The faculty were honored for work in engineering, physics, computation, and medicine. 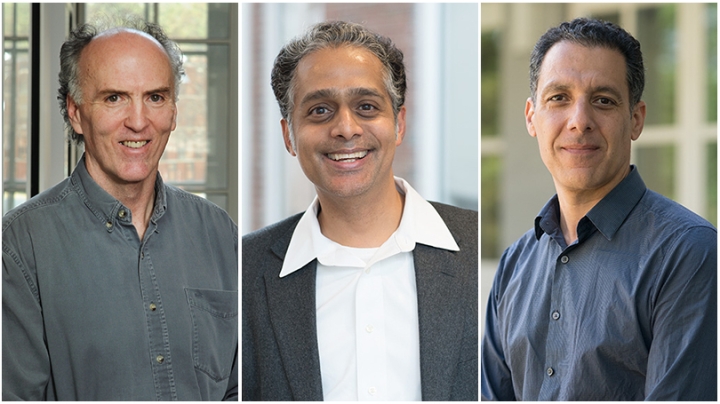 Dartmouth Professors Hany Farid, Paul Meaney, and Rahul Sarpeshkar are being honored as 2018 Fellows of the Institute of Electrical and Electronics Engineers, the world’s leading professional association for advancing technology for humanity.

Fellow status, an honor that is more than a century old, is granted to IEEE members who have demonstrated “extraordinary accomplishment,” according to the institute’s website.

Hany Farid, the Albert Bradley 1915 Third Century Professor of Computer Science and chair of the Department of Computer Science, has been cited by the IEEE board of directors “for seminal contributions to the field of photo-forensics and its application to fighting the exploitation of children around the globe.”

Farid is being recognized for his research in image analysis and digital forensics, a field he pioneered at Dartmouth. Among many other things, Farid has developed mathematical and computational techniques to determine whether images, videos, or audio recordings have been altered. A noteworthy application was Farid’s forensic analysis that demonstrated the authenticity of a controversial photograph of Lee Harvey Oswald holding the alleged assassination rifle. Farid also helped develop a system to find and remove online images pertaining to child exploitation, and is developing a system to scrub the internet of extremist-related content.

“Hany’s research is both technically groundbreaking and incredibly impactful,” says Interim Provost David Kotz ’86, the Champion International Professor in the Department of Computer Science. “Congratulations to him. This is a great honor.”

“Hany’s seminal work in photo-forensics—a field he created—and in automated identification of alike images, has made the world less susceptible to fake news, safer for children, and harder for the spread of terror-related imagery,” says Associate Provost for Entrepreneurship and Technology Transfer Eric Fossum, a professor at Thayer School of Engineering.

Paul Meaney is a professor of engineering at Thayer School of Engineering. The IEEE board of directors cited Meaney “for contributions to microwave tomography and its translation to clinical use.”

Meaney has been researching and testing the use of microwave rays as a new form of cancer imaging, using the same basic technology used in microwave ovens to create an image of breast tissue. Along with 2016 Dartmouth IEEE fellow Keith Paulsen, he has been sending extremely low levels of microwave energy, at about 1/1000th of that of a cellphone, through tissue to generate a three-dimensional image. This not only enables the detection of tumors without the risk of radiation from X-rays, but can be used to monitor the effects of therapies as tumors grow or shrink. Meaney has also researched the use of microwave imaging technology to screen for osteoporosis and risk of bone fracture.

Sarpeshkar is the head of Dartmouth’s first cluster initiative—the William H. Neukom Academic Cluster in Computational Science. Sarpeshkar’s fundamental work has been applied to implantable medical devices, synthetic biology, systems biology, neural prosthetics, bio-inspired, and ultra-energy-efficient systems. He has built low-power and battery-free implants that aid the deaf and paralyzed. He is working on an ultra-fast supercomputer that can test drugs virtually and he is figuring out how to reprogram immune cells to fight cancer. Sarpeshkar plans to build a new kind of supercomputer that would simulate the actions of all the cells in an organ and allow scientists to test drugs in a computer rather than on patients or animals.

“It’s wonderful to see our two Thayer faculty colleagues and computer science chair Hany Farid all recognized by IEEE for their outstanding research accomplishments,” says Thayer Dean Joseph Helble. “Rahul is one of the world’s leaders in developing low-power electronics for biomedical applications, and Paul has been one of the pioneers in developing and then translating to the clinic advances in non-invasive imaging using microwave tomography. Rahul and Paul’s recognition brings to seven the number of current Thayer faculty honored as IEEE Fellows.”

The IEEE, through its more than 400,000 members in 160 countries, is an acknowledged authority on a variety of areas, including aerospace systems, computers and telecommunications, biomedical engineering, electric power, and consumer electronics. Recognizing the achievements of its members is an important part of the IEEE’s mission. Each year, the IEEE Fellow Committee recommends a select group of recipients for elevation to IEEE Fellow.