The associate professor of English was a judge for the 2017 National Book Awards. 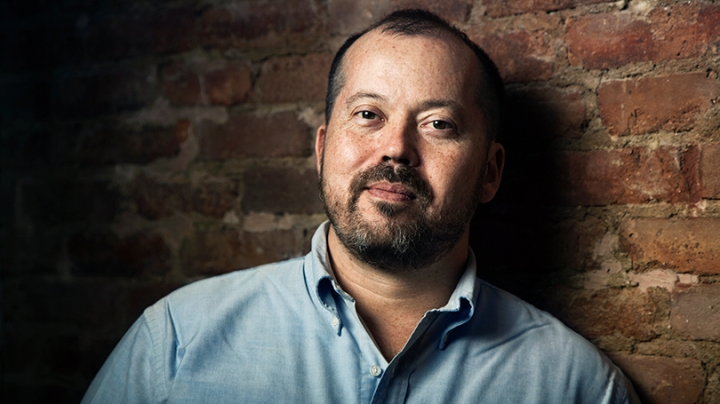 Associate Professor Alexander Chee says judging the 2017 National Book Awards in fiction was like “being a secret agent of the book.” (Photo by M. Sharkey)
11/15/2017
Body

This past year—in addition to teaching Dartmouth undergraduates, editing his forthcoming essay collection, How to Write an Autobiographical Novel, and publishing essays on South Korean filmmakers, Greek islands, and Patricia Highsmith novels—Associate Professor of English and Creative Writing Alexander Chee has been reading. A lot.

The celebrated author of the novels Queen of the Night and Edinburgh was one of five judges for the 2017 National Book Award (NBA) in fiction—one of the preeminent literary awards in the country. The winner, Jesmyn Ward’s Sing, Unburied, Sing, was announced Nov. 15.

“It felt like being on a secret mission. I suppose that’s some sort of childish part of me, but it was like being a secret agent of the book, basically.”

For a self-described evangelist for books, the imposed silence was challenging. “I don’t think I had realized quite how much of my social life—both in person and online—involves talking about what I’m reading, especially when I’m excited about something I’m reading,” he says.

“I’m used to being able to tell anyone I want to about that excitement. It felt very funny to be in social situations with people talking about a book that they were really excited about, and then they would ask me if I’d read it, and I would say, ‘I can’t tell you.’”

Being a judge required Chee to read, assess, compare, and decide about approximately 300 to 400 books (he’s not allowed to say the precise number), most of which arrived in the mail this past spring. “There was a period when they were arriving where it felt a little bit like The Sorcerer’s Apprentice film where the broom and the buckets are swirling around the castle. It was like being someone who had wished for books, and the gods were like, ‘You would like some books? Here are all of the books.’ That part was both thrilling and then also daunting.”

To absorb so many volumes in such a short period of time required a kind of retreat, Chee says. “I had to go back to being the kind of reader I was when I was a kid and I read to be alone, and I was hiding from the world around me inside of the books that I loved and building a fortress out of those books, which I lived inside of.”

As for how the experience has affected his work, Chee is circumspect. “I might not know how this influences my own writing for a very long time, if ever. I think that for most of us, our influences are aspirational. When people ask us, ‘Who has influenced you,’ we’re more likely to list the books that we hope have influenced us, rather than the ones that have, because those are usually invisible to us for a long time after.”

Now that award season is over, Chee plans to keep a few of his favorite books of the year and donate the rest to the Bradford Public Library in Bradford, Vt., where he and his husband, Dustin Schell, live when Chee is in residence at Dartmouth (they still maintain an apartment in New York City). “I’m really impressed with the quality of the library and the central role it has in the life of the town,” he says.