Carol Dunne: Finding a Voice for Women in Theater

The senior lecturer is building a network of women leaders in regional theaters. 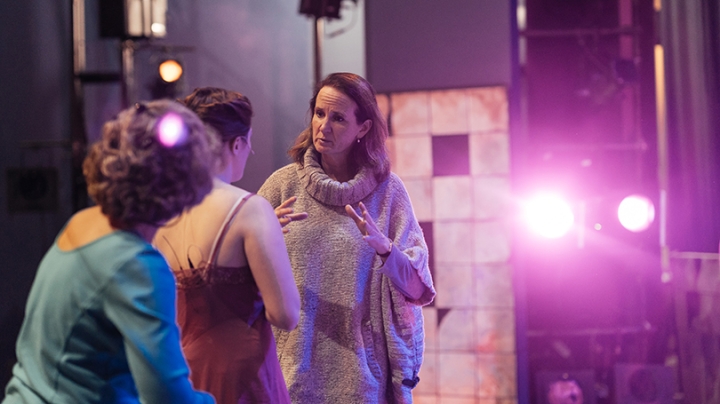 “I think my colleagues would be shocked, but I never expected I would have a career,” says Senior Lecturer Carol Dunne, the producing artistic director of Northern Stage, a professional regional theater in White River Junction, Vt., about the challenges of being an ambitious woman in theater. “It took a very long time to find my voice.”

Now Dunne is committed to helping other women in theater find their voices. This fall, she was awarded a $1.25 million grant from the Pussycat Foundation—funds to be disbursed equally among five regional theaters led by women, including Northern Stage. (The Pussycat Foundation is the legacy of former Cosmopolitan editor Helen Gurley Brown, known for calling her friends by the endearment “pussycat.”)

These theaters will form an initiative called the BOLD Theater Women’s Leadership Circle, creating “a network of women artistic directors in professional theaters across the United States and empowering them to address the issues preventing women from advancing in theater leadership,” according to the initiative’s mission statement.

Dunne acted professionally in New York after graduating from Princeton, but didn’t direct her first play until she was in her 30s, when she became frustrated by her lack of control over the projects she worked on. “I couldn’t not see the mediocrity around me,” she says. An opportunity came up to direct Frank McGuinness’ Someone Who’ll Watch Over Me, about the Iranian hostage crisis, at the Beck Center for the Arts in Cleveland, Ohio.

“I was scared to death. I thought I could do it because the actors were chained to the wall—I thought, they don’t have to move, right?” she says. “I didn’t know how to move the actors around. A week or two into rehearsals, I kept lengthening the chains and moving them, because I realized that there was a movement to the piece that had to happen. I found my voice.” Within a few years, she was directing a fully professional production at the renowned Cleveland Play House.

In 2004, Dartmouth hired Dunne’s husband, Professor of Theater Peter Hackett ’75, who is the Avalon Foundation Chair of the Humanities. Dunne began teaching acting and acting for musical theater classes at the College, and in 2008 she directed the main stage production of Hair.

“Hair was one of the great experiences of my life, because it really felt like everything I had been working towards,” she says. “To work with the Dartmouth students on that first big musical was bliss.” Dunne is now a frequent director of Dartmouth productions, including this fall’s Cabaret.

When Dunne and Hackett moved to the Upper Valley, the region’s theaters were struggling. In addition to teaching at Dartmouth, Dunne took on the job of turning around the New London Barn Playhouse in New London, N.H. “It was a job with a theater with a very large deficit, crumbling facilities, but a really beloved history. I said yes to everything. And I learned through those first years at the Barn that I have a passion for producing theater that affects people’s lives, and for mentoring,” she says.

After five years at the Barn, she was presented with a similar challenge at Northern Stage, where she spearheaded a fundraising campaign to build a new home for the theater, the Barrette Center for the Arts, and expanded its repertoire and educational programming.

Dunne calls Dartmouth’s theater program, Northern Stage, and the Barn “the triangle” of a vibrant regional theater scene. “Because we have Dartmouth here, we have audiences who are curious and willing to take a risk. That makes this community the best audience I have served as a theater artist,” she says.

And the regional theaters benefit Dartmouth. Students have opportunities to apprentice at Northern Stage and the Barn through the theater department’s experiential learning program, or e-term, in which students gain experience and earn professional actors’ union credit, a key step toward a theater career.

It’s a win-win, Dunne says. The students inject fresh energy into the regional theaters, and bring back what they learn to productions on campus. “Many of the students in Cabaret have been through either the Barn or Northern Stage, so there is a calm and a professionalism that I think is rare in undergraduate theater,” Dunne says.

Dunne has been gratified that theater students—especially women—are directing, designing, and performing in their own projects. Last spring saw five productions by and about women on campus. “It means everything to me that our students have a wonderful clarity about the issues facing women in the world today,” Dunne says.

But she’s not entirely sanguine. “I’m still scared for them. I don’t think I realized how difficult my path was while I was on it—I accepted all of it. And I just don’t think the world has changed as much as we wish it had.”

The need for the BOLD Theater Women’s Leadership Circle is clear, Dunne says: Women hold leadership roles in just 17 percent of major regional theaters in the country. “I started running theaters at age 42,” she says. “It’s not a skill-set issue, it’s not a talent issue. There is a ceiling.” She calls the $250,000 each woman-led theater will receive from the Circle “meaningful money—real money that will make things grow.”

And she plans to include Dartmouth students in the effort. One of this fall’s e-term students, Claire Feuille ’18, has already served as an assistant, as has Kyla Mermejo-Varga ’17, who is a postgraduate intern at Northern Stage. “These women are helping me build the BOLD Circle. I’m proud they are a part of a stronger future for women in the theater.”