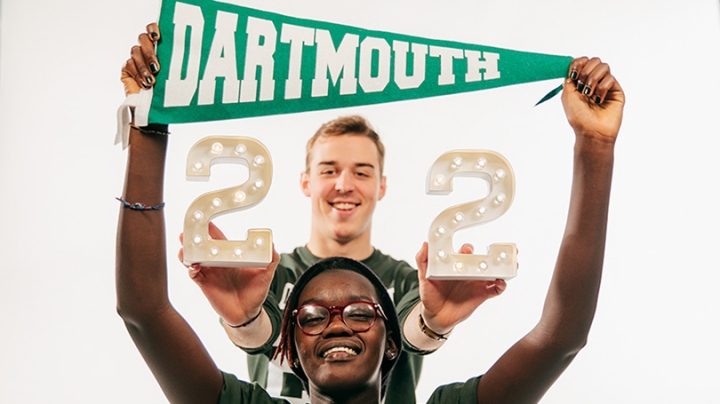 Early decision applications to Dartmouth’s Class of 2022 soared to 13.5 percent over last year’s record pool, reaching an all-time high of 2,270 applications. This year marks the first time the College has received more than 2,000 early applications.

Early acceptances to the incoming class were extended on Dec. 14 to 565 students, for an acceptance rate of 24.9 percent, the lowest since 2010, representing the most selective early decision round in Dartmouth’s history and a clear shift in the demographics of the early acceptance group.

“This year’s early decision pool was significantly larger, academically stronger, and more diverse by every measure, in all the ways we celebrate,” says Lee Coffin, vice provost for enrollment and dean of admissions and financial aid.

In addition to an increase in application volume, the early decision students attained an impressive degree of academic achievement, says Coffin. In high schools that rank their students, 95 percent of those accepted are expected to graduate in the top 10 percent of their class and 105 are the likely valedictorian or salutatorian of their class. That’s almost three times as many early decision valedictorians and salutatorians as were included in the class accepted two years ago.

The students have also set several demographic records: 13 percent will be the first in their family to attend college; 10 percent are foreign citizens; and 33 percent are Americans of color.

The traditional early decision map has also shifted, says Coffin. California is once again the state from which the largest number of students hail, with Texas and Florida joining it, New York, and Massachusetts as this year’s top five states. Accepted students represent 44 U.S. states as well as Washington, D.C., and Puerto Rico. They also represent 23 countries, with Canada, Brazil, Kenya, the United Kingdom, and China making this year’s top five.

The standardized testing profile of the class also improved, with mean scores of 1460 on the SAT and a 33 composite on the ACT. The class is evenly balanced by gender and 17 percent are the children of Dartmouth alumni.

The accepted students include 26 who applied through the College’s partnership with QuestBridge, a national organization that works with high-ability, low-income students. Students in the QuestBridge program qualify for financial aid with no expected parent contribution. This year marks the highest number of students from the program who will attend Dartmouth.

Overall, 52 percent of the students were admitted with financial aid and 12 percent are eligible for Pell Grants, also a record. These federal grants are awarded to students from low-income families.

“The larger-than-usual increase in applications reflects the early success of the College’s recent expansion of recruitment and programming activities as well as our new communications narrative,” says Coffin. “Prospective students are very clearly responding to our story, which celebrates Dartmouth’s teacher-scholar model in this beautiful setting.”

Virtually every applicant was paired with an alumni interviewer through the Admissions Ambassador Program, through which more than 5,100 alumni volunteer to be ambassadors for Dartmouth in their communities.