Nearly 300 Employees Feted for Over 5,000 Years of Service 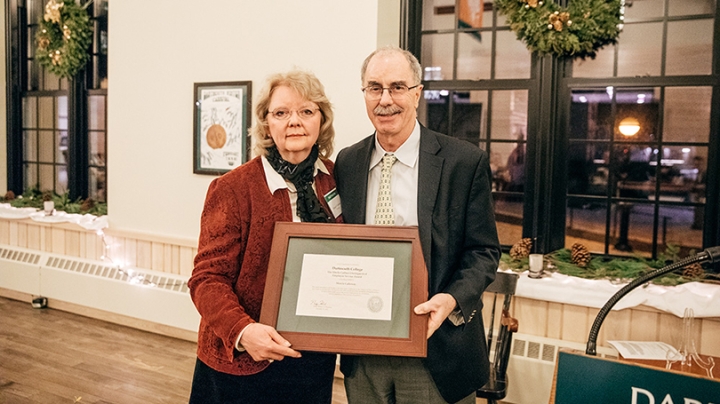 The College has honored Marcia Calloway, the associate director of the Office of Visa and Immigration Services (OVIS) and an adviser to international undergraduate students, with the 2017 Sheila Culbert Distinguished Employee Service Award.

President Phil Hanlon ’77 presented the award at a Dec. 11 dinner, part of the annual Employee Service Awards banquets that this year recognized 297 employees who have reached work milestones totaling more than 5,000 combined years of service.

“I’m especially delighted to be recognizing a member of the OVIS team in a year in which it’s been front and center in assisting our international and undocumented students in navigating such an uncertain and precarious time,” President Hanlon said.

Calloway advises more than 400 undergraduate international students about student visa regulations, issues the documents needed to apply for and maintain U.S. student visa status, and assures compliance with related government recordkeeping requirements. In addition, she advises international students on a range of issues from navigating permissions for part-time work, to obtaining a driver’s license, to planning their post-Dartmouth career.

“A lot of the things that people think of as part and parcel of going to college or living in the U.S. are much more complicated and are all affected by visa status. Our work touches people’s lives in many ways,” she says.

Hanlon said that Calloway was enthusiastically nominated for the Culbert Award by supervisors and subordinates within and from outside her division, “and perhaps most importantly, by the cadre of international students who have come to know her best,” Hanlon said.

President Emeritus James Wright and Susan DeBevoise Wright established the award in 2008 in honor of longtime Senior Assistant to the President Sheila Culbert.

The students Calloway works with are inspiring, she says. “It’s so worthwhile right now to be able to help people from around the world. Dartmouth’s international students are pretty amazing people.”

Mills hailed the gatherings as a chance to celebrate the people who are not often in the spotlight.

“We’re the ones who make sure the stage is set up, and set up safely, we’re running the spotlight, and ensuring everything is running smoothly to ensure that the College’s primary mission—teaching and research—can be done to world-class standards,” Mills said. “And collectively, as a group, I think you are doing an absolutely fantastic job of that. My personal thanks for all of your contributions.”