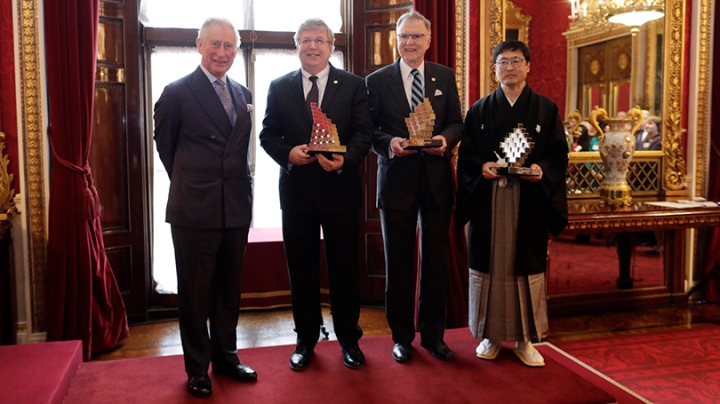 Dartmouth’s Eric Fossum, a winner of the 2017 Queen Elizabeth Prize for Engineering, received the prize from Prince Charles in a Dec. 6 ceremony at Buckingham Palace.

Eric Fossum shows off his award while his wife, Susan Fossum, photobombs the picture. (Photo by Joseph Helble)

Fossum is one of four winners this year of the international 1-million-pound prize, which is the world’s top engineering prize and celebrates groundbreaking innovations in engineering that have had a major impact. This year’s award recognizes the winners’ work in digital imaging sensors over the past half-century.

Fossum is a professor at Thayer School of Engineering, director of Thayer’s PhD innovation program, and associate provost for entrepreneurship and technology transfer. As an inventor, he has received 161 U.S. patents, most notably for the CMOS image sensor that is at the heart of the digital camera-on-a-chip found in today’s smartphones.

“It was humbling to be selected for this award, especially considering how many engineers around the world have since contributed to making this technology what it is today, and to receive the award along with the giants upon whose shoulders I stood when making my own inventions,” Fossum wrote in an email from England.

“In a word, I was ‘gobsmacked’ with the reception in Buckingham Palace. His Royal Highness the Prince of Wales was very gracious and chatted with the winners and their wives. Meeting the future king at the palace was probably a once-in-a-lifetime experience,” Fossum said.

“The Queen Elizabeth Prize honors individuals whose innovations have quite literally changed the world, and that is exactly what Eric Fossum has done,” said President Phil Hanlon ’77 when the news of the award was announced in February.

Fossum plans to donate most of the proceeds of his prize to Camp Invention, particularly its programs that offers services to underserved children in New Hampshire. During its one-week summer camps, the organization encourages kindergarten-through-sixth-grade students to explore science, technology, engineering, and mathematics through hands-on activities.

Fossum’s donation will also support the Talcott Mountain Science Center in Avon, Conn., where Fossum says he “spent many weekends in middle school and high school involved in the experiential learning of science and computing.”

Fossum shares the prize with three others: Nobukazu Teranishi, a research professor at University of Hyogo and Shizuoka University, Japan, who developed the pinned photodiode (PPD), a device incorporated into most CMOS image sensors; and retired Bell Lab scientists Michael Tompsett and George Smith, who were among the inventors of the CCD image sensor that preceded CMOS. (In 2009, Smith shared the Nobel Prize for physics with the late William Boyd, also of Bell Labs.)