Professor: Moore Did Worse Than Trump in Every Alabama County 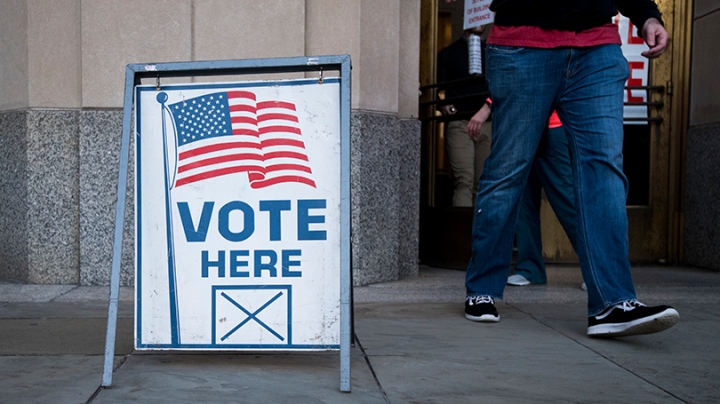 Voters exit the polling station at the Jefferson County Courthouse in Birmingham, Ala., on Tuesday, Dec. 12. (AP Photo/Bill Clark)
12/18/2017
Body

Republican Senate candidate Roy Moore lost vote share in every Alabama county compared to votes for Donald Trump in the 2016 election, and that gap grew in counties with higher education levels, Dartmouth’s Michael Herron shows in a chart he created right after last Tuesday’s special election.

Former federal prosecutor Doug Jones won Alabama by 1.5 points, making him the first Democrat in a quarter century to win a Senate seat in the safely Republican state.

Herron, the Remsen 1943 Professor of Government and chair of the Program in Quantitative Social Science, says he was curious to see what role education played in Moore’s defeat in light of data indicating that Trump drew disproportionate support from less educated, male voters in 2016.

“Moore didn’t do very well compared to Trump. Looking at the plot, you will notice that all the values are negative. That means Moore did worse than Trump everywhere. But some counties are more negative, and what you can notice is that the more educated the county, the more negative it is for Moore compared to Trump,” says Herron, whose current work focuses on elections and statistical methods.

For each Alabama country, Herron plotted Moore’s percentage of the vote relative to Trump’s against the average level of education measured by the percent of a county’s residents having at least a bachelor’s degree. The size of each county dot in the plot is proportional to the number of votes cast in the 2017 election. In addition, majority black counties are indicated with black circles and all others are indicated with white circles.

Chart: Education and the Moore-Trump Difference Across Alabama Counties

Note: County dots proportional to, and regression lines weighted by, votes cast in the 2017 special election. The chart does not include two counties that have not reported write-in vote totals. Chart courtesy of Michael Herron.

Consider, for example, Tuscaloosa County, in the lower middle quadrant of the chart. This county has a white majority, about 16 percent of the county’s population has a bachelor’s degree or higher, and Moore’s vote share in Tuscaloosa was approximately 17 percentage points lower than Trump’s in 2016.

Herron cautions that the chart does not indicate the vote totals for the Republican candidates in the two elections, nor whether the people who cast votes were black, white, highly educated or less educated.

“You cannot tell from the plot whether Tuscaloosa was high or low on Trump, all that is plotted is the difference,” Herron says. “Also, when we look at Tuscaloosa, we don’t know if it is the same people voting. That’s a limitation when we deal with aggregate countywide data.”

Herron says he pulled the chart together the day after the election, using historical election returns, census data, racial voter registration data, and current election results, as a quick way to try to understand Alabama’s unusual results. Right now, he is not planning a paper on the election, but the results have already sparked other questions that he or his students may want to pursue in the future, he says.

Among other things, the Program in Quantitative Social Science teaches students how to merge data from disparate sources and visualize statistical relationships. Showing trends within a graph is a straightforward and powerful way to understand a subject, Herron says.

“This plot tells an interesting story that should spark people to think. It doesn’t show that educated people voted in a certain way. There are any number of things that could correlate with education—class, economic opportunity, evangelical identification—but if you are asking, ‘what were the major features about this special election,’ this would suggest that you’d better at least think about the role of education.”