The popular fellowship supports faculty in communicating their expertise in the media. 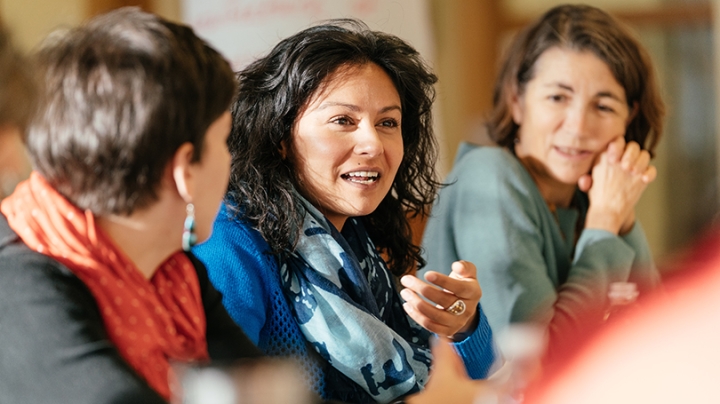 When Assistant Professor of German Studies Petra McGillen published an op-ed in The Conversation on 19th-century “fake news,” she didn’t expect to find a new avenue for research.

McGillen was a 2017 Public Voices Fellow—one of 20 faculty members this year who participated in an intensive program that trains scholars how to bring their expertise to a broader audience. Public Voices is a partnership between Dartmouth and The OpEd Project, an organization that seeks to increase the impact of the nation’s top scholars—particularly under-represented voices.

The program is celebrating its fifth anniversary this year. Dartmouth joined the pilot initiative thanks to the efforts of  Associate Professor of Government Jennifer Lind and Professor of English Colleen Boggs, who were both fellows in 2012-2013.

McGillen’s article described how a German journalist fabricated an eye-witness account about a fire in London—from his desk in Berlin. “What I learned about the 19th-century media scene completely transferred to today’s media scene,” McGillen says. “All of a sudden, I was able to provide insights on how fake news is blossoming and what makes it credible. That was great.”

And questions from readers prompted her to dig deeper. “Now I’m seriously working on the history of fake news, and it’s probably going to end up in another research project.”

The program has so far trained 75 faculty members in the art of developing, crafting, and pitching opinion pieces to the media. Fellows meet four times in intensive seminars to brainstorm and share work, and are paired with media professionals for mentoring on what editors want—and how to persevere if their work is rejected.

Assistant Professor of Music William Cheng, a 2014-2015 Fellow, likes to share his compilation of rejections—43 between February and November 2015—with new fellows. “I think it makes them feel better about rejections, which happen to everyone,” he says.

The program facilitates collaboration across disciplines. For example, McGillen is currently writing an op-ed with a professor from the Tuck School of Business. Public Voices, she says, “is just fabulous when it comes to connecting you with colleagues.”

The 2017 Public Voices Fellows at one of four intensive seminars designed to teach the art of developing, crafting, and pitching opinion pieces to the media. (Photo by Eli Burakian ’00)

Julie Kim, a pediatric oncologist and associate professor of pediatrics at the Geisel School of Medicine and a 2017 Public Voices Fellow, says the program’s emphasis on helping participants own their professional and personal expertise is “liberating.” Kim has published nearly a dozen op-eds on topics such as how doctors handle racist patients and her father’s recent visit to his native North Korea.

“It was eye-opening to be told you are an expert in your own personal expertise, and to own that and feel like it’s worthwhile,” Kim says.

Before becoming a doctor, Kim earned a master’s of fine arts in creative writing. Now she’s discovering that her writing skills help her communicate with a broad public. “There’s a skill to being able to put scientific or academic jargon into language that laypeople can understand,” she says.

An op-ed advocating for the creation of family drug courts to protect children—including some of Kim’s patients—whose parents struggle with addiction is changing state policy. “It got picked up by the National Association of Family Drug Courts just as they were trying to think about bringing the drug court system into New Hampshire,” Kim says. “I was able to be part of a working group that’s trying to start up family drug courts in New Hampshire, so that’s a positive contribution.”

Associate Dean of Arts and Humanities Barbara Will, also a 2017 Fellow, published op-eds on American women who died in Vietnam, the cultural significance of last summer’s solar eclipse, and the detention of a French Holocaust scholar by U.S. Customs. She calls the program “profoundly transformative.”

“Doing this fellowship in conjunction with my administrative job has been so rewarding because it has forced me to reassess my career in general,” says Will, who is the A. and R. Newbury Professor of English. “It has brought me back to my writing and to topics that really matter to me.”

Cheng says he participated in Public Voices “to test the boundaries of what I could say and how I could say it. I saw it as an opportunity to grow, to be uncomfortable, and to crane my neck around the borders of academia.” He has published op-eds on topics from Gamergate to the sexism inherent in the term “shrill.”

“I had a lot of fun writing the Slate article called ‘My Students Never Use the First-Person Voice. I Wish They Would.’ It drew from my reflections on teaching at Dartmouth,” Cheng says. “And I had no fun writing the Washington Post article ‘I’m a Musician Who Can’t Play Music Anymore,’ but I am glad that it’s out there.”

That latter piece, a personal reflection challenging narratives around the healing properties of art, struck a nerve with readers. “I began receiving lots of emails from colleagues and strangers alike: disabled musicians, professors, students. They would share their own stories, often in searing detail, and sometimes, as they noted, sharing for their first time.”

At a recent reception, Vice President for Communications Justin Anderson told current and past fellows that the program has far exceeded his initial goal of seeing more faculty voices in the media.

“I went into this thinking about it transactionally,” Anderson said. “What I failed to appreciate was that it is transformative.”

Katie Orenstein, the founder and CEO of the OpEd Project, ran through Dartmouth’s numbers—more than 240 published pieces in national publications like The Washington Post to local outlets like the Valley News, as well as television, radio, and documentary film appearances. “Based on outlet circulation and social media, we can conservatively say that your ideas have reached over 100 million unique viewers, listeners, and readers, leaving an undeniable footprint on the public conversation.”

Public Voices participants say the program is a lot of work, and not for everyone. But, says Kim, “It’s so much fun. I’m having a great time doing it.”

The 2018 Dartmouth Public Voices Fellowship begins in February, and applications are open now. Faculty can apply or learn more by emailing Associate Vice President for Communications Diana Lawrence or calling (603) 646-8222.