Hundreds of greetings to the poet are preserved in the Dartmouth Library. 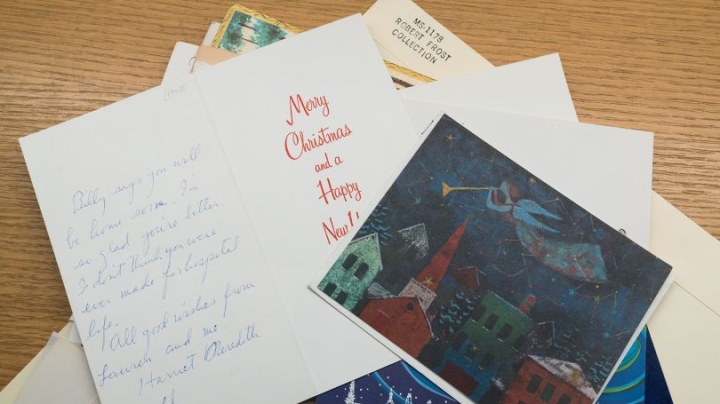 In Dartmouth Library’s Rauner Special Collections Library, stacked upright in a cardboard box, are 13 manila folders, each bulging with Christmas cards sent to the poet, who attended and later lectured at Dartmouth, and received an honorary degree in 1951. The cards are addressed, usually in neat handwriting, to his home in Vermont or in Cambridge, Mass. Many are filed along with envelopes, cleanly slit with a letter opener.

The mid-century illustrations run the gamut from cartoonish reindeer to sedate winter scenes reminiscent of Frost’s own poetic landscapes. Most cards are signed by hand. Postmarks date from 1906 to 1962, a year before Frost’s death, though the vast majority are from the 1950s and ’60s. By then, Frost’s wife, Elinor, and four of their six children had died, and he lived alone, but traveled frequently for speaking and teaching engagements.

It’s well known that Frost sent beautifully illustrated booklets of his poems to close friends and literary associates around Christmastime. The hundreds of cards he received and carefully preserved suggest that, at least in the last two decades of his life, he also welcomed holiday correspondence, even from hotel chains he frequented and fans he had never met. Messages ranged from a hastily scrawled “Dear Robert, Merry Christmas” on a doctor’s prescription pad (from Merrill Moore, a poet and psychiatrist) to notes from his friend May Sarton, who sent him, in 1957, “with love,” the title poem from her then-new book, Minting Time, and, in 1962, another poem, A Recognition.

Amateur work, as well, came his way at Christmas. (In those days, it was possible to get a famous poet’s attention merely by addressing a holiday card to “Robert Frost, Ripton, Vermont.”) Elizabeth and Henry Peterson composed these lines:

Sleigh bells and mistletoe
Deep woods and shining snow
Fire light and candles gay
And thoughts of you on Christmas Day.

“We should have the presumption to write poetry to you,” they added in a postscript.

Maurice Peloubet, an accountant and occasional poet, rhymed glumly in 1962:

Things are now in such a way
With a fresh, new crisis every day,
It doesn’t leave one much to say.

The Rauner box includes a few cards from colleges and universities, including one from the Friends of Dartmouth Libraries, with a woodcut of Frost’s Shaftsbury, Vt., farm on the front.

One of Frost’s poems was used as a holiday card by publisher Henry Holt & Co., which, ironically, sent it to the author. Christmas Trees (A Christmas Circular Letter) is wryly narrated by a “country” man who refuses to sell a forest of balsams to a city slicker offering only three cents per tree. It concludes:

A thousand Christmas trees I didn’t know I had!
Worth three more cents to give away than sell,
As may be shown by a simple calculation.
Too bad I couldn’t lay one in a letter.
I can’t help wishing I could send you one,
In wishing you herewith a Merry Christmas. 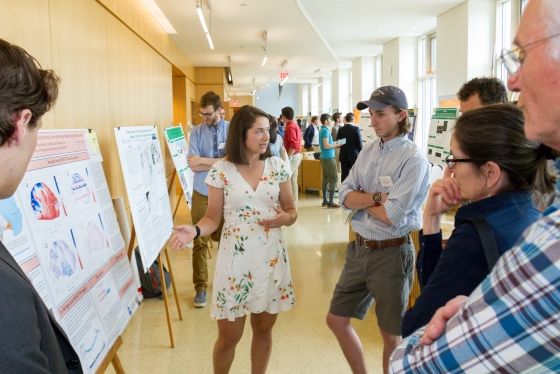