Students Attend a Conference of Women in Computing

Dartmouth undergraduates joined 18,000 other women at the 2017 Grace Hopper Celebration. 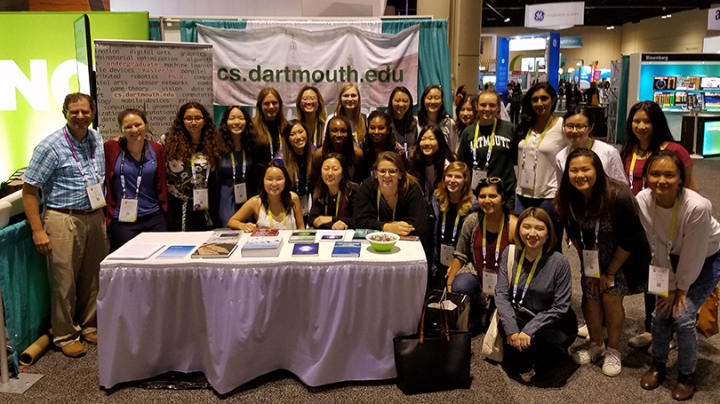 Thirty-one Dartmouth undergraduates joined nearly 18,000 other women for the Grace Hopper Celebration of Women in Computing this fall in Orlando, Fla.

Named for Grace Hopper (1906–1992)—an American computer scientist, United States Navy rear admiral, and pioneer in computer programming—the conference has annually highlighted the contributions of women to computer science since 1994.

Professor Tom Cormen led the contingent of students taking part in the world’s largest technical conference for women in computing where they mingled with some of the brightest stars in industry, academia, and government.

“Dartmouth computer science has been an academic sponsor of the conference since 2012,” he says, “and the department sponsored 28 of our attendees. Three others had outside sponsorships from Microsoft or Google.”

Alma Wang ’18 described the conference as “an unforgettable experience full of truly inspiring moments of female leaders in tech.” She says that the first keynote speech was her favorite part. “Fei-Fei Li left me in awe of not only her accomplishments, but of the work ethic that drove her to achieve such high standing at Stanford and Google.” Li is a professor of computer science at Stanford University and the chief scientist of artificial intelligence (AI) and machine learning at Google Cloud.

“It was amazing being able to hear Melinda Gates talk as well as other speakers talk about their own projects and fields of expertise while also having the opportunity to personally interact with the countless employees of numerous companies at the career fair,” adds Catherine Zhao ’20.

“Year after year, we find the students who go to the Grace Hopper Celebration are inspired and bolstered in their interest and resolve in computer science,” says Cormen.