Studying the Stars in the South African Sky

For Dartmouth astronomers and students, a trip to South Africa fuels research. 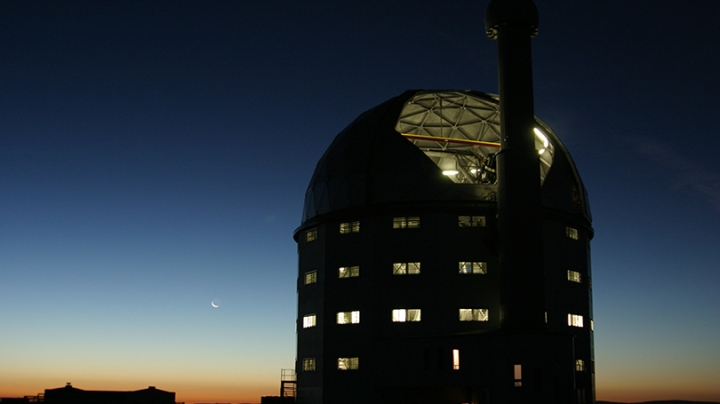 Raphael Hviding ’18 has passed a milestone unusual among undergraduates: He is first author on a paper that has just been published. The paper, based on his research on quasars, appeared in the November issue of Monthly Notices of the Royal Astronomical Society.

Ryan Hickox, an associate professor of physics and astronomy and Hviding’s research adviser, is second author on the paper, which reports on a search for quasars—some of the brightest, oldest, most distant, and most powerful objects in the universe. Much of the data they used in their study came from observations using the Southern African Large Telescope (SALT), an instrument Hviding would eventually visit during a foreign study program.

“Where the quasars are in the sky can tell us about the history of the universe, understanding how galaxies grow and change in form,” Hviding says.

Hickox says quasars are “extraordinary objects in which huge amounts of radiation are produced by enormous black holes at the centers of galaxies. A single quasar can give off as much light as a trillion suns.”

Powered by massive black holes at the center of most known galaxies, quasars can emit enormous amounts of energy, covering the entire electromagnetic spectrum, from radio waves to X-rays and gamma rays.

Hviding says that while X-rays are the “go-to” path to quasar identification, some quasars seem to have no detectable X-ray emissions, and may be hidden by concentrations of interstellar dust and gas that X-rays cannot penetrate. He and his co-authors turned to radiation in infrared wavelengths, which is produced by the hot dust around the quasar and is not as easily absorbed as X-rays. This approach allowed them to see through the material around the hidden black hole. They targeted 46 potential quasars observed with the SALT.

“We generated a new classification method in the IR for picking them out,” Hviding says. “We started to draw attention to the idea that there are objects out there that are obscured by columns of dust and gas, so thick that even X-rays cannot penetrate them to the detection capabilities of our instruments.”

Of the objects to be analyzed, the SALT data conclusively identified 70 percent as heavily obscured quasars, supporting the new MID-IR selection methods. “This validated our premise that there are hidden quasars out there,” Hviding says.

As it turns out, the undergraduate got a chance to visit the SALT telescope during a visit to South Africa last year. He had signed up for Dartmouth’s Astronomy Foreign Study Program, which took 13 undergraduates and two graduate students to South Africa during winter term 2017. The FSP began with classroom sessions in Cape Town on astrophysics and the stars of the Milky Way taught by Professor Brian Chaboyer, who originally developed and now directs the biennial program.

Professor John Thorstensen also taught them about observational techniques and then followed up with a student trip to a mile-high hilltop near Sutherland, about 250 miles north of Cape Town, where SALT shares the site with more than 20 other telescopes operated by the South African Astronomical Observatory.

“The night sky in Sutherland is a spectacular place to see the stars, and I knew that if we could get the students down there, it would really be a tremendous experience,” says Chaboyer.

For Hviding, it was a dream come true. He conducted astronomical observations at the same facility that had produced the foundation for his published research.

For another participant on the FSP, Meridith Joyce, a fifth-year PhD student working with Chaboyer, the trip to South Africa provided valuable research opportunities. Joyce, a teaching assistant on the FSP, joined the undergraduates at a lecture by Shazrene Mohamed, an SAAO staff astronomer and lecturer at the University of Cape Town. Mohamed spoke to them about her research on the chemical composition of stars, an area of investigation that captured Joyce’s interest. A meeting after the presentation led to an invitation for Joyce to make a return trip to Cape Town, where she and Mohamed collaborated on research in stellar evolution.

“The breadth and caliber of the astronomical resources available in South Africa were incredible, from the instruments to the faculty,” says Joyce. “I came away from the place with an expanded appreciation for the entire enterprise.”