Fifteen athletes with ties to the College will compete in the 2018 Winter Games. 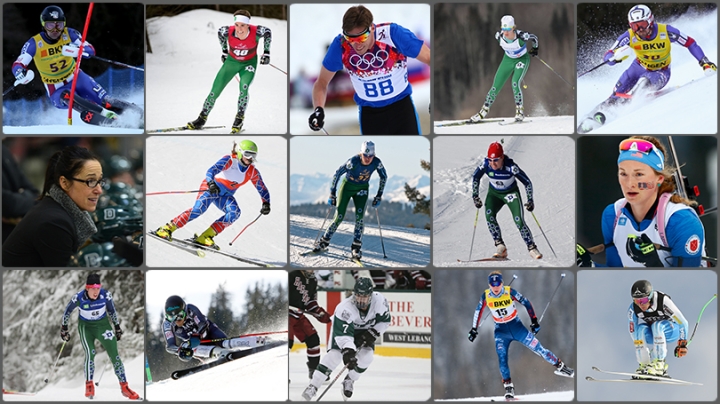 With 15 competitors headed to the 2018 Winter Games in Pyeongchang, South Korea, “Dartmouth College’s Olympic skiing reputation continues to grow,” Team USA proclaimed in a headline this week. Two more Dartmouth Nordic skiers were named to Team USA Friday when the final rosters were announced in a live-streamed press conference from Boulder, Colo.

The two Dartmouth skiers added to the U.S. Nordic team Friday—Patrick “Paddy” Caldwell ’17 (a cousin of team member Sophie Caldwell ’12) and Annie Hart ’14—were discretionary picks based on this season’s results. Team USA added a total of 10 slots to the cross-country team on Friday, bringing the total to 20, following late negotiations between national sport governing bodies comprising the International Olympic Committee.

A lot of that success grows out of the history and tradition at Dartmouth, says men’s alpine skiing coach Peter Dodge ’78, a former U.S. Ski Team champion himself. Another key is the D-Plan, which enables athletes to take time off and focus on their sport, while continuing to pursue their education.

“Take a guy like Dave Chodounsky ’08. He came here, skied for Dartmouth for four years, won an NCAA championship, and finished in four years with a degree in engineering and Earth sciences, and then pursued high-level World Cup and Olympic competition,” Dodge says.

Another Dartmouth skier who took advantage of the flexibility of Dartmouth’s D-Plan to compete in the Olympics during his sophomore year, finish his degree while skiing for the College, and then go on to compete in a second Olympic games is Tiger Shaw ’85.

Shaw, who raced for Team USA in the giant slalom in Sarajevo in 1984 and finished ninth in GS in Calgary in 1988, is president and CEO of U.S. Ski & Snowboard, the governing body for U.S. ski sports. Shaw was part of the IOC member discussions this week to set the final number of athletes each national team was allocated.

“We’ve been simultaneously picking teams in each sport, and dynamically being reallocated Olympic starting spots that weren’t being used by other countries. It’s a crazy process that occurs in a matter of hours,” Shaw said late Thursday while traveling back to Park City, Utah, from the IOC member meeting.

Shaw agrees that Dartmouth’s skiing tradition, the flexibility of the quarter system, and the commitment to excellence in both athletics and academics make the College a truly remarkable place.

Shaw sees the possibility of the U.S. Nordic team making history at the 2018 Winter Games. “Cross-country, which is pretty heavily populated with Dartmouth women—and men with the addition of Paddy Caldwell ’17—is extraordinary in terms of their medal threat this year,” he says.

“The only Nordic Olympic medalist for the U.S. is Bill Koch in 1976, so if Ida Sargent ’11 or Sophie Caldwell ’12 were to medal, it would be extraordinary, because they would be the first women cross-country skiers to ever medal for the U.S.,” Shaw says.

“Dave Chodounsky has been struggling a little bit this year, but he’s still the top U.S. prospect in Slalom. Tommy Ford can be very fast, and Nolan Kasper has been just a huge surprise,” says Dodge. “He just got back on skis a couple of months ago, and now he’s qualified for the Olympics. And Weibrecht comes on in the Olympics every time, so you never know about him. He can always throw one down.”

Here’s the lineup of Dartmouth-affiliated athletes who are competing in the 2018 Winter Olympic Games:

Rosie Brennan ’11 will make her Olympic debut with Team USA in cross-country skiing this year. The Dartmouth geography major had strong showings at the world championships in 2015 and 2017 and placed third at a World Cup relay in December 2015.

Patrick “Paddy” Caldwell ’17 is a first-time Olympian whose father, Tim Caldwell ’77, competed on cross-country skis in four Winter Olympics, and whose cousin, Sophie Caldwell ’12 is a teammate at this year’s Winter Games. As a Big Green skier, the geography and economics major was named All-American as a first year and took 10th at the Junior World Ski Championships that same season.

Sophie Caldwell ’12 competes in a cross-country skiing event during her time at Dartmouth. (Photo by Paul Bussi)

Sophie Caldwell ’12 raced with Team USA in Sochi in 2014, placing sixth in sprint freestyle and eighth in the team sprint classic. The five-time All-American Dartmouth skier had an outstanding Olympic qualifying season, most recently finishing second in the World Cup team sprint event in Dresden, Germany.

David Chodounsky ’08 will compete in men’s slalom with Team USA in Pyeongchang, making the team in the final qualifying World Cup event on Jan. 21. The two-time Olympian was also a standout athlete at Dartmouth, winning the NCAA slalom title as a first-year skier on the men’s Alpine team.

Emily Dreissigacker ’11, a first-time Olympian on the 2018 USA biathlon team, was a standout athlete on the Dartmouth women’s rowing team, where she was named All-American in 2009 and 2010. She took up biathlon in 2015, and competed with the Craftsbury Green Racing Project team.

Susan Dunklee ’08 placed seventh in biathlon relay and eighth in mixed relay with Team USA in the Sochi Olympics in 2014. She says she has skied since she was 2 years old, but only took up shooting at age 22, finishing in the top 12 of five consecutive biathlon World Championships since. At Dartmouth she earned division honors with the women’s cross-country track team and the women’s Nordic ski team.

Tommy Ford ’12 qualified for the 2018 U.S. Olympic Team in giant slalom on Jan. 6, the culmination of a five-year comeback after what many considered a career-ending fracture of his right femur while free skiing in 2013. Ford’s last Olympics were in 2010, when he placed 26th in the giant slalom for Team USA in Vancouver.

Annie Hart ’14 speeds over a hill during a race with the Big Green. (Photo courtesy of Dartmouth Athletics)

Annie Hart ’14 is a first-time Olympian who earned All American honors five times in her Dartmouth cross-country career. Hart graduated from Dartmouth with a degree in government and went on to top-flight finishes in the FIS U23 World Championships in sprint classics and skiathlons.

Nolan Kasper ’14 competed in the 2010 Olympics in Vancouver, was sidelined with injuries in 2013 but came back for the 2014 Games in Sochi, where he was top American slalom finisher. Ski Racing magazine has dubbed him the “comeback kid” after recovering from yet another knee injury to compete for Team USA in the slalom in the 2018 games.

Staci Mannella ’18 was the youngest member of the U.S. Paralympic Alpine Skiing Team at the Sochi 2014 Games when she was 18. Now she is one of the top visually impaired skiers in the world. Mannella splits her time on the snow and in the saddle as a member of the Dartmouth equestrian team. The Paralympics Winter Games run March 9 through 18 in Pyeongchang.

Tucker Murphy ’04 will represent Bermuda in cross-country skiing at this year’s Winter Games. Murphy, a Dartmouth Rhodes scholar, raced cross-country in Sochi in 2014 and in Vancouver in 2010. Murphy is the third Bermudan to ever participate in the Winter Olympics, and the first to compete in Nordic skiing.

Ida Sargent ’11 will be competing at her second Olympics in cross-country skiing. At the Sochi Olympics in 2014, Sargent finished 19th in the sprint freestyle and 34th in the 10-kilometer classic. At Dartmouth, Sargent was the Nordic team rookie of the year and an NCAA Academic All-American. The Orleans, Vt., native majored in biology and psychology, and says she hopes to become a physical therapist after her run as a competitive skier.

Laura Stacey ’16, named to Team Canada’s women’s hockey team, was a Dartmouth women’s hockey standout from her first year, becoming team captain in her senior year and earning a long list of honors along the way, including All Ivy First Team and Academic All Ivy. The economics major graduated in four years before going on to play in the Canadian Women’s Hockey League.

Andrew Weibrecht ’09 earned a silver medal in the super-G with Team USA in Sochi 2014, and a bronze in the super-G at the 2010 games in Vancouver. Weibrecht, who has been competing at the highest level for nearly 15 years, is known as “War Horse” for his tenacity in overcoming injuries and in managing to qualify and medal in the Olympics despite several mixed World Cup seasons.

The Pyeongchang Winter Olympics run Feb. 9 through Feb. 25. The games will be broadcast on NBC, NBCSN, and across the networks of NBC Universal. The opening ceremony will be rebroadcast on NBC stations at 8 p.m. Friday, Feb. 9. Live coverage will be streamed that day through NBC Universal’s networks starting at 6 a.m. Eastern Standard Time (8 p.m. Korean Standard Time.) NBC stations will rebroadcast portions of each day’s events during prime time.