Students get a firsthand look at the transition from communism to a market economy. 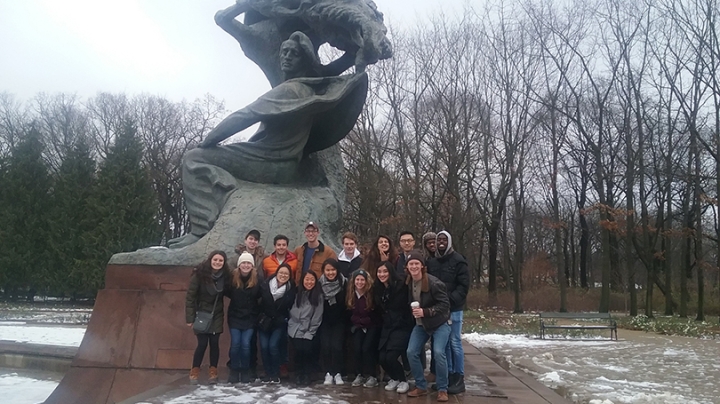 Carmen Braceras ’20 spent the fall term studying the transformation of Poland to a market economy, but it was a tour of Saint Mary’s Basilica in Krakow during the winter break that gave her an insight into the Polish perspective, she says.

The uneven towers of the brick Gothic church dominate the city’s main market square, where Dartmouth students were touring with some of their counterparts from the Krakow University of Economics. One of the Polish students told Braceras about the legend of the two brothers who were each building one of the church towers.

“One brother got jealous that his brother’s tower was taller, so he killed his brother,” Braceras recounts. “The knife that was supposedly used to kill the brother hangs on the wall of the Renaissance Cloth Hall, across the square from the Basilica, and acts as a warning against jealousy. This story and several others like it gave me an interesting insight to Polish culture, the importance of history to the Poles, and the tendency Poles have to use ancient legends to explain current phenomena.”

Braceras and 15 other students in Senior Lecturer Elisabeth Curtis’ class “The Transformation of Poland to a Market Economy” explored economics theory, studied the country’s economic history, looked at reform and privatization efforts, and learned some Polish during the fall term, when they also began small-group research projects on an aspect of the Polish economy.

Then, during the winter break, the class flew to Warsaw, where they set up a home base at a hostel in the capital and began a two-week immersion experience in applied economics and policy that included a week in Krakow and weekend trips to Zakopane, Oswiecim, and other cultural and historical destinations. During the visit the students also arranged their own interviews and conducted research in their chosen topics with Polish economists, policymakers, students, professors, and business leaders.

In the three years that Curtis has taught the applied economics course on Poland, she has developed a network of contacts, including Warsaw School of Economics Professor Bogdan Radomski, who is director of the Council on International Educational Exchange in Poland; and Warsaw School of Economics Professor Leszek Balcerowicz, former deputy prime minister and former chairman of the National Bank of Poland, who was one of the architects of Poland’s economic reforms in the 1990 after the fall of communism.

Curtis, whose work focuses on countries moving from a more centrally planned economic system to a market system, and who has done extensive research in the Ukraine, says Poland is an ideal laboratory for the study of transitional economies.

“From a developmental standpoint, from a transitional standpoint, in terms of how well a country has done adjusting to the market structure, and opening up to the rest of the world, Poland is an absolute, obvious first place to go,” she says. “They’ve done incredibly well, and they’ve done this in a relatively short period of time. It was only in 1989 that they were communist, so in 25 to 30 years, they’ve completely changed their economic structure.”

Over the time that Curtis has taken the class to Poland, students’ research has continued to build on the work from prior trips, she says. “With so many educated young people leaving Poland, former Econ 70 students have learned there is a disconnect between university educators and administrators, the government, and the workplace.”

For the latest Poland trip, Curtis framed the research theme around these discoveries. She encouraged student research groups to study a component of the economic transformation of Poland and make a case that Poland can be used as an example for future reforms, and then assess the current challenges facing the progress of Poland in this area as it continues to develop.

At the end of the trip, Curtis’ students hosted all-day sessions at both the Warsaw School of Economics and the Krakow University of Economics where each group presented their research to educators, employers, students and university administrators, focusing on the theme of improving opportunities for university-educated Poles as they enter the labor force.

Braceras’ group studied the rise of the nationalist Law and Justice Party, known in Poland as the PiS, which is currently in power. “We analyzed what economic factors may have led to their election in 2015, what the economic effects of their policies have been so far, and what the outlook is for future growth of the Polish economy,” she says.

The class framework is designed as an “immersion experience in applied economics and policy,” with classroom studies in the fall term followed by a two-week practicum over the winter break. Based on the template created by Economics Professor Diego Comin, the course takes advantage of Dartmouth’s long winter break to allow for shorter immersion experiences combined with the traditional term of coursework, Curtis says.

“Economics does not have an FSP (foreign study program),” Curtis says. “Based on a similar program at Harvard Business School, Diego suggested the model and we proposed a class that meets in the fall and then added an off-campus immersion experience. It fit nicely with Dartmouth’s calendar, while also availing the department the opportunity to have this sort of study abroad experience, but not commit the full 10-to-15-week term to it.”

Bill Platt can be reached at William.c.platt@dartmouth.edu.