He joins students from 20 countries as one of the inaugural scholars in the fellowship program. 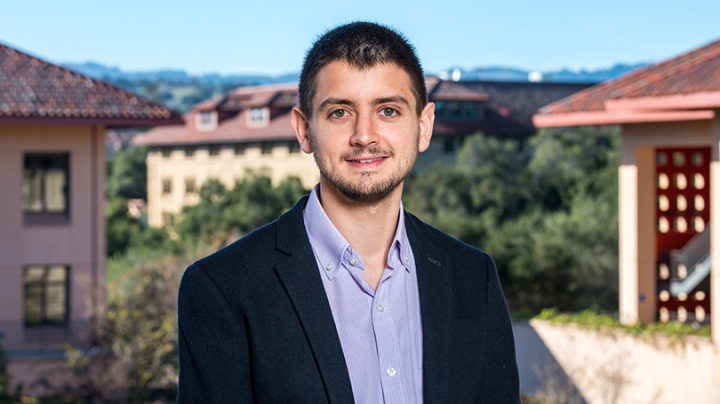 Asaf Zilberfarb ’17 plans to pursue a master’s degree in international policy studies at the Stanford School of Humanities and Sciences. (Photo courtesy of Stanford University)
2/20/2018
Body

Asaf Zilberfarb ’17 has been named a Knight-Hennessy Scholar, joining students from 20 countries as one of the inaugural scholars in the program, in which the fellows pursue graduate studies at Stanford University. He plans to pursue a master’s degree in international policy studies at the Stanford School of Humanities and Sciences.

A second Dartmouth alumni fellow has asked not to be listed in the College’s announcement.

“I am so proud that the College has two alumni who have shown courageous intellectual leadership at Dartmouth and beyond and will be among the first class of Knight-Hennessy Scholars,” says Interim Provost David Kotz ’86.

“The Knight-Hennessy scholarship is a real honor, not only for Asaf but for Dartmouth,” says Associate Professor of Government Benjamin Valentino, one of Zilberfarb’s closest mentors. “Asaf represents the aspirations we have for all our students—he wants to use the tools and opportunities he acquired here at Dartmouth to make the world a better place. I think the Knight-Hennessy scholarship will help him do that.”

The scholarship, announced in 2016, is named for Stanford’s 10th president, John L. Hennessy, and for Nike, Inc. co-founder and philanthropist Phil Knight, a 1962 graduate of the Stanford Graduate School of Business, who donated $400 million dollars to the program. The scholarship “aims to prepare a new generation of leaders with the deep academic foundation and broad skill set needed to develop creative solutions for the world’s most complex challenges,” according to Stanford.

“This program brings together the best students from around the globe,” Knight says. “I expect they will become leaders in all sectors, both public and private, and find breakthroughs that will improve the world.”

Zilberfarb, from Kfar Ha’Oranim, Israel, says hopes what he learns at Stanford will open opportunities “to make a positive impact on the world, starting at the very local scale—with myself and my community. Then we can begin tackling larger, more complex, problems. That’s the ultimate goal.”

A journalist at The Media Line news agency, Zilberfarb has worked as a research assistant at the Middle East Institute in Washington, D.C., and spent a term studying at the London School of Economics. Before coming to Dartmouth, he spent three years as a platoon leader and intelligence analyst in the Israeli Defense Forces, receiving a Major General Award for exceptional performance and creativity.

At Dartmouth, Zilberfarb was a recipient of the Eyal and Marilyn Ofer Family Foundation Scholarship, which is awarded to high-achieving international students. He double-majored in government and geography, graduating magna cum laude. “My professors, some of whom have been mentors to me since quite literally my first week at Dartmouth, have continuously pushed me to challenge myself to go farther than I ever thought I could,” he says. “Being able to interact with faculty members outside the classroom, conduct my own research, take internships on leave terms, and study abroad helped shape my career interests and prepare me for what’s in store after graduation. That and, of course, the incredible Dartmouth community—which is as lively away from Hanover as it is on campus.”

Outside the classroom, Zilberfarb was student programming coordinator of Dartmouth Hillel, vice president of the Dartmouth International Students’ Association, and a student director of the War and Peace Fellows Program at the John Sloan Dickey Center for International Understanding. He also traveled to Beijing, China, as a Paganucci Fellow, to work on a consulting project that developed business models for an NGO serving migrant children.

Zilberfarb says he is humbled to be an inaugural Knight-Hennessey scholar.

“It might seem like an individual accomplishment, but this would have never been possible without the incredible support of those around me—my amazing family, my friends, and, perhaps above all, my Dartmouth mentors. While it’s very exciting to be named a Knight-Hennessy scholar, this is really just the beginning of something bigger. The hard work begins now.”

“We’re thrilled to have two alumni be part of this first cohort of Knight-Hennessy scholars,” Smolin says. “Dartmouth is among a select group of schools to have more than one scholar. I hope this inspires more of our students and alums to apply.”

Smolin encourages anyone interested in learning more about the Knight-Hennessy Scholarship and other national and international scholarship opportunities to visit the Office of Fellowship Advising.