A Class of Ice and Fire

A course on “Game of Thrones” takes on the cultural contradictions of the present. 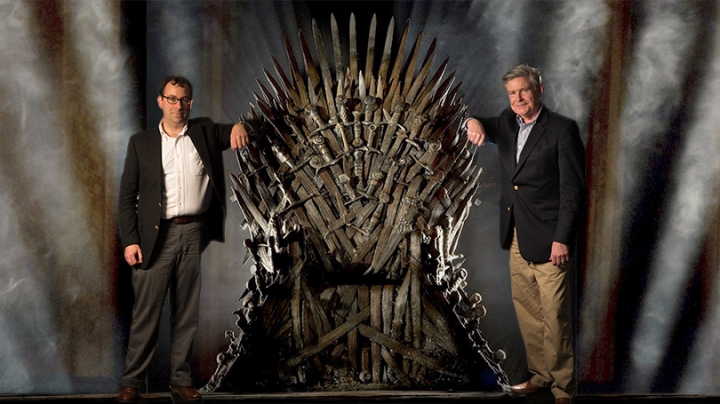 Early in season 1 of Game of Thrones—the HBO series based on George R. R. Martin’s Song of Ice and Fire books and co-created by David Benioff ’92—the old nursemaid, Nan, tells a young, convalescent Bran Stark the story of the Long Night, a generation-long winter when White Walkers pillaged kingdoms “riding their dead horses, hunting with their packs of pale spiders, big as hounds.”

The scene, Ted and Helen Geisel Third Century Professor in the Humanities Donald Pease tells his class on a recent Tuesday afternoon in Filene Auditorium, encapsulates the experience viewers have when watching Game of Thrones.

“He’s so absorbed in her story that he cannot experience the difference between what’s absorbing him as a listener in the tale she’s telling and the self that’s doing the listening,” Pease says.

“He becomes so absorbed—as we do when we binge watch Game of Thrones—that when the door suddenly opens, it’s as if an alternative reality that has completely taken us in has been disrupted.”

Pease is co-teaching the course, “Game of Thrones: Re-Imagining Medieval History as an Allegory of the Present,” with James Dobson, a lecturer in English and in the Masters of Liberal Studies program.

Dobson says the fictional world of Game of Thrones “takes the cultural contradictions of the present and works them out”—from the ethics of war to economic inequality to racism and gender constructs. “The show is giving students a way of thinking through these contradictions and ambivalences. That’s what I’m most excited about.”

That stories have power to draw listeners (or readers or viewers) into alternate realities that parallel “real” reality is, Pease tells the class, “the premise not only of Game of Thrones, but of the epic imagination that Game of Thrones continues. What Game of Thrones has done is it’s taken a genre of the collective memory called epic and rendered it so active in the 21st century that it is as if it is remembering you into its ongoing unfolding. And every time you come up with an insight and thereby remember it through yourselves, you connect with the epic vision.”

The class meets twice a week. On Thursdays, students are in charge: Groups share written responses to reading assignments and lead discussion while the professors listen. On Tuesdays, Dobson and Pease deliver lectures that tie the insights from those student discussions to literary theory, sociology, economics, gender studies, history, and more.

“If you start googling around and thinking about social networks and kinship networks in the show, there’s a ton of people who’ve done all kinds of great nerdy work on this stuff,” Dobson tells the class on a recent Tuesday, introducing students to network theory as a lens for understanding how characters relate to one another and how classes of characters—for example, noble women like Bran Stark’s mother, Catelyn Stark—serve specific functions that bind networks together.

In one Thursday discussion, students question how viewers and readers should interpret the story of Daenerys Targaryen, the exiled daughter of the deposed Mad King, whose narrative arc “draws on the white savior figure in white imperialist racist fantasies.”

In his lecture the following Tuesday, Pease tells the class about Justa Grata Honoria, sister of Western Roman Emperor Valentinian III, whose overtures to Attila the Hun provided an excuse for his invasion of northern Italy in the fifth century—a historical precedent Martin likely used as source material for Daenerys and her marriage to the nomadic Dothraki raider Khal Drogo.

Pease asks the class, “When I introduce that historical reality as one of the bases for the Daenerys/Drogo story, have I in fact produced a way of justifying George R.R. Martin’s utilization of the narration? Or have I suppressed—by way of saying, that’s the reality he simply rehearsed—the variation that the Drogo/Daenerys narration has produced, in order to keep the story going?”

Like many of the students, biological chemistry major Habacuc Delgado ’19 signed up for the course because he had seen the HBO series. He says he’s been excited to learn about the historical inspirations of the story, from the War of the Roses to the invasions of Attila the Hun. “There’s a connection between the fantasy and reality, and our time and what has happened before,” he says.

Jacob Meister ’20 is a fan of both the books and the show. “I’m really impressed with the ways that the show functions as an intersection between all of these theoretically separate lines of study, like history, English literature, storytelling, film studies,” he says.

Emily Schneider ’19, a biology major and public policy minor, appreciates that the course allows her to talk about “more complex things in the show, rather than just, oh my God, who died?”

For example, she says, “Today’s discussion was all about a Marxist interpretation of Game of Thrones, which was something that none of us had thought about before. Talking about social movements in this fictional world was really interesting.”

What does it mean to students that one of the series showrunners is a Dartmouth graduate? Meister, a double-major in English and history, says Benioff’s example is inspiring him to consider a career in the arts.

“When you see somebody with the ability to find something they love and create something awesome that other people love out of it, it makes it hard to justify not committing to some kind of passion that you have, even at some basic level, and seeing where it can go,” he says.

Pease and Dobson’s Game of Thrones class is not the only Dartmouth course organized around a pop culture phenomenon. Among recent offerings, Associate Professor of Government Michelle Clarke is using Game of Thrones to teach Machiavelli this winter. And this past fall, Assistant Professor of English Brett Gamboa, a Shakespeare specialist, taught a course focused on another HBO series, David Simon’s acclaimed The Wire.