A chemist and an economist each receive $65,000 in funding to support their research. 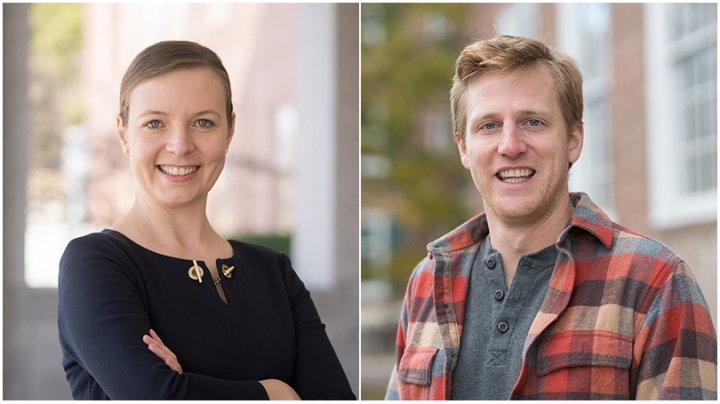 Assistant Professor of Chemistry Katherine Mirica and Treb Allen, the Distinguished Associate Professor of Economics and Globalization, and  have each won 2018 Alfred P. Sloan Research Fellowships, two of the 126 two-year, $65,000 fellowships awarded this year.

“I’m so pleased to see two of Dartmouth’s newest teacher-scholars recognized with the prestigious Sloan Fellowship.  It’s a testimony to the outstanding quality of our faculty and their potential for impact on the world,” says Interim Provost David Kotz ’86.

The fellowships are awarded yearly to researchers “in recognition of distinguished performance and a unique potential to make substantial contributions to their field,” according to the Alfred P. Sloan Foundation. They “seek to stimulate fundamental research by early-career scientists and scholars of outstanding promise.”

Mirica received the Sloan Fellowship in Chemistry. “Sloan Research Fellowships are very prestigious and we are thrilled that Katherine is a recipient,” says Dean Wilcox, professor of chemistry and chair of the Department of Chemistry. “This award recognizes her record, trajectory, and potential for success in her scientific and academic career. It will also bring new recognition and visibility to the chemistry department.”

Mirica says she is deeply honored and grateful for her selection as a recipient of the fellowship. “This award recognizes my group’s achievements in the development of materials for the next generation of chemical sensors, and will enable us to pursue fundamental investigations of the structure-property relationships of these materials.”

Mirica works with the design and synthesis of materials that can sense and capture gases. Some of these gases are toxic, and their containment can safeguard humans and the environment. Her lab also investigates materials with adhesive properties that can have useful applications in the manufacture of microelectronics.

Allen was awarded the fellowship in economics. “Treb is one of the best economists of his generation. Dartmouth competed hard to recruit him for the Globalization Cluster,” says Christopher Snyder, the Joel Z. and Susan Hyatt Professor of Economics and chair of the Department of Economics. The cluster is one of 10 interdisciplinary groups being created as part of the academic initiative of President Phil Hanlon ’77 to extend Dartmouth’s impact on important and complex global challenges.

“His winning the Sloan Fellowship, which in economics is only given to a select set of the best young stars each year, alerts everybody else to what we know quite well here at Dartmouth,” Snyder says.

Allen says, “Dartmouth has one of the elite groups of international economists in the world, and I look forward to using the award to support the group’s many activities, including giving students opportunities to work on cutting-edge research.”

Allen’s research examines how geography shapes the interactions between people. He applies theoretical models using detailed spatial data to answer pressing policy questions, including the economic effects of a border wall between the U.S. and Mexico.

“The Sloan Research Fellowships are extraordinarily competitive awards involving nominations for most of the very best scientists of your generation from the United States and Canada,” Sloan Foundation President Adam Falk wrote in announcing the recipients. “I hope your selection from this remarkable group of nominees will give you particular personal satisfaction and convey a clear indication of the high esteem in which your past work and future potential are held by your fellow scholars.”