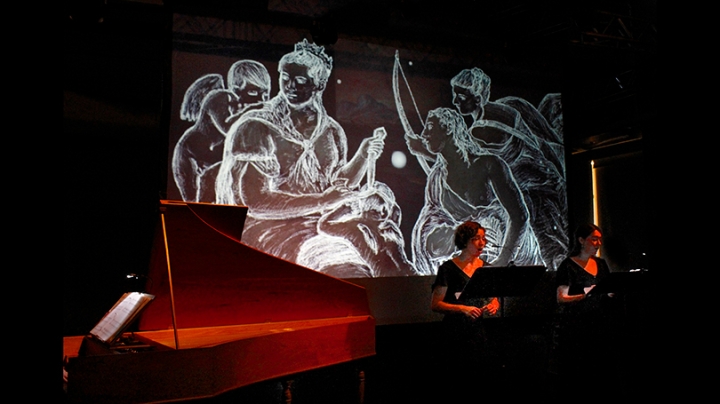 On Friday, the Dartmouth Glee Club performs Giacomo Carissimi’s Jepthe, a 17th-century oratorio. But it won’t be a typical classical music concert. Pictures, as well as voices, will tell the Biblical story of a tragic hero who sacrifices his daughter to God in exchange for a military victory. The singers will perform in front of projected images, including photographs of the Italian cathedral where the work was first performed, English translations of the lyrics, and animations.

“The visual projections will not compete with the sound; they’re meant to deepen the audience’s engagement,” says their designer, Camilla Tassi, a vocalist, computer scientist, and master’s candidate in Dartmouth’s Digital Musics Program.

Born in Florence, Italy, Tassi moved with her family to Florida in 2005. She earned a BA in music and a BS in computer science from the University of Notre Dame. Dartmouth, Tassi says, offers the only master’s degree she knows of that combines her two interests in one program.

“It’s been the answer to everything for me,” Tassi said before a recent rehearsal. “The flexibility the Digital Musics Program allows is incredible.” Graduate students in the program produce original work synthesizing two or more of these areas of concentration: contemporary music composition and performance; musical instrument design and fabrication; film and animation; electronics; computing; psychology; neuroscience; and health and medicine.

Since coming to Dartmouth about a year ago, Tassi has produced a shortened version of Jepthe in the Hop Garage (which inspired Glee Club conductor Louis Burkot to mount the current full-length production), was a soloist in the Glee Club’s November concert, Mendelssohn’s Elijah, and operated the lightboard for the theater department’s mainstage musical, Cabaret. She has designed visual projections for the Longy School of Music in Cambridge, Mass. Currently, she is designing staging for Apollo’s Fire, a professional period-instrument ensemble that has performed at Dartmouth.

Tassi is breaking new ground in pairing 21st-century technology with Renaissance and baroque music, says Michael Casey, the James Wright Professor of Music, a professor of computer science, and the director of the Graduate Program in Digital Musics.

“She has a vision: that in order to bring those older works to younger audiences, she can accompany them with modern visual storytelling techniques, visual digital projection, and lighting design. That’s what we’ve brought her here to do,” says Casey.

“The issue I have with the way early music is usually presented,” says Tassi, “is that it’s very strict, done on period instruments in a certain tuning. That can be a good way to approach the repertoire, but it misses some layers of meaning. As I tell people about Bach, we are not all Lutherans, or Germans. We don’t all speak that language.”

What we now consider classical music was often, in its own time, experimental, she says. “Composers write for spaces. They write for acoustics, for an aesthetic look. But when we put the Bach Passion in a concert hall with everybody dressed in black, very formally, we could be losing some connection to the space.” For the Carissimi oratorio, the audience may choose to sit onstage. Tassi will sing the daughter’s role.

She’s bringing multiple talents to her undergraduate arts classes, as well. For “Music, Design, and Creativity,” a new theater course being taught this term by set designer and Assistant Professor Michael Ganio, she’s been demonstrating basic music concepts to help students create visual art to accompany sound. “Most set design classes are based on scripts,” says Ganio. “This course asks, what does music look like?”

“The usual model of an arts program is that you come and study with masters and you learn to do it the way they do it. We take a different approach,” says Casey. “We look for people who have both ability and vision, who show great promise and originality, and we create an environment that helps them to grow.”

Jepthe will be performed in Spaulding Auditorium at the Hopkins Center for the Arts at 6:30 and 9 p.m. on Friday, Feb. 16.