It is the first issue in the magazine’s 95-year history devoted to one photographer. 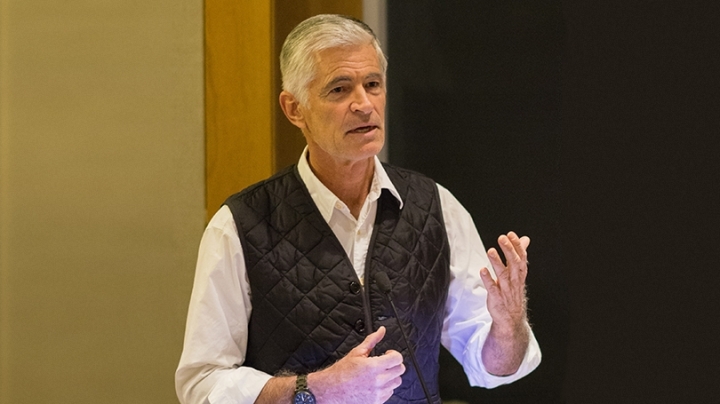 Photojournalist James Nachtwey ’70, whose life’s work of recording the face of war and human conflict is archived at Dartmouth’s Hood Museum, has just completed “The Opioid Diaries,” published in a special edition of TIME magazine dedicated entirely to his photography.

TIME commissioned Nachtwey to document the U.S. opioid crisis, an addiction epidemic that kills nearly 64,000 people in America every year. In the introduction, the editors say that they turned to Nachtwey to take the story beyond statistics and to document the crisis through the people living it.

“The result is ‘The Opioid Diaries,’ the first issue in our 95-year history devoted entirely to one photographer’s work. This is a visual record of a national emergency—and it demands our urgent attention,” the editors write in the introduction.

In Nachtwey’s notes in the Feb. 22 issue of the magazine, he says he cannot comprehend statistics like the fact that there have been almost as many deaths from opioid overdoses as in all of America’s recent wars combined.

“The only way to make real sense of it, I told my editors, was to see what happens to individual human beings, one by one,” Nachtwey writes.

Nachtwey traveled across the country with TIME deputy director of photography Paul Moakley, gathering stories from users, families, first responders, and others touched by the crisis. Nachtwey’s images are paired with Moakley’s interviews, short videos, and firsthand accounts from people at the heart of the crisis. The online version mixes dynamic text and sound, and the project includes a guide to finding help for those struggling with addiction.

The images are harsh, raw, and troubling. Some examples: a user photographed when she was six months pregnant just before she prematurely gave birth; first responders unsuccessfully trying to revive a 29-year-old man, lying shirtless on the floor, who died from a fentanyl overdose.

John Stomberg, the Virginia Rice Kelsey 1961s Director of the Hood Museum of Art, says that Nachtwey has long worked to overcome the “othering” of subjects that often marks photojournalism.

“With his ‘Opioid Diaries’ project, he goes a step further and turns the camera on ‘us,’ ” Stomberg says. “As his text makes clear, this story is about an ‘us’ that includes every reader along with the photographer. We—reader, photographer, and subjects—are all in this together. None of us is immune. Nachtwey has crossed an invisible line with this set of images, refusing his viewers the comfort of detachment.”

Nachtwey describes his approach to his work in his notes.

“To witness people suffering is difficult. To make a photograph of that suffering is even harder. The challenge is to remain open to very powerful emotions and, rather than shutting down, channel them into the images. It is crucial to see with a sense of compassion and to comprehend that just because people are suffering does not mean they lack dignity,” Nachtwey writes.

The photographs from the project will eventually be added to the Nachtwey archive at the Hood. Dartmouth named Nachtwey a provostial fellow in September 2016 and announced that the Hood had acquired his entire body of work—more than 500,000 images—encompassing every photograph taken over the course of his career (including numerous unpublished photographs and negatives), along with all future photographs taken to the end of his working life.

Work has begun, in cooperation with Nachtwey, on cataloging and indexing the archive, says Katherine Hart, the Barbara C. & Harvey P. Hood 1918 Curator of Academic Programming and senior curator for Nachtwey’s archive.

As provostial fellow, Nachtwey plans to maintain his longtime connection to teaching at Dartmouth through lectures, class visits, and special exhibits, Hart says. The museum is planning to develop a major exhibition of Nachtwey’s work after the museum renovations are completed in winter 2019, she says.

James Nachtwey will be speaking about “The Opioid Diaries” with some of the people featured in the TIME project at 6:30 p.m. on March 6 at the Newseum in Washington, D.C. The event is open to the public.