“He was one of the most charismatic individuals I’ve ever met,” says Balmer. 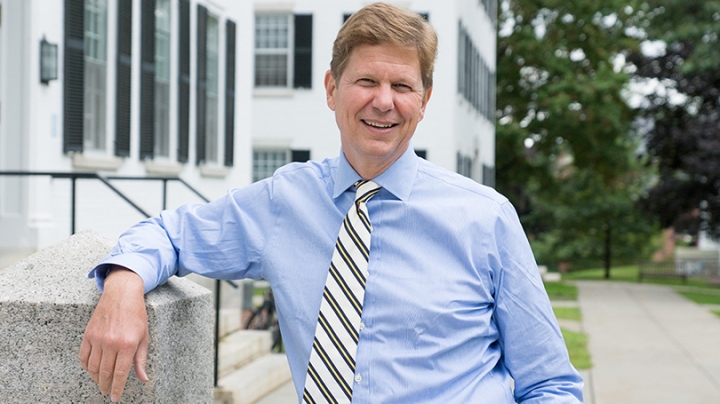 Randall Balmer, the John Phillips Professor in Religion—author of Evangelicalism in America, Redeemer: The Life of Jimmy Carter and God in the White House and producer of the PBS documentary Crusade: The Life of Billy Graham—reflects on the legacy of the Christian evangelist and pastor to U.S. presidents, who died Wednesday at his North Carolina home after battling several illnesses in recent years. He was 99.

You have said that Billy Graham brought evangelicalism out of the shadows. What do you mean?

The early part of the 20th century was not a happy time for America’s evangelicals, with the holdover of Darwinism and the 1925 Scopes trial, and they really receded from public consciousness. Billy Graham comes along in 1950, and he begins to engage the larger society.

You draw a distinction between the fundamentalism he grew up with and the evangelicalism he espoused. Can you explain the difference?

At a very early stage in his career, Graham made a conscious decision to reject the narrow, constricted militant fundamentalism of his childhood in favor of a broader, more capacious evangelicalism. Part of the key to Billy Graham’s genius was that he jumped on various media technologies which were then emerging. He and his team, as he called his people, exploited them brilliantly, turning him into a religious celebrity: one of the most important, if not the most important of the 20th century.

And what was his message to those millions who followed him?

The message was simply that if you give your life to Jesus, if you convert, if you are born again, from the third chapter of Saint John in the New Testament, then you are going to heaven. And he believed that with all his heart. Now, that approach is certainly open to criticism. I think it can become formulaic. But I have to say that I have met many people over the course of my career, in particular working on the documentary, whose lives were utterly changed by their encounter with Billy Graham and his preaching.

He formed close relationships with several U.S. leaders—particularly George W. Bush. Why was he so sought after as a counselor and sounding board by presidents?

He started making overtures to Harry Truman in 1952, but that encounter did not go well. Truman thought that Graham was a bit of a showman, and he was, at that time. He was young. Early in his career he was pretty flashy. So Truman didn’t care for him too much. But Graham forged other friendships in the White House, from Eisenhower all the way through to Barack Obama. He was always drawn to power and he was always drawn to political figures—not so much to politics, but political figures. As for the presidents, that was an easy calculus, because Graham had such a following. He was one of the most charismatic individuals I’ve ever met.

During his life, the religious right emerged as a political force. How did he feel about that?

Graham was profoundly uneasy about the religious right. He made a comment in 1981: “It would disturb me if there was a wedding between the religious fundamentalists and the political right. The hard right has no interest in religion except to manipulate it.” That is probably the most prescient statement that Graham ever made over the course of his career. At the same time, I think you have to acknowledge that Graham tilted toward the right politically. He was a political conservative, and certainly his real engagements tended to be Republican presidents, beginning, of course, with Eisenhower, but especially with Nixon, the Bushes, and Reagan to a lesser extent. All of them were important friends to him.

How should he be remembered?

I think what Graham did was bring evangelicalism back into the mainstream—certainly in American life and arguably around the world, in part because he was such a peripatetic presence. But I think the other thing that’s remarkable about his life and his career, especially for those of us who remember the televangelist scandals of the 1980s, is that here is a man who spent more than half a century in the public eye. And no one has credibly challenged his integrity. I’m willing to challenge his judgment—certainly his political judgment, when it comes to people like Richard Nixon. But nobody has challenged his integrity. And I think that’s remarkable.