Students Get an Inside View of U.S. Military Command Centers 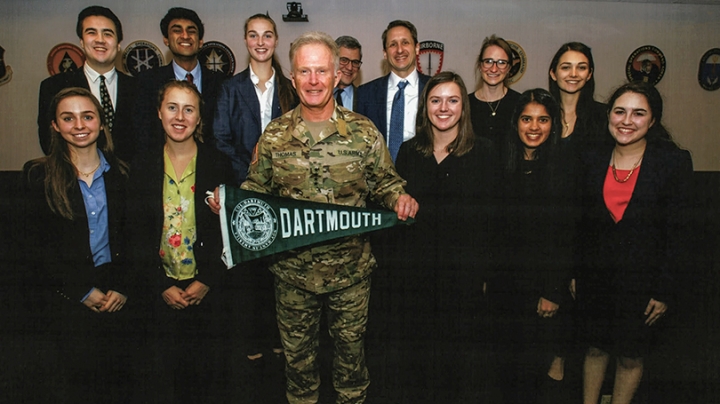 Meeting Votel, who oversees U.S. troops in Afghanistan, Iraq, and the Mideast, and Thomas, who oversees U.S. military special operations around the globe, was an extraordinary opportunity for Dartmouth students, says Daniel Benjamin, the Norman E. McCulloch Jr. Director of the John Sloan Dickey Center for International Understanding. The trip was funded through a special gift from the Class of 1978 through its National Defense and Security Initiative.

“One of the most interesting things about the trip was how it gave the students an opportunity to experience the military up close, and, as you would expect, some were skeptical going in,” Benjamin says. “They asked some good, tough questions about issues like foreign occupation, the dominance of the military in U.S. national security, and the like.”

The War and Peace Fellows are participants in a yearlong co-curricular program that brings together students from all disciplines to engage in an ongoing discussion of the social, political, moral, and technological dimensions of international conflict and cooperation.

Benjamin, who knew Votel from his time as coordinator for counterterrorism at the State Department, and Associate Professor of Government Benjamin Valentino, coordinator of the Dickey Center’s War and Peace Fellows, traveled with 10 undergraduates to CENTCOM and SOCOM headquarters, located at the MacDill Air Force Base in Tampa.

Sarah Atac ’18, a double major in government and engineering, says Votel was nothing like the stereotypical four-star general she had in mind.

“He’s so impressive, but not at all what I expected,” Atac says. “While he did command attention, he was very thoughtful. He was quiet. He was clearly a wonderful listener and a great communicator, but not in the way you would expect from the combat commander of all of our wars.”

At the roundtable meeting with Votel were military attachés from nearly 20 allied countries, as well as political affairs advisers from USAID and the State Department. Later, the group visited Special Operations Command in another building on the base, meeting with Thomas for about an hour. SOCOM intelligence officers also spoke with Dartmouth students in a high-tech war games room and special operations command center.

“You know in the movies when there is a big room filled with rows and rows of computers and huge screens at the far end, with all the generals sitting there talking with people in different places around the world? We saw a real version of that,” Atac says. “That, I will definitively say, was cool.”

“We heard as much from the people we met with down there who said, you guys should really understand how unusual it is for the commanders of CENTCOM and SOCOM to meet with anybody for an hour, let alone a group of undergrads who are just trying to understand their nation’s military,” Valentino says.

Benjamin says the aim of the War and Peace Fellows program is to give students access to internationally known experts and high-level policy makers in the Congress, Pentagon, and State Department to engage in discussions and to learn about the career paths of leaders in a range of public service and policy jobs. The trip to CENTCOM and SOCOM accomplished those goals, he says.

“One of the major benefits of the trip was that students who haven’t had any real exposure to the U.S. military got an intensive introduction—one that demonstrated how thoughtful and professional men and women in uniform are,” Benjamin says.

Bill Platt can be reached at William.C.Platt@dartmouth.edu.