The documentary is enjoying success on the indie film circuit. 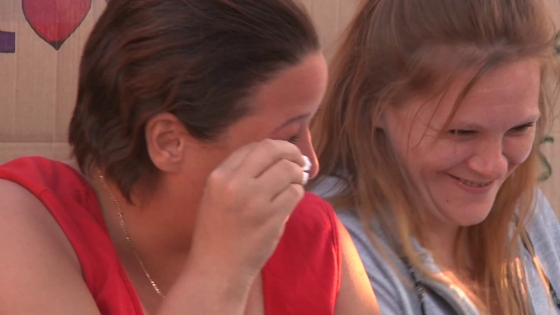 It’s Criminal, a film about a theatrical collaboration between Dartmouth students and incarcerated women, is based on an experiential learning course at the College.
2/19/2018

It’s Criminal, a documentary about a group of Dartmouth students teaming up with incarcerated women to create theater in a New Hampshire prison, has been making the rounds of independent film festivals. Next stop: the Athena Film Festival at Barnard College, where it will have its New York City premiere.

The film grew from a course, “Telling Stories for Social Change,” co-taught each fall by Ivy Schweitzer, a professor of English, and Pati Hernandez, a lecturer, who, like Schweitzer, teaches in the Women’s, Gender, and Sexuality Studies Program.

Schweitzer traces the roots of her activism to a talk, “Is Prison Obsolete?” given at Dartmouth in the late 1990s by social justice advocate Angela Davis.

“Davis said, ‘Every academic in this room, every scholar, should be thinking about this. You should be teaching about it,’” Schweitzer recalls. “I didn’t know anything about prisons. I didn’t know anyone in prison. But I was persuaded by her, and I thought, I am going to do this.”

Schweitzer found a close collaborator in Hernandez, who at that time was a member of the Bread and Puppet Theater troupe based in Glover, Vt. Schweitzer and Hernandez began hosting noncredit field trips to local prisons, introducing Dartmouth students to women serving time for a range of offenses, often related to drug and alcohol use. By 2006, with funding from a variety of sources, they had built a credit course around the experiential learning project. It culminates each term with skits incorporating writing, music, and dance, jointly performed by students and inmates.

In the film, the two groups are initially wary of each other, but over 10 weeks, the students and inmates draw closer together. Slowly building mutual trust, they share personal experiences, giving rise to thought-provoking scenes.

“All four women featured in our film, who were incarcerated, came from abusive situations of despair and hopelessness,” says Schweitzer.

Hernandez helps the women open up about their pain with students who had rarely experienced anything like it. “Arts are put to the service of a situation,” says Hernandez, who can be seen in the film keeping the play rehearsals going when tempers flare and tears erupt.

Signe Taylor, the Vermont-based filmmaker who directed It’s Criminal, began as the videographer for the end-of-term skits. One day, she came face-to-face with a stark reality.

“It was at the women’s prison in Windsor, Vt., and one woman in the play, who was about my age—she had a stylish haircut, and was wearing black, like me—stood up and said, ‘I was an experimental filmmaker, and I went to film school, and then a lot of things went wrong.’ I realized that she and I had been on very similar paths in life, yet she ended up in a very different place.”

When she got to her car, a shaken Taylor started crying. Later, she, Schweitzer, Hernandez, the students, the inmates, and a film crew got to work making It’s Criminal.

“We’re hoping the film raises consciousness in the general population about the fact that it’s their attitudes towards incarcerated people that shape the policies that our governments pursue,” says Schweitzer. “Why make an addict into a criminal? Why not see the addict as someone who is ill and needs help?”

Schweitzer and Hernandez are writing a manual for courses similar to “Telling Stories for Social Change.” Members of the film team also testified before a Congressional committee in favor of the Dignity for Incarcerated Women Act, a bill that strengthens family ties and supports rehabilitation for women, the fastest growing segment of America’s prison population.

It’s Criminal will be screened at Barnard’s Athena festival at 3 p.m. on Feb. 24. Women Alumni of Dartmouth New York are planning to attend as a group. Future screenings will be held at various locations in Vermont, New Hampshire, Massachusetts, and New Jersey, and on public television.