The undergraduate, who is visually impaired, will ski with her guide in four events.

Missing the Olympics? They’re not over yet. On March 9, 74 athletes paraded into the stadium in Pyeongchang, South Korea, for the opening ceremony of the 2018 Paralympics. Over four days next week, Team USA Alpine skier Staci Mannella ’18 will compete in four women’s events: super-G, super combined, slalom, and giant slalom.

Mannella races in the visually impaired category because she was born with achromatopsia, which limits her visual acuity to three feet and causes extreme sensitivity to light. She’s preceded down the slope by a sighted guide, her good friend Sadie DeBaun, who stays about 10 feet in front of her. Wearing helmets equipped with Bluetooth headsets allowing them to communicate, the pair won bronze in super combined in Mannella’s world championship debut in 2017. 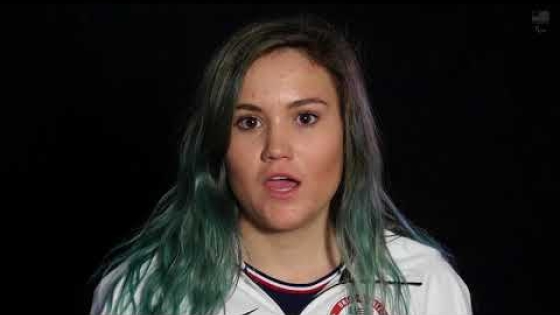 In her second Olympics—she placed sixth in the slalom and giant slalom in Sochi in 2014 with her former guide, Kim Seevers—Mannella is setting a high bar, even though, in December, she partially tore the medial collateral ligament in her left knee.

“We are back stronger than before,” she tweeted a month ago. Two weeks ago, from a training camp in Aspen, Colo., she told USA Today, “The goal is to podium. I really want to walk away feeling like we skied our best, like the skiing was really good and strong, that we skied to our potential. I think a podium is realistic. Obviously, we’re shooting for gold. I don’t think anyone leaves the start thinking, ‘Huh, I don’t want to win today.’ ”

Mannella and DeBaun, the youngest members of the U.S. Alpine Paralympic ski team, face a veteran competitor who is also their mutual friend and mentor, Danelle Umstead. Guided by her husband, Umstead has racked up three medals at previous Paralympics. “We have a really unique relationship because she’s the person I look up to most,” Mannella tells Team USA. In fact, it was Umstead who paired Mannella with DeBaun.

“If I get a medal,” says Mannella, “Sadie and I will both be on the podium, because we will both be winners. Sadie is as committed to my goals as I am.”

Another Dartmouth alumna, Kristina Trygstad-Saari ’07, is a guide to Team USA’s Mia Zutter, a visually impaired Paralympian who competes in cross-country and biathlon. At Dartmouth, Trygstad-Saari was a member of the women’s Nordic team and was recognized for her team leadership in 2006 with the Spirit of Skiing Award.

Fans can follow the 2018 U.S. Paralympic Team at Team USA’s site and on Facebook, Twitter and Instagram. Coverage of all six Paralympics sports—Alpine skiing, snowboarding, sled hockey, wheelchair curling, cross-country skiing, and biathlon— will be available at NBCSports.com, NBCSN, and the Olympic Channel.