The award aids historian’s study of Catholic-Protestant reconciliation in the 20th century. 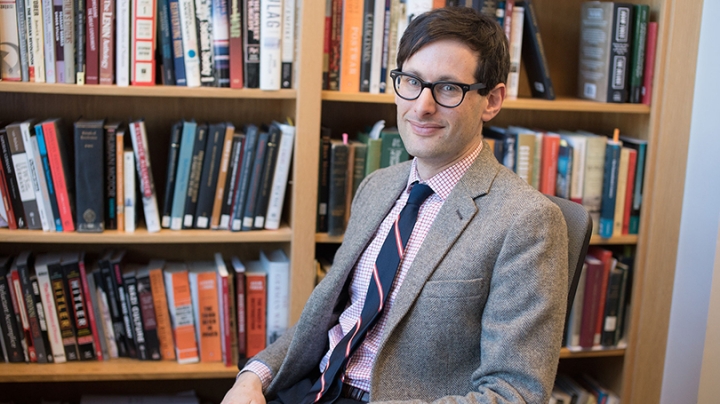 “My intellectual project as a whole is interested in how ideas and ideologies intersect with politics and institutions,” says historian Udi Greenberg. (Photo by Eli Burakian ’00)
3/29/2018
Body

Searching for the causes of a sudden end to the discord between Catholics and Protestants in the first half of the 20th century led Associate Professor of History Udi Greenberg on a two-year exploration of archives, private papers, and institutional records of church leaders, missionaries, and politicians around the world.

Now, as a recipient of the Frederick Burkhardt Residential Fellowship for Recently Tenured Scholars, Greenberg will have support in completing a new book telling the story of this dramatic transformation in European thought and politics. The project is titled “Religious Pluralism in the Age of Violence: Catholics and Protestants in Twentieth-Century Europe.”

Greenberg has chosen the Berkeley Center for the Study of Religion at the University of California, Berkeley, for his residence during the 2019-2020 academic year, where he will transition from research to writing.

Greenberg found that the formation of powerful pan-Christian parties and organizations after World War II—emerging in postwar Europe in the wake of the rise of Nazism, the unfolding of the Cold War, and the process of European decolonization—simultaneously expanded tolerance among Christian communities while it continued to marginalize other groups.

“My intellectual project as a whole is interested in how ideas and ideologies intersect with politics and institutions,” he says. “I’m interested in how Europeans thought about themselves and about the world, and how that informed how they interacted with others.”

Robert Bonner, chair of the Department of History and the Kathe Tappe Vernon Professor in Biography, says the Burkhardt fellowship will allow Greenberg to advance cutting-edge work on religious pluralism in Europe.

“This is the sort of funding that will accelerate the publication of what will be a truly important work of history, with clear relevance for our own moment,” Bonner says.

The Burkhardt fellowships provide a $95,000 stipend and a $7,500 research budget to each of up to 22 scholars per year in support of yearlong residencies at institutions whose resources and scholarly communities are ideally suited to the proposed research projects.

“Securing the highly competitive Burkhardt puts him in very good company,” Bonner says. “Our department is especially proud that he joins Naaborko Sackeyfio-Lenoch, another recently tenured Dartmouth historian, who was among last year’s winners.”

Greenberg received tenure in 2015 following publication of The Weimar Century: German Émigrés and the Ideological Foundations of the Cold War. The book, which traces the intellectual, institutional, and political journey of five influential political theorists from their education in Weimar Germany to their participation in the formation of the Cold War, was awarded the 2016 Council of European Studies’ Book Prize for best first book in European studies.

The Weimar Century and his current project explore the process by which people and institutions change perspectives, Greenberg says.

Greenberg has also been recognized for his teaching on modern European history. He was elected by the Class of 2016 as Dartmouth’s best professor, and was awarded the Jerome Goldstein Award, the College’s top teaching prize.

In Greenberg’s view, teaching is an essential element of scholarly work.

“I want students—by looking at how people from different cultures and different periods thought about the world, understood the world—to recognize that our thoughts are always informed by certain experiences and certain ideologies,” he says.

“By seeing those processes happening in other societies, hopefully it allows us to think about our own society in ways that are more humane or tolerant, and to understand that if other people think differently from us, that’s not because they are stupid or ill-informed. Instead, it is because certain experiences led them there.”

The Burkhardt fellowships are sponsored by the American Council of Learned Societies, ACLS, with support from the Andrew W. Mellon Foundation. The ACLS, a private, nonprofit federation of 74 national scholarly organizations, is the preeminent representative of American scholarship in the humanities and related social sciences.