The disciplines will share a $155 million facility proposed to be built on the west end. 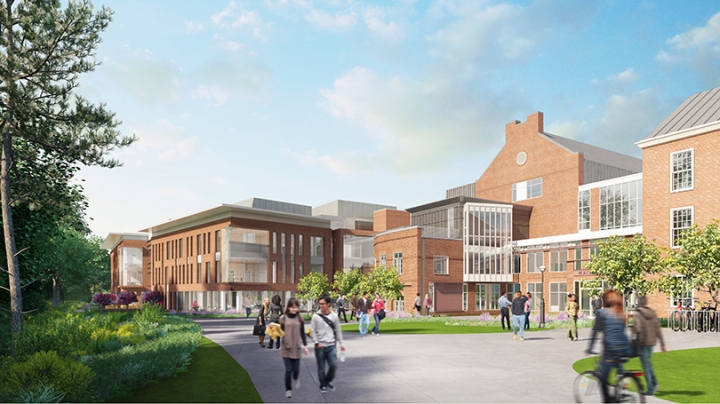 The proposed west end building, shown at left in this architectural drawing, will be linked to Thayer’s MacLean Engineering Sciences Center and Cummings Hall. (Photo courtesy of Wilson Architects)
3/28/2018
Body

The planned expansion of Thayer School of Engineering and the Department of Computer Science will integrate innovation and experiential learning as computer science and the Dartmouth Entrepreneurial Network (DEN) move to the west end of campus to share a proposed new building with engineering.

The $155 million facility will be a hub for innovation, says President Phil Hanlon ’77.

“Engineering and computer science have a natural synergy that will spark collaboration and innovation through their overlapping work in robotics, imaging, protein engineering, and other areas of technological advancement,” President Hanlon says. “In addition, locating Dartmouth’s entrepreneurial enterprise in the west end will speed the translation of ideas into real-world applications.”

The project is currently in the design phase, with early site work to support construction planned for later this year. The College must first gain town approval for the facility and will need several permits before work begins.

Construction is expected to start early next year on a three-level underground parking and loading facility, which will sit below the four-floor education portion of the building. Work on the above-ground portion of the building, which will be linked to the MacLean Engineering Sciences Center and Cummings Hall, is planned to begin in late 2019 and run through mid-2021, under the current timetable. The building will be funded entirely by gifts to Dartmouth.

“This is the time for engineering and computer science to dissolve the artificial boundary between the computational and the physical worlds. It really is, in the words of the National Academies, giving rise to the fourth industrial revolution,” says Thayer Dean Joseph Helble.

“We are excited to be capitalizing on this moment in time, when technology has become extremely important to the education, careers, and lives of our students. Enrollment is soaring in engineering and in computer science, and we want to be able to offer every Dartmouth student, as part of their integrated liberal arts education, the chance to take courses in hands-on engineering, design, and in the fundamentals of computer science.”

Dean of the Faculty Elizabeth Smith says the “unification and expansion of computer science and engineering will allow us to address some of the most interesting and pressing problems of the next generation that lie at the intersection of the digital and the physical.”

‘Time to Grow Is Now’

Currently, more than 70 percent of Dartmouth undergraduates enroll in at least one engineering or computer science course, Helble says. And there are waiting lists to get into many engineering courses.

“We are bursting at the seams,” he says. “Our time to grow is now.”

In 2016, Dartmouth made history nationally as 52 percent of the undergraduate engineering degrees awarded at commencement went to women, making it the first comprehensive national research university to award more bachelor’s degrees in engineering to women than men. The national average at the time was 19 percent.

“The field of computer science has been growing in popularity with our majors and enrollments more than quadrupling in the last five years,” Computer Science Chair Hany Farid says. “There is an incredible amount of excitement in how the power of technology can be harnessed and used in an ever-increasing number of exciting and diverse ways.”

“The presence of entrepreneurship alongside engineering and computer science will encourage more students and faculty to translate their ideas into technologies that have real-world impact,” says David Kotz, interim provost and professor of computer science.

Currently, one-third of Thayer’s tenure track faculty are entrepreneurs, making Thayer one of the most entrepreneurial schools of engineering in the country. Helble would like to increase that ratio to one in two, and he says the opportunity for discovery will grow through an expanded faculty.

“This will make us, hands down, the first in the country per capita for engineering faculty entrepreneurs,” Helble says. “And our opportunity for national leadership is enhanced by pairing engineering with computer science and entrepreneurship.”

The move to the west end will free up faculty office space and classrooms in Sudikoff Hall, where computer sciences is located, and also space in the DEN’s current location, in the 4 Currier building.

The expansion will also provide a new home for the Dartmouth Electron Microscope analytical facility, which is being moved from the north end of campus. Moving the facility, currently located in the basement of Remsen Hall, will provide the electron microscope center with a purpose-built, state-of-the-art space near the laboratories of many of the engineers and computer scientists who work on imaging and advanced materials that often require micro- and nanoscale visualization.

The west end expansion will, over time, double the size of the Thayer faculty to a projected total of 70 tenure-track professors, and computer science will increase its faculty by 50 percent. The new building will create space and teaching capacity to offer engineering and computer science courses to all interested Dartmouth students; support the growing number of majors in both areas (engineering has doubled over the past decade) and double the square-footage available to the programs.

The integration of engineering, computer science, and entrepreneurial innovation will allow for easy collaboration, as faculty and students share an open space designed to encourage informal conversation and meetings. The new building will feature a two-level central atrium connected to many student design spaces, making project work and studios visible to passersby.

Locating engineering and computer science in the new facility without regard to disciplinary boundaries is meant to provide students with learning and project opportunities that draw upon both coding and physical-device expertise, say Farid and Helble.

“We have the opportunity here, now, for Dartmouth to prepare students for engaging in and asking questions about a world of connected devices by bringing engineering and computer science and entrepreneurship together programmatically in ways that are exceptionally collaborative,” Helble says.

Says Farid, “Computer science and engineering have collided, and digital technology is being integrated into everything from our toasters to self-driving cars. To address the greatest challenges ahead of us, our students must be exposed to and be trained in the integration of these two worlds.”

Making way for the west end expansion will mean a change in parking and traffic flow. The expansion is ultimately slated to more than double the amount of parking on that end of campus. In the short term, however, parking spaces will be lost with the closure of the Cummings lot—where the new building will be located. College planners are evaluating options for temporary parking space to use during construction. 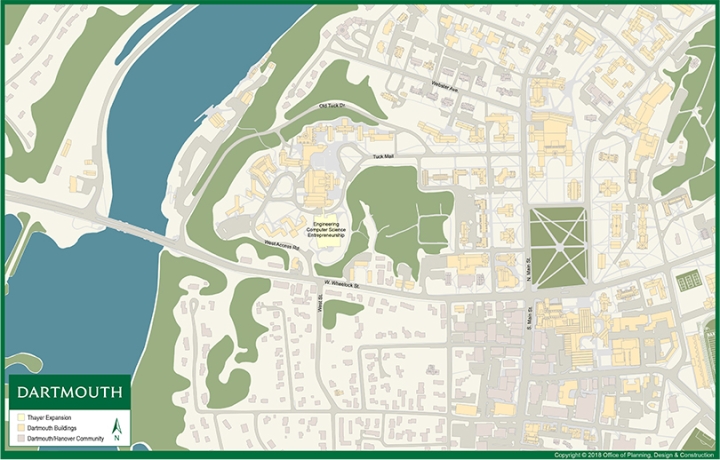 Another change will be the removal of Engineering Drive, which runs from West Wheelock Street to the Cummings lot. A new roadway, called West Access Road, will be constructed to provide access to the parking garage and Thayer loading facility as well as limited access to the West End Circle. A now-closed portion of Old Tuck Drive, which originates just above the swim docks and the Ledyard parking lot, will be reopened and will connect the roadway to Tuck Mall, pending town approval.

“With these changes, we are committed to improving the safety of pedestrians, cyclists, and drivers on West Wheelock Street,” says John Scherding, vice president for planning, design, and construction. “We will also consider other safety measures in the area, working in conjunction with the town of Hanover.”