“Seeing what other teams do improves our own strategies,” says Zoe Schwartzman ’21. 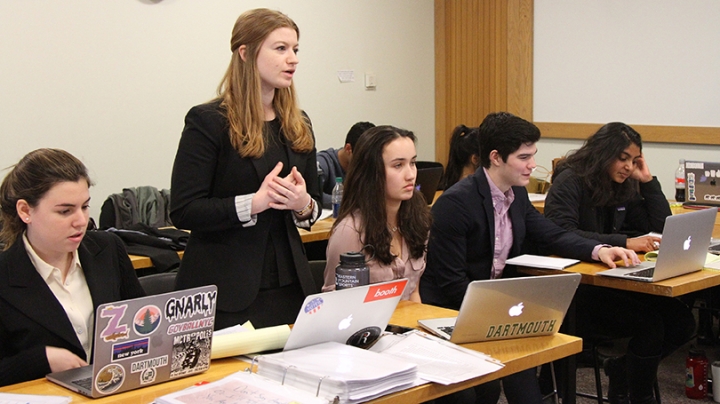 In the imaginary town of Midlands, an airline pilot is nearly strangled by a person who is perhaps acting on behalf of the pilot’s spouse, with whom the alleged attacker is having an affair. The pilot recovers, and the assailant faces trial for attempted murder.

No. It’s a fictional criminal case at the heart of the 2018 litigation competitions sponsored by the American Mock Trial Association (AMTA). On Feb. 24 and 25, 20 members of Dartmouth’s student-run mock trial society competed against other schools in a regional tournament at Boston College. While Dartmouth’s role-play litigators did not advance to the next round, four participants—Nicole Beckman ’20, Mary Joy ’21, Kayla Rivera-Hoskinson ’20, and Emily Minsky ’21—scored well individually.

The week before the competition, for a rehearsal at the Nelson A. Rockefeller Center for Public Policy, mock trial society members donned dark suits as attorneys, or dressed more colorfully as witnesses, as two teams staged two different versions of State of Midlands v. Dylan Hendricks.

As defendant Hendricks, the alleged perpetrator/food cart peddler, Alex Brown ’19 proclaimed his innocence in a southern drawl worthy of Forrest Gump. His interrogator, Pooja Singhi ’18, barely kept a straight face. Mock trials can be a lot of fun.

They also demand smooth, extemporaneous delivery, long attention spans, and meticulous research. “We spend months reading through the packet of documents AMTA sends us,” says Henry Tracey ’19, Dartmouth’s mock trial society president. “We divvy up roles and learn the facts inside and out, along with case law that pertains to them.”

To win, the students’ legal team doesn’t have to win over a jury, as in a real courtroom. But to rack up points, the team has to display to evaluators “a solid execution of the materials,” says Tracey. “We usually come in with good ideas, and a level of preparation that enables us do well on a good day.’

Julie Decerega ’18 prefers the role of defense attorney. “It’s easier to be on the defense team in criminal cases,” she says, “because the bar for the prosecution is so much higher. They have to prove guilt beyond a reasonable doubt.”

Prosecutors did marshal compelling circumstantial evidence in the Dylan Hendricks case, including incriminating testimony from the victim’s 13-year-old daughter (portrayed with tween-ish flair by Emily Minsky ’21). The obvious motives for the attempted murder are love and greed; the victim’s cheating spouse would have profited financially as well as romantically from her death. Unluckily for the prosecution, the crime was committed in the dark, and the victim had been taking drugs capable of impairing her powers of observation.

Proclaiming to the jury that Hendricks, his client, is not guilty, Tracey rehearsed in a sense, for his future career. He plans to be a litigator someday. Not everyone in the society shares that goal, but members say they learn, by competing in imaginary courtrooms, how complicated the legal system is and what it takes to build a persuasive argument from conflicting stories.

“It’s all about how you can bring the facts together and mold them with case law to prove a convincing point,” says Zoe Schwartzman ’21. “Seeing what other teams do improves our own strategies.”

Alex Brown is proud of Dartmouth’s recent showing at Boston College. “The results of this competition really speak to the astounding potential that this team has. All four awards earned were by lowerclassmen who have made the transition to college mock trial seamlessly. I look forward to seeing how this team can harness this momentum going into next year.”