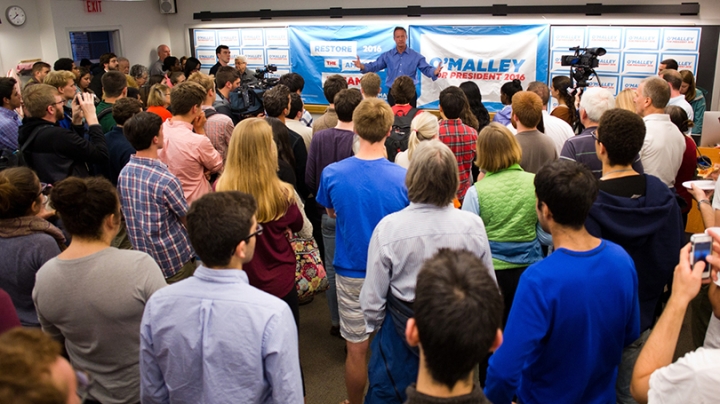 Dartmouth is proving once again to be one of the earliest stops for prospective presidential candidates in the first-in-the-nation-primary state of New Hampshire, with two nationally known Democrats landing here for public events this week and next.

Jason Kander, former Missouri secretary of state and founder of Let America Vote, will be at Alpha Chi Alpha on Wednesday, March 28, at 7 p.m., discussing voting rights issues. This will be his ninth trip to the state in the past year, and it includes a Democratic Party fundraiser, fueling speculation about a presidential run.

Martin O’Malley, former Maryland governor and 2016 Democratic primary candidate, will speak at Dartmouth on Monday, April 2, taking part in a panel discussion on issues of climate change and clean energy. This event will be held in Rockefeller 003 at 7 p.m. and the panel will include PhD student Nicholas Warren, adjunct environmental studies professor Melody Burkins, and sustainability leader Edie Farwell ’83.

Jennifer West ’20, president of the Dartmouth College Democrats, notes that neither candidate has declared that he is running for president in 2020, so the two visits are not officially campaign events. “However, both Kander and O’Malley are seen as likely candidates, increasing interest in their trips to New Hampshire.”

O’Malley was the first presidential hopeful to stop at Dartmouth ahead of the 2016 election, visiting campus in May 2015. In the months leading up to the New Hampshire primary in February 2016, Dartmouth students got a firsthand view of at least eight Republicans and four Democrats running in the race.

Although a handful of possible Republican candidates have visited the state this year, including President Donald Trump, Sen. Jeff Flake, and Vice President Mike Pence, there have not been any public Dartmouth stops by Republican presidential prospects … yet.

Tyler Baum ’20, vice president of the Dartmouth College Republicans, says students are gearing up for the political season. “We are excited for the midterms and upcoming presidential election, and we hope to bring each Republican candidate to campus. Our hope for the 2020 cycle is to bring the president to campus, but we are unsure at this time if that will be possible.”

Dartmouth’s strategic location has given generations of students a chance to engage in New Hampshire’s famous “retail politics” on behalf of presidential primary candidates, from Democrat Gene McCarthy in 1968 to Republican Ronald Reagan in 1980. The College has hosted six presidential debates on campus over the years, including the first-ever presidential “talk show” debate in 1984, co-moderated by television host Phil Donahue. Dartmouth also presented a 2008 Democratic presidential debate and a 2012 Republican presidential debate.