The biology major will pursue graduate study at the University of Oxford. 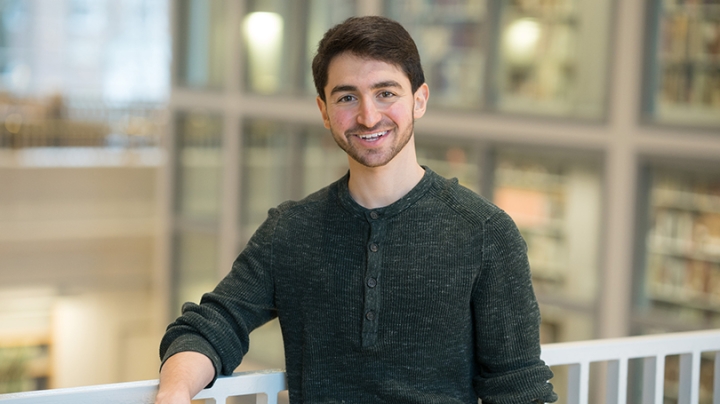 “I am excited become part of an international community that is driven to inspire positive change in the world,” says Nicholas Norwitz ’18. (Photo by Eli Burakian ’00)
3/27/2018
Body

Nicholas Norwitz ’18 has been awarded a 2018 Keasbey Scholarship to pursue graduate study at the University of Oxford.

The Keasbey Memorial Foundation, which funds the Keasbey Scholarship, was established in the 1950s by Marguerite Keasbey in honor of her parents. On a rotating basis, the foundation annually selects students from a dozen top American colleges and universities, including Amherst, Bowdoin, Brown, Cornell, Dartmouth, Harvard, Haverford, Middlebury, Princeton, Swarthmore, Wesleyan, and Yale. The last Dartmouth graduate to receive the honor was Matthew Alkaitis ’09.

“Nick Norwitz’s intellectual curiosity and hunger to solve complex problems exemplify the best that Dartmouth’s liberal arts tradition has to offer,” says Interim Provost David Kotz ’86. “I am delighted that the Keasbey Memorial Foundation has recognized Nick with this honor.”

Norwitz, a biology major, plans to use the scholarship—which fully funds two years of graduate study at Oxford—to complete either a master’s or a doctorate in Oxford’s department of physiology, anatomy, and genetics. “This is an incredible opportunity to develop mental and technical skills that will be invaluable to my future career as a physician-scientist,” he says. “I am also excited become part of an international community that is driven to inspire positive change in the world.”

“When you’re young and the world is new, it’s a lot harder to take daily curiosities for granted,” he says. Why do we yawn? Why do only our fingers and toes prune in the bathtub? He once performed a “caesarean section” on a dead garter snake only to discover that snakes “gestate” (partially digested) mice.

At Dartmouth, he says, “I’ve begun to acquire the skills to pose and pursue more nuanced and original questions. The only problem is, the more you learn, the more you appreciate how much more there is to learn. It’s an exciting and humbling embarrassment of intellectual riches.”

He has taken so many biology courses that he has fulfilled the major requirements twice over. “I actually asked, half-jokingly, if I could do a double bio major—but they said no, you can’t do that,” he says. To date, he has earned 15 citations for exceptional academic work.

Selected as one of four biology resident experts who provide academic support to students in all biology courses, Norwitz has tutored classmates throughout his time at Dartmouth. “I love to learn, I love to master material—but it’s not nearly as gratifying as helping someone else master material,” he says.

In high school, Norwitz was a marathon runner. At Dartmouth, sports injuries prevented him from engaging in competitive athletics—but led to an interest in sports medicine and endocrinology, and even a co-authored paper with one of his doctors, “superstar sports endocrinologist” Kathryn Ackerman. That partnership led to an internship at Massachusetts General Hospital and is part of the reason Norwitz has chosen to work in a human muscle metabolism lab at Oxford next year. “Dr. Ackerman is not only my physician, she is my friend, my role model, and, I hope, my future mentor,” Norwitz says.

Norwitz has worked as a research assistant in Associate Professor of Biological Sciences Sharon Bickel’s lab since his first year at Dartmouth. Bickel calls Norwitz “truly an exceptional student with the potential for a brilliant career in the life sciences.”

She says, “In my time at Dartmouth, I have never encountered a student as talented as Nick. He has remarkable intellectual and problem-solving skills, and approaches each problem/question/challenge as an opportunity for learning, not an obstacle that must be overcome. These are the attributes of a life-long scholar.”

“I cannot overstate the catalytic role that Professor Bickel has played in my achievements,” Norwitz says. “Since she invited me to join her lab in 2015, she has pushed me to grow as an academic and as a person. Professor Bickel truly epitomizes the immeasurable value of Dartmouth’s faculty, as well as the butterfly effect that a single mentor can have on the life of a student.”

Long-term, Norwitz plans to earn an MD-PhD, a degree that will be supported by the Barry M. Goldwater Scholarship he was awarded as a sophomore. He has been accepted to Harvard Medical School, which is allowing him to defer matriculation until he returns from the UK.

Assistant Dean for Scholarship Advising Jessica Smolin encourages students interested in Keasbey and other scholarships to reach out to her office. “The application process is incredibly valuable in itself because it encourages you to reflect deeply on your values, your motivations, and your strengths. These are important skills in any setting.”

And, she says, “If you don’t apply, you can’t win.” For information about applying for Keasbey and other programs, visit Dartmouth’s Office of Fellowship Advising website.