Men’s and women’s Nordic and Alpine teams head to the NCAA finals in Colorado. 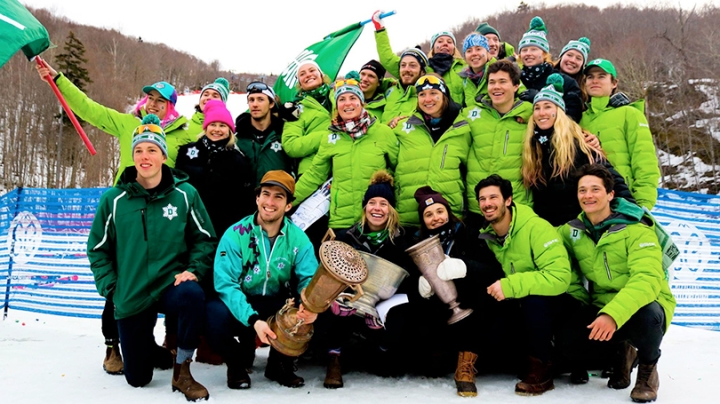 The Dartmouth ski team will have 12 members competing for NCAA championship medals in Steamboat Springs, Colo., starting Wednesday; Dartmouth men’s hockey takes on Harvard Friday in the first game of the ECAC quarterfinal playoffs; and the Dartmouth equestrian team clinched a first-place regional title on Sunday at Endicott College to close out the 2017-18 regular season.

This will be the third straight year that Dartmouth sends a maximum number of skiers to the national championships, with three competitors each in men’s and women’s Alpine and men’s and women’s Nordic events. Dartmouth is also contending for a NCAA Championship team title for the first time since 2007.

The trip to Steamboat Springs caps off a successful season that ran parallel with Dartmouth sending 16 athletes and two head coaches to the Olympics in Pyeongchang—the most ever for the Big Green. Dartmouth’s skiers were keeping an eye on the Winter Games as the season closed out, says Cami Thompson Graves, Dartmouth director of skiing and head coach of women’s Nordic skiing.

“We were all watching, on the Nordic side especially. When Jessie Diggins and Kikkan Randall took gold for the U.S. in the women’s team sprint, that was incredible. It just brings a lot wider recognition to the sport, and it inspired our team,” she says.

Dartmouth secured the trip to the championships at the end of February after winning a second NCAA Regional title in two years at the Middlebury Carnival, where Katharine Ogden ’21 completed a sweep of the women’s cross-country races and Brian McLaughlin ’18 won gold in the men’s giant slalom. Following the Middlebury Carnival, coach Peter Dodge was named the EISA Alpine Coach of the Year for the third time in his 29-year career.

The NCAA Championships will be streamed live on NCAA.com Wednesday, March 7, through Friday, March 9.

Men’s Hockey to Face Off With Harvard

For men’s hockey, the series against Harvard marks the seventh time in the last eight years that Dartmouth has advanced to the quarterfinals. The Big Green will play the Crimson in Cambridge at 7 p.m. Friday and Saturday. If necessary, a Game 3 in Cambridge will be played at 5 p.m. on Sunday. All three games will be carried live on NESN as well as streamed through the ECAC Hockey’s website.

Corey Kalk ’18, who scored the winning goal against St. Lawrence in the tie-breaking third game of the first-round playoffs, says he is focused on keeping his final season with the Big Green going. When he fired the winning shot to defeat the Saints on home ice Sunday, he literally knocked the net off the post as Thompson Arena erupted in cheers.

“Making the finals would mean everything to me, not only because you never know what the future holds, but sharing the experience and memories with my classmates and teammates is something you never forget,” says the economics major from Maple, Ontario.

The equestrian team clinched a first-place regional title on March 4 at Endicott College in Beverly, Mass.

A fourth-place finish out of 11 teams at the Endicott show was enough to secure Dartmouth a first-place regional title for the season. Captain Claire Bick ’18 finished third in Open Flat, which qualified her to compete in the Regional Championship at Dartmouth on March 31. Bick had already qualified to compete in Novice Fences at Regionals alongside three other Dartmouth riders: Olivia Champ ’19 in Open Flat and Fences, Sue Mohieldin ’19 in Walk-Trot-Canter, and Meghan Poth ’20 in Novice Flat.

“I am so proud of this team for their Team Regional Championship finish. They have worked hard all year both on and off the horse and these results prove that,” says Sally Batton, director of riding and equestrian team head coach, “It’s going to be a tough battle at the New England Championships to vie for a Nationals spot, but I’m confident their teamwork and skills will take them there.”

Dartmouth will host the Regional Championship at Dartmouth’s Morton Farm at the end of the month before showing as a team at Mt. Holyoke for the New England Championships on April 7.