“It’s forced me to defend what I think,” says Sunny Drescher ’20. 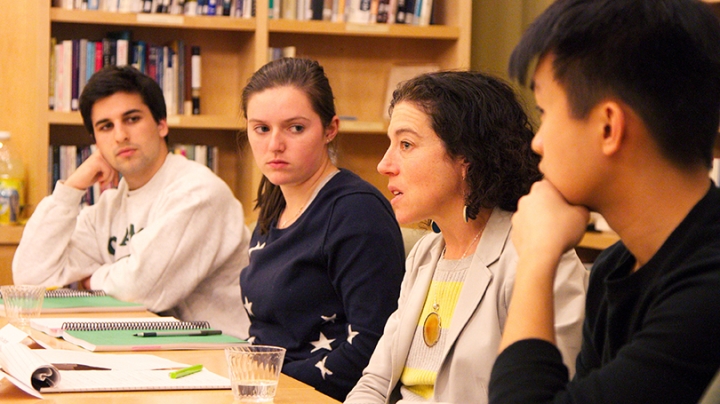 “Are you interested in some of the hot button issues the Supreme Court will decide this coming term involving cell phones and the Fourth Amendment, Trump’s immigration ban, discrimination against same-sex couples in providing wedding services, and the permissibility of political gerrymandering?” asks Dartmouth’s Ethics Institute on its website. 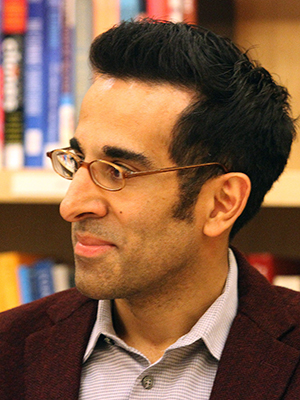 Sonu Bedi, director of the Ethics Institute, listens to students at a Supreme Court workshop. (Photo by Herb Swanson)
“The law is not just for lawyers,” says workshop creator Sonu Bedi, the Joel Parker 1811 Professor in Law and Political Science and the Hans ’80 and Kate Morris Director of the Ethics Institute. “I believe a liberal arts education should provide students a way to understand the issues raised in these cases—cases that have an impact on all of us.”

“This case has gotten a huge amount of attention, which it deserves,” Daskal tells the students, “because it raises really interesting questions about how to protect privacy in the digital age, what the Constitution says about it, and how the court should rule.”

At issue in the case: whether the government should be allowed to get—from third party providers such as cell phone companies—metadata that could help law enforcement determine, for example, where a caller was located at a given time.

“In this case, they got data for about 121 days for one defendant and 188 days for another—between three and four months,” Daskal reminds the students, who were required to read about the case before the seminar. “They got this from cell phone companies and used it to place these individuals near nine robberies for which they were ultimately convicted.”

The plaintiffs claim that the government violated the Fourth Amendment, which grants people the right “to be secure in their persons, homes, papers, and effects against unreasonable searches or seizures,” Daskal explains.

But that raises questions our founding fathers could not have anticipated: Is a cell phone analogous to property? And should a cell phone service provider be required to hand over to the government information about users it needs to conduct business, that is, connecting calls?

For several hours, Daskal, the students, and Bedi debate whether and when American citizens should expect privacy—and how much—as they use modern technology to communicate with others.

“Nothing is really private in the internet age,” says Eliza Ezrapour ’18, whose major is geography modified with law. “Whether the government may legally seek out that information is the important question.”

Bedi asks the students if they have a higher expectation of privacy when they write letters and send them via the U.S. Postal Service rather than using email and texts. He looks surprised when most say they expect more privacy from snail mail, yet rarely use it.

The discussion about the government’s right to access cell phone data raises thorny questions for Sunny Drescher ’20, a quantitative social science major who plans on a career in law or policy-making.

“I don’t want to say I’m freaked out, but I’m wondering what’s going to happen in the future with technology increasing so fast, and the government not being able to be able to keep up with creating policy that takes into account all these technological practices that are integral to everyday life,” she says.

Drescher says she has learned from the Supreme Court workshop how to appreciate points of view she may not share. “It’s forced me to defend what I think.”

Ezrapour finds Carpenter v. United States “especially interesting, because usually we debate matters of law, but tonight we got into social implications. It’s really helpful to meet practitioners who see these issues first hand, who know how the law is being interpreted by both sides, and what it could look like to remedy a problem.”

Bedi hopes to build the seminar series into a two-term fellowship program next year. “This workshop is unique,” he says. “Students are exposed to cases the Supreme Court is currently reviewing, and to my knowledge no other undergraduate institution has such a program.”