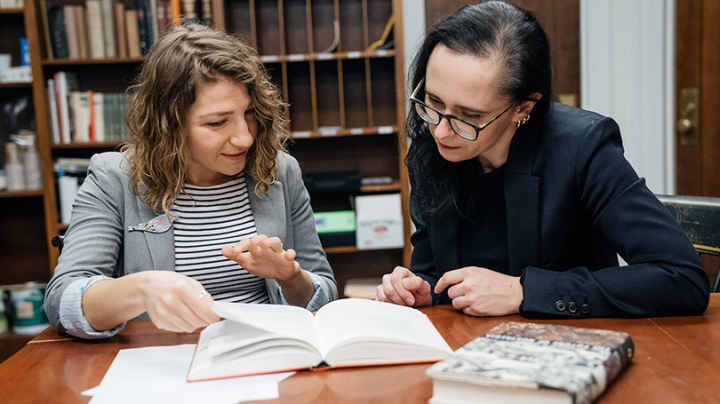 When Tetiana Savchynska began translating Kazuo Ishiguro’s latest novel, The Buried Giant, into her native Ukrainian, she had no inkling that the Japanese-born author, who writes in English, would win the 2017 Nobel Prize for Literature.

“When I woke up to the announcement, I wondered if my life would change a little bit,” says the professional translator, Fulbright fellow, and graduate student in comparative literature, “because I was in the middle of proofreading my translation.”

Phone calls and emails did pour in, especially from Ukrainian journalists who had not yet read Ishiguro’s book. “They didn’t yet have a text to work with,” she says, “so they contacted me. But translators are used to feeling invisible. I am not used to that kind of attention.”

She got even more attention, in the U.S. press, with an assignment she wrote for a class taught by her adviser, Yuliya Komska, an associate professor of German. “I asked everybody to write a personal opinion piece that could, at least hypothetically, be published,” Komska recalls. “But of course, for actual publication you have to have something that stands out, that is very current.”

Savchynska’s essay, “Ishiguro Before and After: On Translating a Nobel Laureate into Ukrainian,” did stand out, so Komska encouraged her to send it to the Los Angeles Review of Books—which published it.

“I had been working on my translation of The Buried Giant with Ishiguro’s voice in mind—his style, his rhythm, his narration. But after Oct. 5, that image of him changed: there he was in front of me, Nobel Prize in hand, and there were the Ukrainian readers of his latest novel, leaning over my shoulder, to look him in the eye. Whether that look will express bewilderment or admiration, is, to a great extent, my responsibility,” she writes in the op-ed.

Ishiguro is not the only leading author that Savchynska has brought to Ukrainian readers. She has also translated John Le Carré’s spy novel The Night Manager.

“It was a big project—700 pages,” she says, “with so many characters, all speaking their own dialects and accents.” Savchynska says it’s important for Ukrainians, who declared independence from the Soviet Union in 1991 (the year she was born) to read Le Carré’s work as pro- and anti-Russian groups clash in eastern Ukraine. “Le Carré shows us that nothing is black and white, and we should be careful about using labels.”

Literary fallout from the conflict in eastern Ukraine has been a mixed blessing, says Komska, who, like her student, was born in Ukraine. “Russian-language books have been banned by the Ukrainian government. I am not necessarily in favor of a ban, but it does open the door for books translated from other languages to enter the market.”

Which is why Savchynska has her hands full, holding down her job as a translator for a leading Ukrainian publishing house while completing her master’s degree at Dartmouth. Her thesis is about the translation of an Alexander Pushkin poem by the late Walter Arndt, the Sherman Fairchild Professor of Humanities and Professor of Russian Language and Literature Emeritus.

“It was published in Playboy in 1974, but became censored and changed,” says Savchynska, “and I am trying to show how the poem’s translation made it an item in the Cold War traffic of texts.”

Savchynska says pursuing her master’s degree in comparative literature—she is one of 11 candidates representing five different nationalities—has made her a deeper reader and therefore a better translator.

“People have questioned why I was going back to school—especially those who knew I had a job and was doing perfectly fine,” she says. “But when I read any kind of text now I see so many different things in it that I hadn’t seen before.”

Antonio Gómez López-Quiñones, an associate professor of Spanish and director of graduate studies for the program, says he’s pleased that Savchynska is applying what she’s learning at Dartmouth to a career already well underway. “In an increasingly globalized and interconnected world, our MA in comparative literature encourages our students to pose interdisciplinary questions, and to understand how different geopolitical and cultural contexts interact with each other. This is a demanding discipline, but it is also extremely rewarding.” And next year, he says, for the first time, undergraduates will be able to minor in translation.