Katie Hornstein and Michelle Warren are among the 78 ACLS Fellows this year. 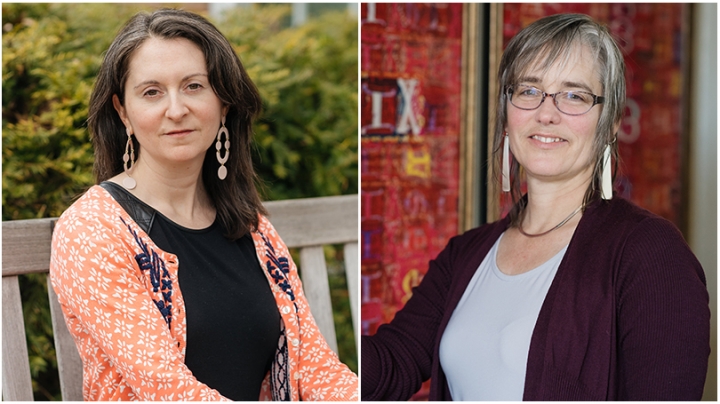 Medievalist Michelle Warren and art historian Katie Hornstein have been named 2018 ACLS Fellows by the American Council of Learned Societies. They are among 78 fellows selected this year from about 1,150 applicants nationwide to receive the fellowship, which is one of the most prestigious honors awarded in the humanities.

ACLS Fellowships have supported scholarship in the humanities for more than 50 years. Fellows are chosen based on “their potential to make an original and significant contribution to knowledge, resulting from research on cultures, texts, and artifacts from antiquity to the present, in contexts around the world,” said Matthew Goldfeder, director of fellowship programs at ACLS, in a press release.

A Medieval Text in the 21st Century

That intellectual curiosity has led Warren to earn not one, but two major fellowships this year: the Guggenheim, announced earlier this month, and the ACLS Fellowship. She will use the grants to finish her third book, Lives of a Medieval Book in the Digital Dark Ages.

“I am so honored by this recognition, especially for a book that I once thought of abandoning,” Warren says.

In her book, Warren will use a 15th-century manuscript about King Arthur and the Holy Grail to explore 800 years in the evolution of how a text is read—right up to the present, when the digitization of medieval manuscripts is both making old books broadly accessible and changing how scholars read them.

The seed of the idea began for Warren in the early 1990s, when she was a graduate student at Stanford. But other projects came first—including, among others, two books (History on the Edge: Excalibur and the Borders of Britain, 1100-1300 and Creole Medievalism: Colonial France and Joseph Bédier’s Middle Ages) and a digital humanities project focused on The English Prose Brut Chronicle, a medieval manuscript in Dartmouth Library’s Rauner Special Collections Library.

“With more and more medieval manuscripts being digitized, we need to be asking more questions about how technology is affecting history,” she says.

“What does the interface do to the way we perceive relationships among books? How can we make new discoveries? But also, what connections are being hidden? It’s important to try to figure out how software is shaping our sense of material culture.”

Warren says she’s grateful to Dartmouth for opportunities to broaden her scholarly interests. “My work has changed so much over the past few years, thanks in part to a Scholarly Innovation Award from the Dean of Faculty that enabled me to develop new expertise in the digital humanities. I also learned a lot from my work on the Presidential Cluster for Digital Humanities and Social Engagement. With new methods and theories, I started to see my old questions in an entirely new light.”

Of her current project, she says, “In some ways, this research departs from my previous work in postcolonial studies. In other ways, though, I’m continuing my long-standing investigations into the meaning of the Middle Ages in modern times.”

On receiving both the Guggenheim and the ACLS Fellowship in the same year, Warren says she’s learned the power of persistence. “I’ve applied for a lot of fellowships in my career—almost always without success. It’s incredible to have this once-in-a-lifetime opportunity at this stage.”

The Lions of Paris

Through the ACLS Fellowship, Assistant Professor of Art History Katie Hornstein plans to spend next year in France completing research for her second book, Leonine Encounters in Nineteenth-Century France.

The inspiration came as she was finishing her first book, Picturing War in France, 1792–1856, and looking for a new project. “I was geeking out one night in Google Books—as one does if you’re a historian,” Hornstein says.

She was researching luxury imports to France following the French colonization of Algeria in 1830 when she came upon a striking fact: Thousands of live lions, hyenas, and panthers were imported into France in the 1830s. “I was struck by the sheer quantity of animals being sent from Algeria to France and wondered why. I discovered that French generals and other high-ranking colonial officials often sent these animals to the menagerie of the Jardin des plantes in Paris, France’s national zoo.”

In the 19th century, most of France’s zoo lions came from North Africa, a direct result of colonialism. Overhunting and other pressures of colonialism drove the North African Barbary lion to extinction by 1893. But during that time, Hornstein says, artists began to see lions differently. For one thing, the public was encountering real lions for the first time, in the newly nationalized zoo as well as in a burgeoning circus culture.

“Artists often visited the menagerie to make sketches from life, which means that they were coming into contact with these foreign animals and, in an indirect way, participating in their importation into France through the mediating presence of art,” Hornstein says.

Lions have had symbolic political meaning in France stretching back to antiquity. “In France maybe the most important significance of the lion is as a symbol of just rule—the magnanimity and justness of power,” Hornstein says. “But my project is interested in how this changed over the course of the 19th century.”

An example of the impact of exposure to real lions, she says, shows up in a famous painting, Head of a Lioness, by 19th-century French artist Théodore Géricault.

“He goes to the zoo in Paris and encounters lions in the flesh,” Hornstein says. “Géricault makes what I consider an unprecedented painting of a lion. She’s not symbolic, she isn’t a metaphor for something else—it is actually a painting that is about the experience of encountering a wild animal. It’s a painting that could only have been made with a public zoo culture.” (Hornstein has an article on the Géricault lioness forthcoming in The Art Bulletin.)

“Because lions are so prized within the history of visual representation, this project is giving me a theoretical way to think about that problem of what is real, and how representation sets up expectations,” Hornstein says.

She credits Dartmouth with supporting her in unconventional scholarly endeavors. “I work on weird things in the 19th century—my first book is on battle painting, which is not something that’s been studied in art history very much, and now I’m writing a book about lions,” she says. “I love that I can be valued as a scholar for working on outside-the-box topics.”