The classicist will use a Mellon New Directions grant to apply modern forensics to antiquity. 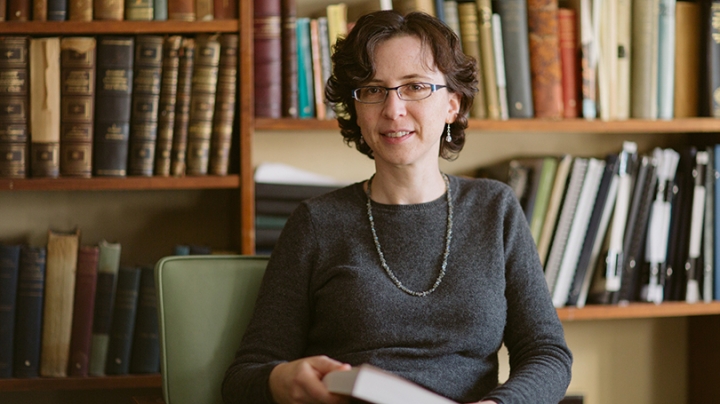 “The whole idea behind the New Directions Fellowship is you get to be a student again for a year, which should be lots of fun,” says Assistant Professor Julie Hruby. (Photo by Robert Gill)
4/12/2018
Body

As an undergraduate at Duke University, Julie Hruby—now an assistant professor in the Department of Classics—was numbering artifacts at the site of her first archaeological excavation when she noticed something interesting.

“I was putting a number on a loom weight”—a clay disc used by Greek weavers in antiquity—“and I realized it had a complete palm print. I thought, I bet you can do something with that. And it turns out you can.”

For Hruby, that moment began a lifelong fascination with what fingerprints on ancient clay artifacts can reveal about the craftspeople who made them and the societies they lived in—an area of inquiry that has yet to be rigorously examined. “It’s a physical reflection of the people who made the stuff, and it can answer all sorts of super-cool questions,” Hruby says.

Now Hruby has received a New Directions Fellowship from the Andrew W. Mellon Foundation to train in advanced forensic techniques that will allow her to match fingerprints from ancient objects and apply computational analysis to determine, for instance, the gender and age of an object’s maker.

New Directions Fellowships are designed to help scholars in the humanities develop skills outside their specialties that will help them “work on problems that interest them most,” according to the Mellon Foundation’s website.

“Professor Hruby’s work on ancient fingerprints requires training in methodologies that are not typically used by scholars in the field of classics,” says Barbara Will, associate dean of arts and humanities. “Her achievement in receiving one of the most prestigious fellowships for humanists in the country to pursue this study is wonderful news for her and for Dartmouth.”

“The whole idea behind the New Directions Fellowship is you get to be a student again for a year, which should be lots of fun,” Hruby says. The fellowship funds an academic year plus two summers’ worth of study, including salary, tuition, travel, and other expenses.

Hruby will use the fellowship to attend an intensive fingerprint analysis training program, where she will study advanced techniques of fingerprint matching. In addition, she will spend a term working with Bruno Frohlich, a visiting professor in the Department of Anthropology and a retired Smithsonian Institution forensic anthropologist. Frolich, who pioneered three-dimensional CAT-scanning techniques for ancient objects, teaches an undergraduate course on forensic anthropology that Hruby plans to take.

Hruby already has five sets of clay artifacts with preserved fingerprints to which she hopes to apply these forensic techniques. They include a collection of Minoan administrative documents; a group of Neolithic steatopygous, or “full-figured,” female figurines; Mycenaean tablets written in the ancient Linear B script; a collection of archaic and classical ceramic sculptures; and Roman pottery from the famous Antikythera shipwreck off the coast of Greece.

She hopes her fingerprint research will, among other things, contribute new data to longstanding debates about whether the ancient Minoan culture was matriarchal or patriarchal, whether women as well as men were potters in ancient Greece, and the role of children in ancient ceramics workshops.

Some of Hruby’s research has already been supported by CompX grants from the Neukom Institute for Computational Science and funding from the John Sloan Dickey Center for International Understanding, the Office of the Provost, and several external sources. And Hruby is collaborating with Neukom Institute Director Dan Rockmore, the William H. Neukom 1964 Distinguished Professor of Computational Science and associate dean of the sciences, and Yang Wang, chair of the math department at the Hong Kong University of Science and Technology, to develop computational methods for analyzing the fingerprints, based on a reference collection of fingerprints of modern Greek potters.

“Julie’s work is an outstanding example of the power of great interdisciplinary work: Rather than simply deploy old tools in a new setting, she is pushing mathematicians and computer scientists to make advances on important problems in their home disciplines in order to help her address deep and fascinating historical riddles,” says Rockmore. “It’s the kind of work that sets your brain on fire with its possibilities and potential, and I’m both excited and grateful for the opportunity to be a part of it.”

Hruby says she is excited about sharing her research in the classroom. “I find that when I’m excited about a topic, my students are excited about that topic, too. And because I teach a series of Greek archaeology classes that are chronological in scope, and the project is looking at material from the Neolithic up through the Roman period, I will have something to bring into every single class I teach. So that’s really cool.”