More Solar Panels to Be Installed on Campus This Summer 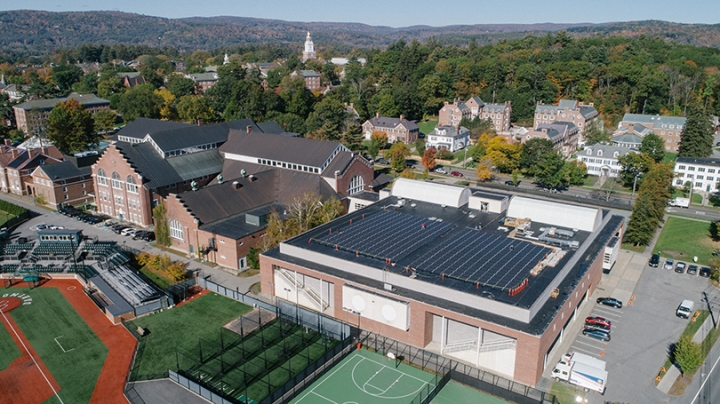 Solar panels are scheduled to be installed this summer on eight College buildings, adding to Dartmouth’s ability to reduce its dependence on fossil fuels and also allowing the institution to purchase electricity at a discounted rate.

Work on the installations is planned to begin in mid-June, after commencement, with the solar systems expected to begin producing electricity in the early fall. Before the work can begin, the College must first get site plan approval from the town of Hanover. Dartmouth planners expect to meet with town officials next month or in early June.

“The systems to be installed will triple the amount of energy being generated by solar systems on our campus. Once these are in production, approximately 10 percent of Dartmouth’s buildings will have photovoltaics,” says Abbe Bjorklund, Dartmouth’s director of engineering and utilities.

Increasing reliance on renewable sources of energy is one of several goals set forth in the campus sustainability plan announced on Earth Day last year by President Phil Hanlon ’77. Solar photovoltaic systems use solar panels to absorb sunlight and convert it into electricity.

The new systems are to be installed by ReVision Energy, a company with offices in New Hampshire, Maine, and Massachusetts with which Dartmouth has a “purchased power agreement,” known as a PPA. The systems will be installed at no cost to the College, which then purchases the electricity generated by the solar panels from ReVision at a discounted rate. In six to seven years, the College can buy the panels outright at a discounted cost.

The agreement with ReVision works this way: Although the federal government provides tax credits, and many states, including New Hampshire, offer tax rebates on solar installations, Dartmouth does not carry a tax liability and thus cannot benefit directly from this type of financial incentive. ReVision can qualify for the subsidies, allowing it to pass along savings to customers, in this case, Dartmouth, in the form of discounted electricity.

The eight College buildings were selected based on their orientation to the sun, lack of shading by trees, the age and condition of the roof, and the ability of the roof and structure to support the system. All of the systems will be mounted on south-facing sloping roofs, except at ’53 Commons, where the system will be on a flat roof.

Dartmouth’s first rooftop solar system was installed in 1995, on Murdough Hall, through an alumni donation. In October 2016, a ground-mounted solar tracker was installed by Campus Services adjacent to Moore Hall. Last summer, a group of Class of 1967 alumni funded the installation of a photovoltaic system on the renovated ’67 Bunkhouse that is providing electricity for the Moosilauke Ravine Lodge facilities. The College’s organic farm barn also acquired solar panels through a grant from Dartmouth’s Green Community Fund.

Bjorklund says the College’s engineering and utilities team is working to identify viable sites for larger-scale solar systems to serve the campus. The College estimates that a large-scale system could generate as much as 20 percent of the electricity used by the College.