The scholar of political media plans to study the effect of fake news on democracy. 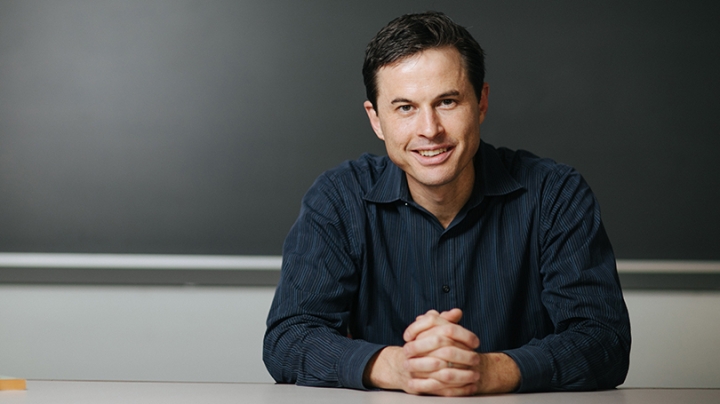 “Public concern is growing about the way that false and unsupported information circulates online and its effects on our democracy,” says Professor Brendan Nyhan. (Photo by Robert Gill)
4/25/2018
Body

Professor Brendan Nyhan has been named a Carnegie Fellow in recognition of his research on increasing media trust and countering misinformation in the era of fake news. He is one of 31 scholars and writers chosen this year by the Carnegie Corporation of New York to support significant research, writing, and publishing in the humanities and social sciences.

Carnegie provides up to $200,000 with each fellowship to support a book or major study. Nyhan plans to continue his work at Dartmouth during a nonteaching term funded by the fellowship, and he expects to work with Dartmouth students for research assistance and data coding, he says.

“I am grateful for this very generous investment in my work,” Nyhan says. “Public concern is growing about the way that false and unsupported information circulates online and its effects on our democracy. With support from Carnegie, I will be able to conduct new research that will help us better understand the causes and consequences of online political misinformation before the next presidential election.”

President Phil Hanlon ’77 says he is delighted that the Carnegie Corporation of New York has recognized the importance of Nyhan’s work.

“Brendan Nyhan’s research into the long-term effect of misinformation on our democratic institutions confronts one of the most important issues of our day,” President Hanlon says. “In addition, his commitment to working with undergraduates is a prime example of how Dartmouth faculty not only teach, but also partner with students to take on the world’s great challenges.”

The Carnegie fellowship is one of the most prestigious awards in the social sciences, says Professor Dean Lacy, chair of the government department, and will allow Nyhan to “expand his important and timely research on trust in the media. Americans appear to be losing faith in the mainstream media and relying more on nontraditional and fake news outlets. Propaganda is crowding out the news. Nyhan’s work will diagnose this malady and hopefully find a cure.”

In addition to teaching about political communications, the media, and applied social science statistical methods in the department of government, Nyhan has been widely published in the areas of misinformation and public perceptions. He is co-founder of Bright Line Watch with John Carey, the John Wentworth Professor in the Social Sciences. The social science research site monitors the stability of democratic norms and institutions. Nyhan is also a regular contributor to The New York Times blog The Upshot; and he is part of a consortium of 16 nationally known scholars calling for a multidisciplinary effort to stem the flow of fake news and address the “underlying pathologies it has revealed.”

For 2018, the Carnegie Corporation received 270 nominations for scholars and writers whose work “applies fresh perspectives to some of the most pressing issues of our times, shows potential for meaningful impact on a field of study, and has the capacity for dissemination to a broad audience,” according to the Carnegie website. Each nominee underwent a preliminary evaluation by experts in various fields. The top proposals were then forwarded to a jury of scholars for the selection of 31 fellows.

“We were reassured by the immense talent and breadth of experience reflected in the proposals from this year’s nominees for the Andrew Carnegie Fellows Program,” said Vartan Gregorian, president of Carnegie Corporation of New York and president emeritus of Brown University.