Professor Robyn Millan on Why Small Satellites Are Big

The physicist advocates for the use of small, experimental spacecraft.

Professor Robyn Millan thinks small—small satellites, that is. On Jan. 31, she went to Washington, D.C., where she extolled the virtues of diminutive spacecraft.

At the invitation of the National Academy of Sciences, Millan, the Margaret Anne and Edward Leede ’49 Distinguished Professor of Physics and Astronomy, spoke to a group of about 50 scientists and engineers, some of whom had been involved in the early days of the space race, back in the 60s. It was 60 years to the day since the United States launched its first satellite, Explorer 1, just 14 months after the Soviets’ Sputnik 1 reached orbit. “Something like 69,000 people also watched the videocast, which I am glad I didn’t know beforehand,” she says.

Millan talked about the legacy and the future of small satellites, how the payloads started small—as Sputnik and Explorer were—and grew large over time. And how, with their increasing size, they took longer to develop and became expensive, heavier, and harder to launch. Now there has been a resurgence—an exponential growth—in the use of small spacecraft.

“There has been a lot of interest in the space research community because the hope is that by building these small things we can start to do different kinds of science. Launching an array of small satellites can permit multiple measurements in real time, like a series of buoys in the ocean or weather stations on Earth,” says Millan.

She says they are cost-effective, allowing their use in places too risky for a larger, more expensive satellite. “Building a small satellite may cost $1 million, while a larger one can require hundreds of millions. You could do things like let them dive deep into the atmosphere and let them burn up, but you’re learning something on the way in, and you don’t lose your billion-dollar mission.” 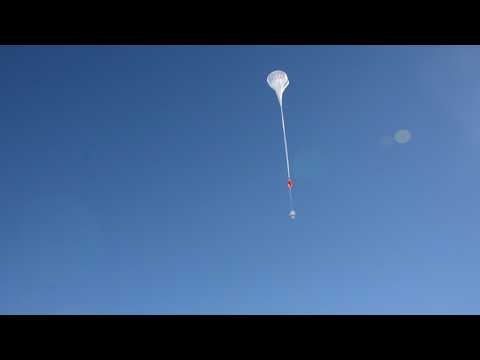 Small satellites are well suited for Millan’s area of study—the potentially destructive, high-energy electrons that streak into Earth’s atmosphere from the sun at velocities approaching the speed of light. They may cause ozone depletion and can damage the orbiting satellites that are used for navigation and communication. She had previously used a series of high-altitude balloons carrying X-ray detectors, but satellites can stay in positions for months or even years, collecting significantly more information.

Millan’s space physics research has applications that go beyond Earth’s orbit. “There is going to be a little more of a shift toward human exploration which we had seen with previous administrations,” she says, “and in order to send people to Mars and the moon, you need to understand the radiation environment to which people and their equipment will be exposed. The science that we are doing is directed toward an understanding of the environment that people will need to survive in—a changing environment that depends on the activity of the sun.”

Millan’s proposal for a CubeSat experiment was recently selected for funding by NASA. The CubeSat-based research will build on the results of the balloon program. “It is a follow-on to try and understand some of things we found in the balloon experiment regarding the rain of particles falling to Earth.” 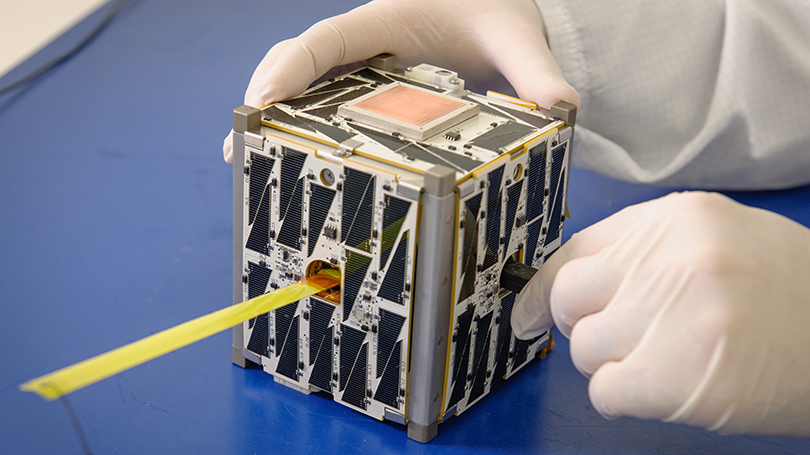 CubeSats, such as this PhoneSat 2.5 built at NASA’s Ames Research Center, are the wave of the future, says Professor Robyn Millan. (Photo courtesy of NASA Ames)

As the name implies, a CubeSat is a cube-shaped device, designed to operate as a miniature satellite. It is about four inches on a side and several can be strung together to carry a variety of monitoring and measuring instruments.

Millan plans to involve her students in the construction and development of the new CubeSat, much as she did in the balloon experiments. “Right now, space is booming again, attracting private companies like SpaceX and Virgin Galactic,” she says. “I am even seeing it in the undergraduates, with a lot more students interested in space again, and getting excited about it.”

She says she is “always recruiting students. We can involve undergraduates in pretty much all aspects of the research. It’s just a matter of finding the right project and mentoring them.”

Her current undergraduate cadre includes Andrew Sosanya ’20, who is working on a data analysis project from the balloon experiment. “Working in the lab has given me an insight into space physics research—research that is experimental and much more hands-on than theoretical research,” he says.

Claire Gasque ’19 has worked with Millan for more than a year on a project using NOAA satellite data to investigate high-energy particles in the upper atmosphere. “One of my favorite experiences working with Professor Millan involved machine learning techniques,” says Gasque. “Neither of us had any prior knowledge of the topic, so, last fall we took an online machine learning course together, meeting weekly to discuss how the course topics could relate to my project. I loved the whole experience, not just learning from, but learning with a professor.”

Among her former students, Millan mentions two who have pursued careers in the space industry. “Julianna Scheiman ’11 graduated with an engineering degree and is now a manager on the SpaceX landing booster program. She worked on the balloon project when we were just getting started and told me the reason she got her job was the hands-on experience she got working with us.” Another alumna, Kathryn Waychoff ’16, works for Blue Origin, an aerospace manufacturer and spaceflight services company set up by Amazon founder Jeff Bezos. Millan says Waychoff is involved in designing a lunar lander.

“Promoting student involvement is important because it helps people understand that what we are doing on the research side of things is actually benefiting the students a lot,” says Millan. “I encourage students to get into research early in their time at Dartmouth and try a few different things. I’d like all of our students to have many opportunities to figure out what they really love to do.” 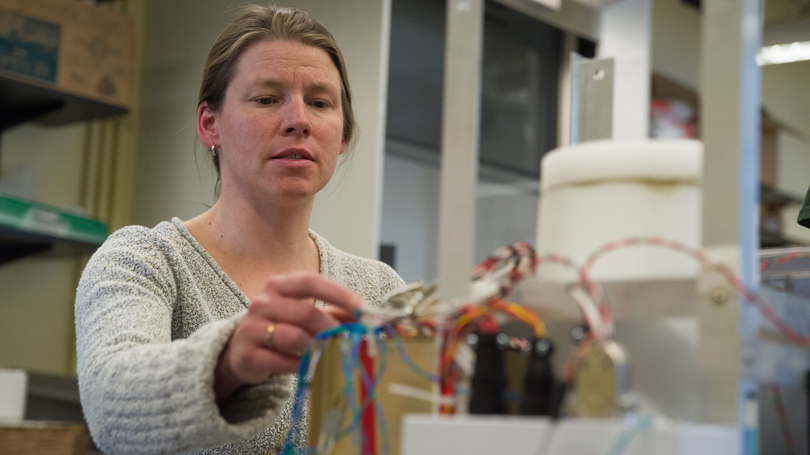 Professor Robyn Millan prepares a science payload for a launch into the stratosphere. (Photo by Eli Burakian ’00)
Written by
Joseph Blumberg
Share this
FacebookTwitterEmail
In the News