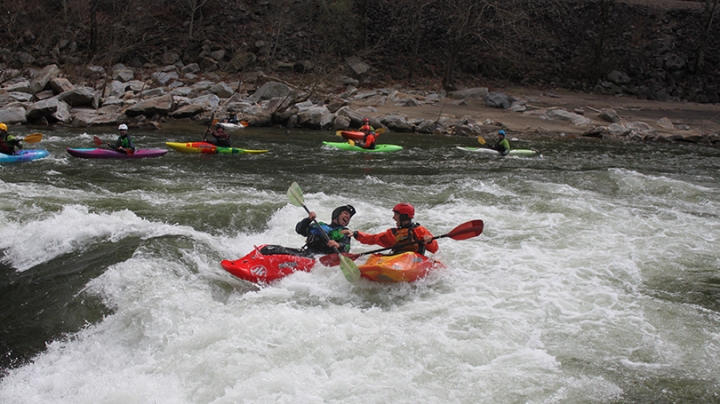 From left, Ledyard members Jackson Harris ’20 and Sam Albersten ’19 joke while surfing “Jaws,” a wave on the Nolichucky River in Tennessee, during the club’s annual spring whitewater trip in March. (Photo by Jesse Feldman-Stein ’18)
4/17/2018
Body

The Ledyard Canoe Club, named for the man who paddled away from Dartmouth in 1773 to wander the globe, celebrates wild rivers, exploration, and whitewater paddling at Riverfest 2018, running Friday, April 20 through Sunday, April 22.

The weekend is built around the 55th running of the Mascoma Slalom race on Saturday, April 21, and the Wells River Rumble, a whitewater kayaking race on the Wells River in Vermont, set for April 22.

“The Wells is a Class IV river, with six major rapids and a waterfall with a 12-foot drop. I consider it the home river for Dartmouth,” says Ledyard member Jackson Harris ’21, who grew up whitewater paddling in the South Fork American River near his home in Coloma, Calif. He had heard about the exploits of Ledyard veterans before he applied to the College. “It was one of the things that made me commit to Dartmouth.”

The Wells River Rumble is a mass start race. “It’s essentially what we call a boater-cross race. Everyone’s in the same rapids at the same time, and the winner takes it. It’s a really good time,” Harris says.

This year the club is also hosting the second Dartmouth Explorers Symposium, featuring presentations by Ledyard alumni who have been part of historic adventures. Among them are Wick Walker ’68, a member of the first-ever U.S. whitewater racing team at the 1972 Munich Olympics, and Dan Dimancescu ’64, who organized Ledyard’s 1,700-mile Dartmouth Danube expedition, which became a National Geographic cover story in 1964.

“People are going to present on how these adventures, these experiences, have impacted their lives in many, many ways that they never expected,” says Jesse Feldman-Stein ’18, a past president of Ledyard and a Riverfest organizer. “This ties into a fundamental tenet of Dartmouth—that there are so many ways you can learn. It’s all about rounding yourself out. I think this is the importance of the DOC and Ledyard.” 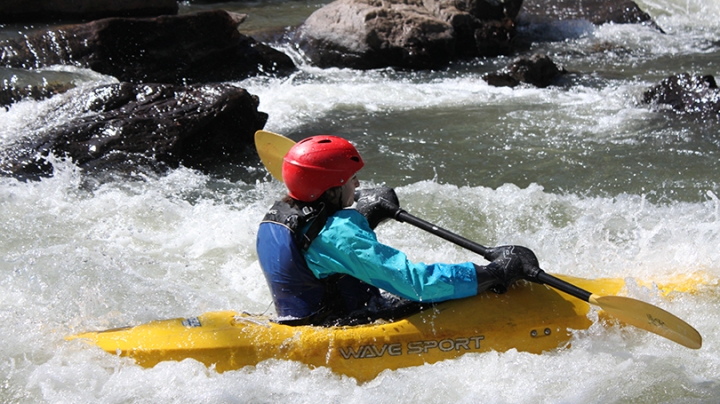 Kat Adelman ’21 paddles on the French Broad River in North Carolina during the Ledyard spring trip. (Photo by Jackson Harris ’20)
The symposium will also feature a panel discussion titled, “Hydropower: Climate Solution and Conservation Challenge” featuring Amy Singler from the river conservation group American Rivers; Scott Hall, president of Great River Hydro; and Frank Magilligan, a geography professor and the Frank J. Reagan ’09 Chair of Policy Studies, whose research focuses on the effect of dams on geography and the environment. The forum will be moderated by Dan Reicher ’78, a Ledyard alumnus who was part of the first expedition to navigate the entire 1,888-miles of the Rio Grande River, in 1977, and is a clean energy entrepreneur.

“I’m very excited about the symposium, given the way it brings together, in a Dartmouth way, adventure, learning, and leadership,” says Reicher, who organized the first Explorers Symposium in 2015. Reicher, the executive director of the Steyer-Taylor Center for Energy Policy and Finance at Stanford University, will moderate the hydropower panel discussion, which also has support from the Arthur L. Irving Institute for Energy and Society.

“I think this is a very timely moment for the Explorers Symposium, given the 50th anniversary of the Wild Scenic Rivers Act, the upcoming 100th anniversary of the Ledyard Canoe Club, and the second look that hydropower is getting, given its low carbon footprint, but also the challenges that it poses for conservation,” says Reicher, whose recent return voyage to the Rio Grande highlighting the potential damage of a border wall, is featured in a April 23 New Yorker  story.

Additional support for the symposium was provided by the Dartmouth Club of the Upper Valley. All events are open to the public and, except for race fees, are free to all.

A talk by James Zug ’91, author of The Life and Adventures of John Ledyard, the Man who Dreamed of Walking the World, follows a tour (from 5 p.m. to 6 p.m.) of the Rauner Special Collections Library’s display of historical artifacts and documents related to the Ledyard Canoe Club, which will celebrate its 100th anniversary in 2020.

A screening of a new film The River and the Wall about the Rio Grande river trip by the acclaimed filmmaker Ben Masters.

Saturday, April 21, 9 a.m. to 1 p.m., starts at Packard Hill Covered Bridge in Lebanon, N.H. Registration starts at 8 a.m. on the day of the race or register online at the Ledyard race website

Founded in 1963, the Mascoma Slalom is the oldest consecutively run slalom race in the country.

The symposium features stories of adventure from some of Dartmouth’s greatest explorers as well as a panel discussion on hydropower and river conservation.

The celebration features live music, food, prizes, and a raffle of whitewater gear.

An action-packed class IV creek race featuring more than 40 boaters from the Northeast. 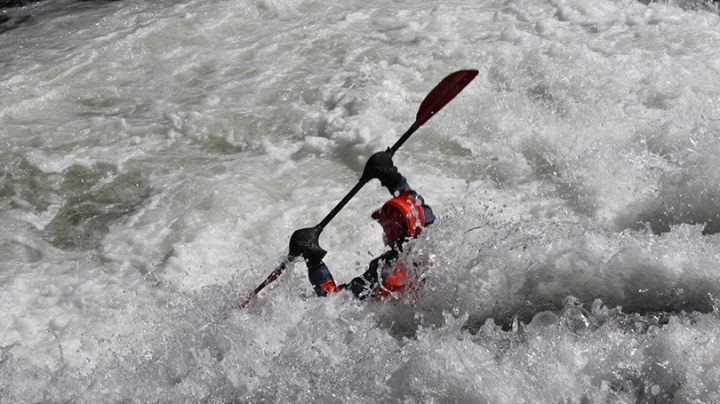 Aidan O’Day ’19 crashes through a drop in the rapids of the Upper Green River in North Carolina. (Photo by Jackson Harris ’20)
Written by
Bill Platt
Share this
FacebookTwitterEmail
Articles