Michelle Warren, Sienna Craig, and John Heginbotham are among 175 winners this year. 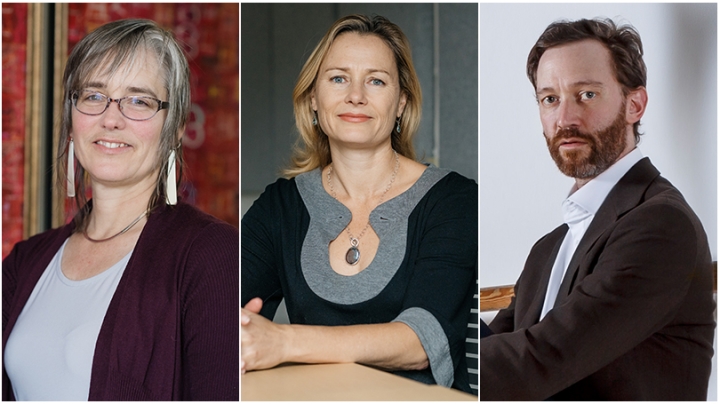 Michelle Warren, a professor of comparative literature, Sienna Craig, an associate professor of anthropology, and choreographer John Heginbotham, a lecturer in theater and director of the Dartmouth Dance Ensemble, have been awarded fellowships from the John Simon Guggenheim Memorial Foundation, joining a cohort of 175 top scholars and artists selected from nearly 3,000 applicants.

“Michelle Warren, Sienna Craig, and John Heginbotham have consistently pushed the boundaries of their fields to make connections that have profound implications for scholarship and art,” says President Phil Hanlon ’77. “I’m delighted that the Guggenheim Foundation has recognized their achievements.”

Guggenheim fellowships, awarded annually to “individuals who have already demonstrated exceptional capacity for productive scholarship or exceptional creative ability in the arts,” according to the foundation’s website, are intended to encourage creative freedom in leading artists and scholars in the United States. 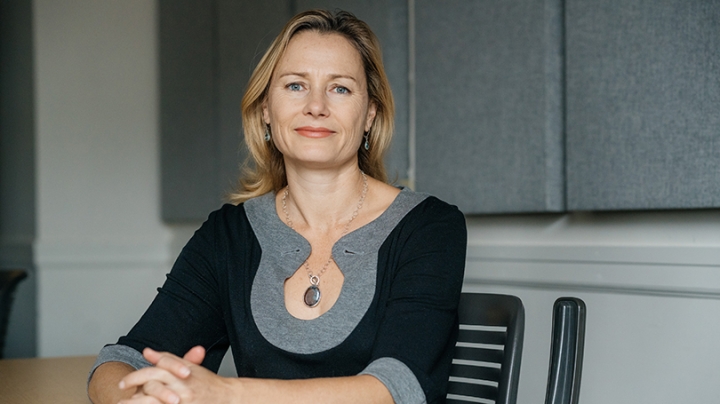 “I see the Guggenheim as a recognition of deeply creative scholarship. For me personally, it validates forms of writing and approaches to anthropology that I’ve been working toward my entire career,” says Sienna Craig.

Craig will use the fellowship to complete a book, The Ends of Kinship: Care and Belonging between Nepal and New York City, 1998-2018. This work focuses on the Himalayan region in Nepal where she has worked for the past 20 years.

“Told in relation to one small place on the global map, this project speaks to some of the most vexing and poignant issues of our times—immigration, identity, belonging, and the transformation of culture,” says Craig. “The book explores what it means for people to care for each other and steward a remote homeland across time and space, and to confront distinct forms of happiness and suffering through migration.”

During this period, she explains, two-thirds of the community’s young adults have left their villages, driven both by education and employment opportunities elsewhere. Many have settled in New York. Craig has maintained her connections to people in both locations. Her book combines traditional ethnography and short stories.

Why blend anthropology and fiction? “Sometimes it takes imagination and the creation of worlds to most clearly see social truths that emerge through long-term ethnographic practice,” she says. “Likewise, the empiricism of ethnography lends a different kind of credibility and connection to discussions of what it means to be human. As a scholar-teacher, I feel that it’s useful to put these forms of storytelling into dialogue with each other.”

Craig hopes that this book will make a scholarly impact and engage students. “But my driving motivation is to write a book that will be meaningful to the generation of young people who are growing up in New York or Kathmandu who have a connection to this part of the Himalaya, but who might not see all the different sides of the picture that, over this 20-year period, I’ve been able to begin to see,” Craig says.

Jay Hull, associate dean for the social sciences, says Craig’s project “involves the kind of impactful scholarship for which Dartmouth is known, and it is gratifying to see it be acknowledged in this way. Sienna Craig being named a Guggenheim Fellow is both exciting and well-deserved.” 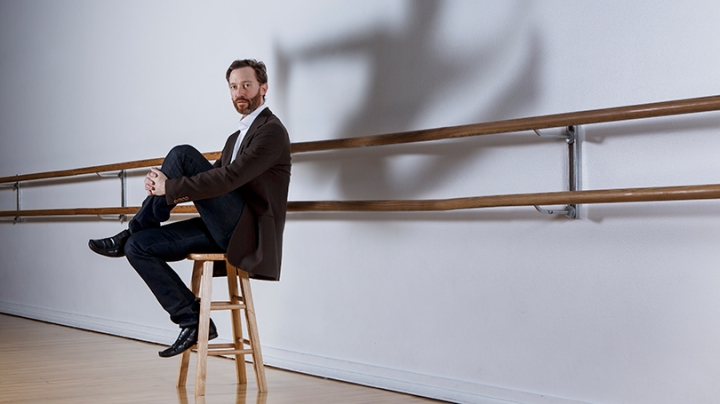 (Photo by Bud Lammars, courtesy of Lewis Center for the Arts at Princeton University)

John Heginbotham made the transition from dancer to choreographer in 2011, when he formed Dance Heginbotham, a New York-based contemporary dance company that “quickly established itself as one of the most adventurous and exciting new companies on the contemporary dance scene,” according to the company’s website.

The move followed 14 years as a member of the renowned Mark Morris Dance Group (MMDG), one of the most prominent modern dance companies in the country, with which Heginbotham performed lead roles in L’Allegro, il Penseroso, ed il Moderato, The Hard Nut, Four Saints in Three Acts, and Romeo and Juliet: On Motifs of Shakespeare.

“I naturally have been preparing myself for the afterlife of being a professional dancer and I was excited about it,” Heginbotham told The Dance Enthusiast in a video produced in 2013. “I’ve loved choreographing since I was a kid.” He goes on to say, “It’s really interesting—and weird and fun and difficult and moving—to have the primary activity in your life be making up a dance.”

In 2016, Dance Heginbotham toured in Indonesia, Laos, and the Philippines through the U.S. State Department cultural diplomacy initiative DanceMotion USASM. At the Kennedy Center in 2017, the company celebrated its fifth anniversary, premiering a work commissioned by the center and the National Symphony Orchestra and performed with violinist Joshua Bell.

“The mind of John Heginbotham is a magical place,” The New Yorker’s Andrew Boyton wrote in 2012. “He’s begun to make his mark with dance works that display an admirable combination of tight formal structure and inventive movement, bolstered by a disarming wit and strangeness.”

Heginbotham is a founding member of the artistic team of Dance for PD, an organization through which professional dancers provide dance instruction for people with Parkinson’s disease. The organization—begun in 2001 as a collaboration between MMDG and the Brooklyn Parkinson Group—has grown to include affiliates in more than 100 communities in 20 countries.

In 2012, Heginbotham joined the Dartmouth faculty as a lecturer in theater and director of the Dartmouth Dance Ensemble. Theater department chair Laura Edmondson says, “The department is thrilled and delighted about John’s Guggenheim. In addition to being a leading choreographer of contemporary dance in the U.S., he is a warm-hearted and generous teacher and colleague.”

Heginbotham has strengthened the College’s dance program, Edmondson says. “In the context of Dartmouth’s active dance culture, John’s classes in choreography and his directorship of the DDE provide those students who are genuinely interested in the discipline to grow, challenge themselves, and thrive,” she says. “His presence is a gift to our campus.” 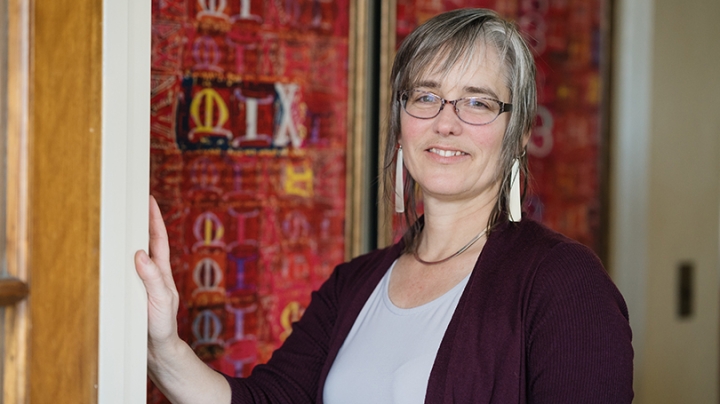 Medievalist Michelle Warren plans to use the Guggenheim to finish her third book, Lives of a Medieval Book in the Digital Dark Ages, which traces the history of a manuscript from the Middle Ages to the present.

The manuscript, a 15th-century English translation of a French text about the Holy Grail and King Arthur, was written by Henry Lovelich, a member of the Skinners’ Guild of London, an association of fur traders. The only known copy is housed in the Parker Library of Corpus Christi College at the University of Cambridge.

“There’s a whole story around corporate history, the use of books as prestige objects in urban politics, and the use of legendary narratives about Arthur as part of creating a national identity at the end of the Middle Ages and the beginning of the early modern period in England,” Warren says. “And that is a story that grows out of very tiny details left in the manuscript from which I’m building a network of connections.”

Lovelich’s manuscript has intrigued Warren since 1991, when she found a reference to the text while researching her dissertation. Though she didn’t end up using the manuscript in that project, she made a note of it, and kept returning to the questions it raised even as she wrote two other books on different topics.

“I kept circling back to this. Over the years I’ve written articles about different pieces of it,” including Lovelich’s connections to other London writers, the fur trade Lovelich was part of, and how the text, originally considered history, came to be seen as a romance—and later a “bad romance,” discredited by English literary scholars.

In 2010, the Parker Library digitized the Lovelich manuscript. “I really came back around to it with the digitization, because there was access, and I could study without traveling,” Warren said.

But the digital representation also raised new questions. “I started to be bothered by the idea of easy access, and I wanted to ask this deeper question about what digital representation is doing to the way we know history and books—what that might be doing to our understandings of the medieval past and what the repercussions are for how digital media affects our day-to-day understanding of reality,” she says.

Of receiving the Guggenheim fellowship, Warren says, “To have this kind of recognition for this project at this stage is overwhelmingly meaningful.”

Dennis Washburn, the Frank J. Guarini Associate Dean for International Studies and Interdisciplinary Programs, says, “Michelle is doing genuinely cutting-edge work, employing the latest methodologies of the digital humanities to enhance the analysis of medieval manuscripts. She is a deserving recipient of this prestigious award.”

Charlotte Bacon is associate director of the College’s Grant Proposal Support Initiative (GrantGPS), a program that provides grant-writing support for Dartmouth scholars in all disciplines.

She says, “It is a privilege to connect with such brilliant thinkers and see their ideas evolve across each draft. The work is highly creative and often yields more than a grant—ideas for books, new directions in research, or fresh collaborations also develop through this process.”

Bacon encourages all faculty interested in applying for grants and fellowships, including the Guggenheim, to contact the GrantGPS office.

President Hanlon, who received a Guggenheim fellowship in 1992, is a member of the John Simon Guggenheim Memorial Foundation’s educational board.

Description
Professor of Anthropology Jesse Casana says Gaziantep, the Turkish city badly damaged by earthquakes this week, has “a very long, complicated history” and is “a dynamic place with a very rich history.”
The New York Times
Quoted
Quote