The cellist, a Montgomery Fellow, drew a large crowd to his lecture at the Hop. 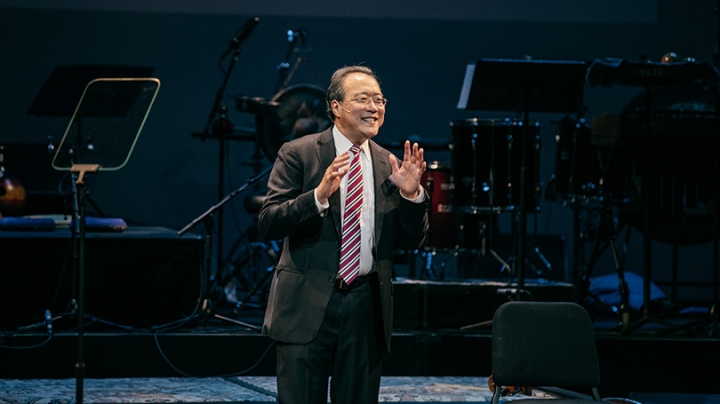 Yo-Yo Ma talked about the intersection of culture, economics, and politics last week at the Hopkins Center for the Arts. (Photo by Robert Gill)
4/09/2018
Body

Nearly 900 people gathered in Spaulding Auditorium last week to hear celebrated cellist and 16-time Grammy winner Yo-Yo Ma talk about “Culture, Understanding, and Survival.” In residence this spring as a Montgomery Fellow, Ma began by thanking Theodore Levin, the Arthur R. Virgin Professor of Music, for helping him form the Silkroad Ensemble, a group of musicians from Central and East Asia and the West who create new music rooted in tradition.

Invention, Ma said, blends analytical and intuitional thinking. “No one does that better than Bach,” he said before he played two short works by the Baroque composer. Projected on a screen were Ma’s hand-drawn diagrams showing how low notes and high notes suggest, respectively, “struggle and burden.” The high notes, he said, rise from the “gravitational downward pull” of lower notes, bringing hope into the music. “It’s a compositional miracle,” he said.

Ma said that as a young musician—he started playing the cello at 4—he worried too much about perfection, at the expense of emotion. Now, he says, he lives and works by a dictum borrowed from another famous cellist, Pablo Casals, who described himself as “a human being first, a musician second, and a cellist third.”

Ma spoke about the intersection of culture, economics, and politics, worrying that the social triad is being torn apart in a world fractured by dissent. The survival of our civilization, he said, depends on whether people can integrate “edge” ideas into the mainstream.

“We need edge-center oscillation,” he said. “If you’re in the center, make sure you’re open to ideas from the edge, and do that all the time.” Only then, he said, “can we turn the other into us.”

Ma’s talk was followed the next day by a sold-out performance by the Silkroad ensemble at the Hopkins Center for the Arts. Silkroad members had spent part of the week visiting College classes. The program included the world premiere of a work by Jia Daqun, one of China’s leading composers, commissioned by the Hopkins Center, which co-sponsored and produced Ma’s Montgomery visit, residency, and performance.