William Sandlund ’18 and Rae Winborn ’14 will study in Beijing next year. 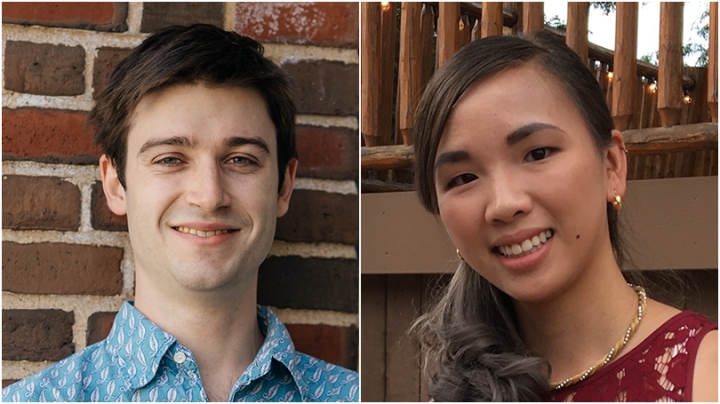 The competitive English-language program combines humanities and social sciences “to incorporate the diverse backgrounds and experiences of program participants into the study of ancient, modern, and contemporary China, effectively acting as an incubator for innovative approaches to past, present, and future Chinese transformations,” according to the Yenching Academy website.

Sandlund and Winborn will join a cohort of approximately 120 students from more than 60 countries who will pursue master’s degrees in Chinese studies. Sandlund plans to concentrate in Chinese law and society, while Winborn will focus on economics and management.

For more information about applying for the Yenching Scholarship and other international and national programs, visit Dartmouth’s Office of Fellowship Advising.

“This is a unique opportunity to learn about Chinese law,” says Billy Sandlund, a history major and Chinese minor. “It’s exciting—I’m getting to be a student for the next year.”

Sandlund’s interest in China comes from his experiences growing up in Singapore. “Singapore is nearly 80 percent ethnic Chinese. You can’t understand it without understanding Chinese history and culture. So it was natural to me to try to understand that as a kid.”

His sophomore year, he took a course on East Asian intellectual history with Pamela Crossley, the Charles and Elfriede Collis Professor of History and a professor of Asian and Middle Eastern studies. “It was formative. It changed the way I thought about ideas, as well as myself,” Sandlund says.

As a presidential scholar, Sandlund served as a research assistant for Crossley, helping to compile a bibliography of the High Qing era. “Professor Crossley has been a great mentor. She has a no-nonsense approach, but she appreciates hard work and she has encouraged me to be a rigorous scholar,” Sandlund says.

Sandlund is writing a thesis on the history of Chinese advertising in the early 20th century. He is examining how -era advertisers during the Republican era between the fall of the Ching Dynasty and the Communist Revolution used gendered images of suicide to sell, among other things, Chinese-made products like silk and tobacco, pesticides, and treatments for sexually transmitted diseases.

“You have this anxiety over foreign incursion, mainly from Japan, that gets articulated in the copy of these advertisements, describing the nation becoming weak and exposed, and they incorporate patriarchal ideas of gender into that,” Sandlund says. “The weakness becomes sort of feminine, and it is used to heighten the fear. All of those subconscious concerns are articulated in a product.”

At Dartmouth, Sandlund has participated in foreign study programs in Beijing and London and was a columnist and cartoonist for The Dartmouth.

He’s also taken advantage of Dartmouth’s broad liberal arts experience, taking classes, from filmmaking to game theory to computer science, that he describes as “out of my comfort zone.”

Sandlund says part the value of being exposed to different systems for thinking is that it helps you “appreciate what you’re good at. But also, when you take a class that’s extremely logic-based, you can feel yourself thinking differently by the end of the term. You start trying to use some of these skills you learned to analyze problems. It’s fun.”

Sandlund hopes the Yenching program will help him clarify his career goals. “I’ve been considering journalism and academia, as well as law,” he says.

Crossley says, “Billy’s acceptance to the truly international, innovative program at Yenching Academy shows what happens when our undergraduates make a mature application of their language skills in research and writing. The program will set him up to pursue any of a variety of professional paths.”

For Rae Winborn, a double major in government and Asian and Middle Eastern studies from Durango, Colo., the Yenching Scholarship is an opportunity to study Chinese private equity and social impact investing in China—an area in which has she has gained expertise as a manager at the Emerging Markets Private Equity Association (EMPEA) in Washington, D.C., where she is responsible for the China data and research program.

“I wanted to study this topic further, as well as be on the ground where it is all happening,” she says.

Peking University helped bring the concept of social enterprise investing to China, she says. “I hope to leverage a lot of the university’s great resources. The Yenching gives me the structure to study economics and business management in China, while also giving me the flexibility to conduct my own research.”

Winborn started at Dartmouth envisioning a career in an international NGO. But a sophomore year internship at an orphanage in Jiaozuo, China—supported through a Center for Social Impact fellowship—“opened my eyes to some of the inefficiencies of working via only a nonprofit model to create social change. That led to my exploration of the private sector as a tool for impact.”

She took undergraduate business classes and a course on human-centered design, and interned for a summer at New Sector Alliance, consulting for a nonprofit. After graduating, she spent six months working for a social enterprise in India. In 2015 she returned to the U.S. to join EMPEA.

The scholarship will also allow Winborn to continue the exploration of her own Chinese heritage that she began at Dartmouth. “As a Chinese adoptee growing up in rural Colorado, Dartmouth was really my first opportunity to explore my heritage. As I learned more about China, my personal interest became professional as well,” she says. “I took Chinese classes and became an AMES major, was president of the Dartmouth Chinese Culture Society, lived in China for six months, lived at the Chinese Language House, and wrote my thesis on Chinese adoptee racial and ethnic identity.”

Her other home on campus was the Dartmouth Wind Ensemble, for which she played saxophone. “It really developed into a family for me,” she says.

“I couldn’t think of a more deserving student than Rae to receive the Yenching Scholarship,” says Emily Walton, an assistant professor of sociology. “As an adviser for her senior thesis on Chinese adoptee identity, I often found her to be more of a conversation partner than a student. The final product was emblematic of the deep thinking and analytic rigor with which she approached her research questions.”

Of receiving the scholarship, Winborn says, “It’s a great opportunity and I’m honored to be accepted. I’m ecstatic to be able to return to China and through such a unique program.”