Class Explores the Connecticut River Valley and Its People 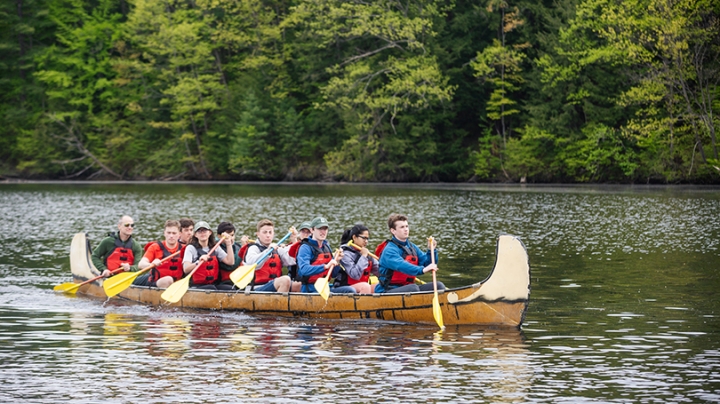 The students in Kenneth Bauer’s “Conservation and Development” anthropology class set out in three 10-person voyageur canoes from the Ledyard Canoe Club recently for an exploration of the culture and people of the Connecticut River watershed.

During their Saturday on the river, the students observed land-use practices and fishing and boating activities and toured the Town of Hanover wastewater treatment facility with the facility manager Kevin MacLean. Then the group canoed downriver to Kilowatt Park in Hartford, Vt., where they landed and walked to a viewing platform over the Wilder Dam.

The trip was part of a social impact practicum project in Bauer’s anthropology class. The students are using ethnographic methods to understand the perspectives of Connecticut River stakeholders—landowners, farmers, recreational users, local and state governments, conservation organizations, members of the Abenaki tribe, and dam operators—and compiling a profile for the Connecticut River Conservancy. The goal is to inform public discussion in the run-up to the relicensing of three dams under the new ownership of Great River Hydro. At the end of the term, Bauer’s class hosted a forum where the various interest groups shared their views on the future of the Connecticut River. 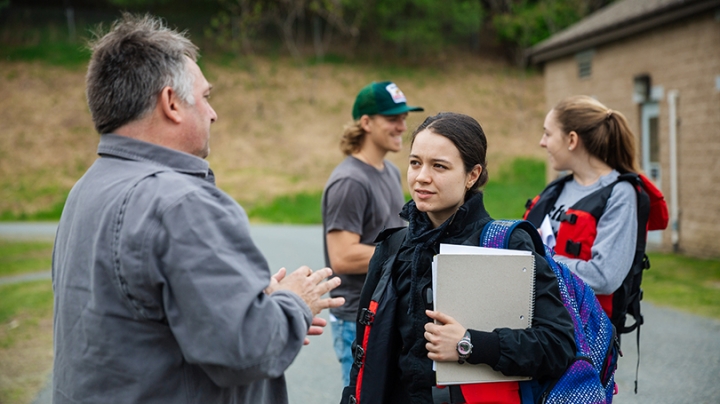 Anthropology student Anela Arifi ’20 talks with Kevin MacLean, manager of the Hanover Wastewater Treatment Facility, during a stop on a class canoe trip on the Connecticut River. (Photos by Kevin Yang ’20)

Sponsored by the Center for Social Impact, social impact practicums are project-based experiential learning opportunities that connect undergraduate courses at Dartmouth with community needs identified by nonprofit organizations throughout the Upper Valley.

Bauer, a senior lecturer in anthropology and program manager in human development at the John Sloan Dickey Center for International Understanding, says the project provided his students an opportunity to take anthropological methods learned in the classroom—such as systematic observation and interviews of participants to understand the norms, values, and worldviews of diverse cultural groups—and put them into practice in their own community.

Lindsey Renner ’19 was in the group that interviewed farmers. When the students in her group first made contact with the farmers they were planning to work with, they quickly realized that different worldviews have to be taken into consideration even in the most basic communications.

“The first round of emails we were getting back said, ‘Can we please meet within the next week because after that we’re going into harvesting and we’ll be working from sunup to sundown,’ ” Renner says. “We were trying to lock down a time to meet with this one farmer in particular and he said, ‘Come sometime around dinner on Friday, I’ll be here.’ I was thinking, should I confirm that I will be there at seven? Five?”

Mustafa Nasir-Moin ’20 was in the group researching the positions of dam operator Great River Hydro. Their work was complicated by the fact that the company chose not to participate. Representing the views of a “silent stakeholder” is a real-world problem in anthropology, Nasir-Moin says, but it is essential to the process that all sides get a voice. To gain insight, the group spoke to other dam operators who are not directly involved in the licensing project under consideration, and researched Great River Hydro’s corporate policies, as well.

“There’s a perception among community members and other stakeholders that the dam operators are solely out for profit and don’t care about conservation, but from the people we’ve talked to and in looking over company policies, we find that they do value conservation and they have a culture that values the community,” Nasir-Moin says. “However, they do have to make a profit, so it’s a matter of compromise.”

During a recent class, Bauer noted that the students were doing a good job of incorporating the views of the people they are studying into their own comments.

And the methods themselves, like observation, interviews, and focus groups, lead to a better understanding of how people feel about complex social and political issues such as land use, conservation, and development, he says.

Throughout the course, Bauer asked his students to think about how their readings in historic and contemporary anthropological theory and methods applied to the Connecticut River interest groups they were working with as part of the social impact practicum.

“Today we were talking about Papua New Guinea and one of the students said, ‘What blows my mind is we were talking to a farmer on the Connecticut River and he was saying almost the same thing that this villager in Papua New Guinea said,’ ” Bauer says. “The farmer was saying his grandfather was buried up on the hill, he gets his chickens from a neighbor, he’s always farmed this piece of land, and along comes the government and wants to regulate how he uses it.”

The Connecticut River Conservancy project forum and canoe trip were supported by the Center for Social Impact and the Department of Anthropology.