Organizers say the region’s culture would be ruined by oil and gas extraction. 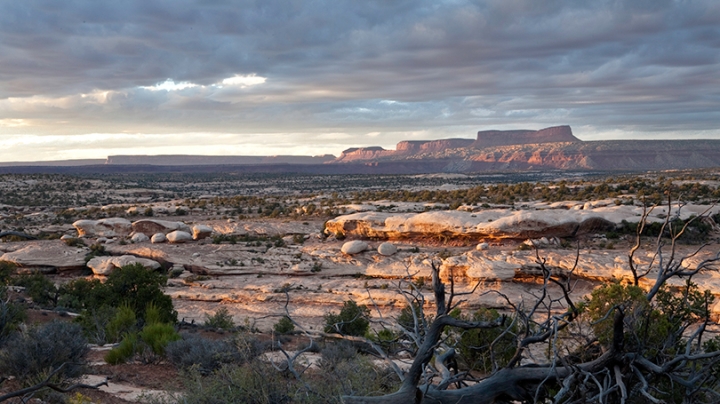 Bears Ears National Monument, a 1.35 million-acre area of red rock canyons with oil and natural gas deposits in southeastern Utah, has been decreased by the Trump administration to about 200,000 acres. (Photo by Bob Wick)
5/01/2018
Body

On May 4 and 5, students from Dartmouth’s chapter of the American Indian Science and Engineering Society will hold a conference to raise awareness about the future of the Bears Ears National Monument, a 1.35 million-acre area of red rock canyons with oil and natural gas deposits in southeastern Utah.

President Barack Obama established the monument in December 2016. A year later, President Donald Trump shrank the size of the federally protected region to about 200,000 acres, a reduction of 85 percent.

While President Trump defends the boundary change as a necessary reversal of federal overreach, and Interior Secretary Ryan Zinke denies that the change is related to the potential for oil and gas production, opponents of the move believe otherwise. Documents recently obtained by The New York Times suggest that “oil was central to the decision to shrink the monument.”

Thirty Native American tribes have expressed strong opposition to what they consider an unlawful infringement of their sovereign rights to the land, including thousands of archeological sites.

Dartmouth organizers say they are holding the conference to recognize grassroots movements to preserve the cultural, historical, and scientific significance of Bears Ears. According to its website, the Bears Ears Inter-Tribal Coalition was formed in 2015 by leaders of five tribes: Hopi, Navajo Nation, Ute Mountain Ute Tribe, Pueblo of Zuni, and Ute Indian Tribe, “representing an historic consortium of sovereign tribal nations united in the effort to conserve the Bear Ears cultural landscape.” In March, the consortium issued a joint press release condemning the Trump administration’s motives for decreasing the monument’s size.

Guest speakers at the conference will include Regina Whiteskunk, former co-chair of the Bear Ears Inter-Tribal Coalition; Ethel Branch, attorney general of the Navajo Nation; Angelo Baca, a filmmaker and a member of the Utah Dine Bikeyah; Tara Benally, a board member of Utah Dine Bikeyah; Ryan Beam of the Arizona-based Center for Biological Diversity; and Noah Schlager, a graduate student at Yale’s School of Forestry and Environmental Studies.

Shelby Snyder ’21, secretary of AISES, says the issue is important to her because “the Bears Ears National monument is not that far from home. It is an issue that affects my community, the Navajo Nation, and Indian Country as a whole. The issue lies in societal understandings of Indigenous relationships to land and sacred sites. In general, people do not have much exposure to Native American issues or knowledge. This conference hopes to address that gap and provides a space for Indigenous peoples on campus.”

Charlotte Albright can be reached at charlotte.e.albright@dartmouth.edu..