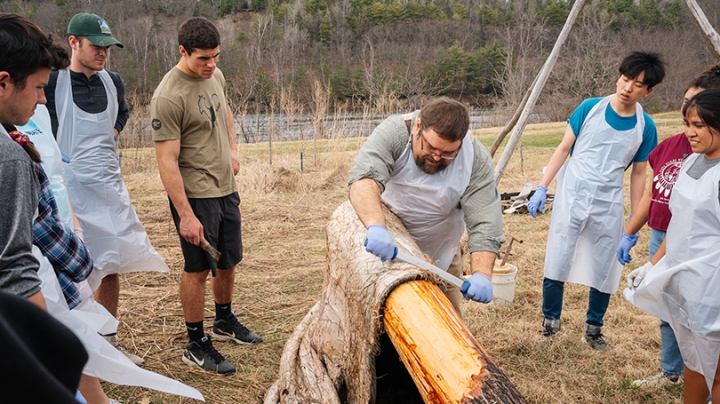 Art Hanchett, center, demonstrates how to process a moose hide in an “Encountering Forests” lab. (Photo by Eli Burakian ’00)
5/17/2018
Body

On a chilly gray spring afternoon, about a dozen students stand in a circle along the banks of the Connecticut River at the College’s organic farm. In the middle of the circle, a moose hide, still covered in fur, is draped over a makeshift sawhorse.

This is an outdoor classroom for a course called “Encountering Forests,” taught by Nicholas Reo, assistant professor of environmental studies and Native American Studies. Reo has invited Art Hanchett, a staffer in Dartmouth’s Controller’s office who is also an experienced hunter, to share his knowledge of the woods and demonstrate how to use two-handled blades to remove the moose’s fur. The students will eventually use part of the hide to make the head of a ceremonial drum.

A member of the Sault Ste. Marie Chippewa Tribe, Reo says he’s thankful for the moose hide, which was given to him by a friend. Taking a match to a cluster of sage leaves in a small smudge pot he holds in his hand, Reo tells the class, “This is sage from the Great Lakes that I use in my life. It’s a powerful medicine, and one of the things it does is spiritual cleansing. It will cleanse an area or people or beings. I’ll start by smudging the moose and then I can come around. If you want the cleansing smoke to go over you and around you, you can bring that toward you with your hands. But you don’t have to do that.”

After the smudge pot ritual, Reo beats a small hand drum and sings a ceremonial song in his native language. Then, guided by Hanchett, students take turns scraping the hide.

In this class, Reo says, “we are connecting with the land. We are trying to talk about peoples’ connections to forests and other types of lands—indigenous peoples, because this is a Native American Studies class—but also other peoples.” To process a hide, he says, is “really special, and has to be done in a good way.”

Students in this course learn about the flora as well as the fauna of the forest. Later this month the class will talk about forest management and invasive species, and look at the emerald ash borer outbreak near Corinth, Vt. Another outdoor lab will be devoted to harvesting and processing an ash tree with Passamaquoddy basket-maker Geo Neptune ’10.

For Jennie Harlan ’20, from Sedona, Ariz., “Encountering Forests” has opened a window on an environment unlike the one she comes from.

“I’m enrolled in the Yavapai-Apache Nation,” she says. “My people are linked to the desert, so this is a whole new learning experience for me. I feel that Native American studies and environmental studies go hand-in-hand. They complement each other, and I am hoping my major will encompass both of those fields.”

At the moose workshop, Harlan says she was pleased that the animal was treated as a precious gift from nature.

“Smudging the sage, that was a way to take back our culture, and to make that cultural knowledge available to others. There are other ways to tan a hide, but it’s important for people to realize there are protocols and ways you can go about these things,” she said. “Hands-on courses like this at Dartmouth, on an organic farm—that’s not an opportunity many other schools provide.”