In ‘Citrus,’ Celeste Jennings ’18 connects generations of women on the stage. 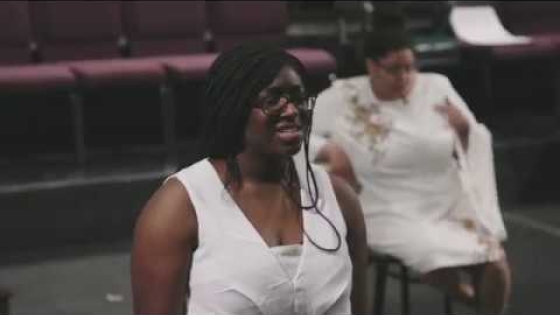 —from Citrus, by Celeste Jennings ’18

The inextinguishable link between mother and daughter across generations is at the heart of Citrus, a play written by Celeste Jennings ’18 as a Senior Fellowship project this year. The production, for which Jennings also designed the costumes, uses dress, dance, and poetry to connect the joys, sorrows, resilience, and the humor of black women from the 19th century to the present. The show played to packed audiences last weekend in the Warner Bentley Theater at the Hopkins Center for the Arts.

Citrus is a choreopoem—that is, it combines spoken-word poetry and movement in the style of Ntozake Shange’s classic For Colored Girls Who Have Considered Suicide When the Rainbow Is Enuf. The project was directly inspired by a Dartmouth production of For Colored Girls—the senior honors thesis of theater major  Carene Mekertichyan ’16—for which Jennings helped make costumes during her sophomore spring.

“That was my first time working with another woman of color in theater, ever,” Jennings says. “We were putting on a show that women on campus could relate to, and it was actually making a difference. I felt insanely special and honored to be a part of that.”

A member of Soul Scribes, Dartmouth’s performance poetry group, Jennings began writing the poems that became Citrus two years ago, and she received the Senior Fellowship—awarded to seniors for projects that go beyond what’s offered through a traditional major—to immerse herself in the project instead of taking classes this year.

Through the fellowship and the support of the Department of Theater, she spent months researching, writing, designing, and sewing. To bring Citrus to the stage, she collaborated with a student cast of nine women and a student stage crew; her adviser, Associate Professor of Theater Laurie Churba, whom she considers a mentor; and guest director JaMeeka Holloway-Burrell, founder and artistic director of the Black Ops Theater Company based in Durham, N.C.

Jennings first taught herself to sew when she was in the eighth grade. By the time she started college, she was planning a career as “a sustainable fashion designer,” and naturally gravitated to the costume shop at the Hop.

“I just fell in love with the people in the shop. They were teaching me so much. I was finally figuring out the technical terms, and what stitches to use when, and special scissors—everything I didn’t know when I taught myself how to sew,” she says.

A theater course on costume design, taught by Churba, gave her the chance to design her first costume for a student production. “It was just a white dress—we literally found it at JC Penney, and then I made a bow. That’s it. But I was so excited. Ever since then, I’ve been passionate about being a costume designer.”

What Jennings enjoys most about costume design is uncovering the context behind each character’s outfit. “It is so much more than just saying, ‘I want someone to look good,’” she says. “You get to do so much research. What time period is it? What music was popular? What’s their social background? What’s their race? What’s their ethnicity? How old are they? And you put all this information into a shirt, which sounds silly, but I just love it.”

Not surprisingly, costumes take center stage in Citrus. Throughout the performance, each actor changes several times, all in view of the audience. The outfits allow the actors to embody roles African American women have inhabited across decades—including styles worn by the Little Rock Nine students who integrated Alabama schools in the 1950s, enslaved field workers, activists from the 1960s to the present, hip-hop artists, and more.

The period costumes help connect Jennings to where she came from. “When I think about who I am and who I want to be, I can’t help but think about all the women before me,” she says.

Though theater is not her official major, Jennings says she owes a debt of gratitude to the department. “I wouldn’t be able to do anything that I’ve done—I wouldn’t have this fellowship—if it weren’t for the amazing professors of the theater department. I’ve received relentless support from them. I’ve been so lucky to be a part of it.”

The theater department is presenting four other student productions this term, all senior honors theses, some of which have taken place. The projects include: