The challenge gift could bring total support to $10 million. 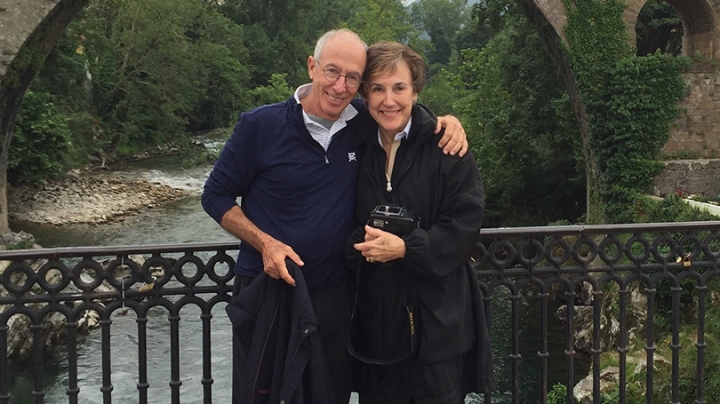 Karen and James S. “Jim” Frank ’65, and their two sons, Daniel ’92 and Jordan ’94, have committed $5 million to establish a scholarship fund that will help ensure that every Dartmouth undergraduate can participate in a foreign study program, President Phil Hanlon ’77 announced Monday.

The Franks also have made an additional $2.5 million, dollar-for-dollar challenge to the Dartmouth community to further support foreign study. If the challenge is fully matched, scholarship funds for this purpose would total $10 million.

“This gift will help provide all of our students with the global perspective and cultural humility so powerfully informed through study abroad,” said President Hanlon. “Students are transformed by their off-campus cultural experiences, and they share what they’ve learned with our community back at Dartmouth. We are deeply grateful to the Franks for making this experience more accessible for students.”

Also on Monday, Dartmouth announced a major initiative to eliminate loans from its financial aid packages.

The commitment from the Franks will allow Dartmouth to build on its historic strength in foreign study by making it more widely available. Dozens of students in every class are unable to afford the additional cost of foreign study, and therefore miss out on the experience.

The Franks’ gift will help eliminate this barrier, ensuring that the full Dartmouth experience is open and accessible to every Dartmouth student—including the integration of course study and experiential learning at universities and programs around the world.

“Dartmouth made a powerful impression on me as a student,” said Jim Frank, who studied abroad in Spain in 1963. “Karen and I wanted to give back so that students could enjoy the same incredible learning experiences that I enjoyed.”

Frank recalled how he lived with a low-income family in a small apartment in Salamanca. One of the brothers in the family had just finished medical school, and Frank stayed with him while the brother trained as a doctor in a small farming community.

“Living with him, I learned different values and new ways of looking at the world; prosperity had a different meaning than our impression of it in the United States,” Frank said. “Given this experience of mine, it made sense for us to support foreign study at Dartmouth so that all students can benefit.”

Dartmouth has long been at the forefront of global education, dating back to the administration of President John Sloan Dickey and his creation of the Great Issues course in 1947 to introduce students to topics of international consequence.

Formal foreign study began at Dartmouth in 1958, when two students enrolled for a year at the University of Madrid, Spain, under the direction of Professor of Romance Languages and Literature Robert Russell. In 1967, John Rassias, the William R. Kenan Professor of French and Italian, introduced the Language Study Abroad (LSA) program with a session in Bourges, France.

Today, Dartmouth ranks first among Ivy League institutions for study abroad participation, with 55 percent of Dartmouth undergraduates engaging in more than 40 off-campus programs in 29 countries. The D-Plan is well suited for off-campus and international programs, giving students a rich array of choices four terms a year. Individual faculty design and lead the programs onsite, often serving as mentors to their students.

Jim Frank serves as chief executive officer and president of Frank Consolidated Enterprises and executive chair of the board for Wheels, Inc., an auto-leasing firm cofounded by his late father, Zollie Frank. He has also served as president and chair of the American Automobile Leasing Association.