Hood Staff Move Into Their New Digs at the Museum

The museum opens in January, but the staff are settling in to new third-floor offices. 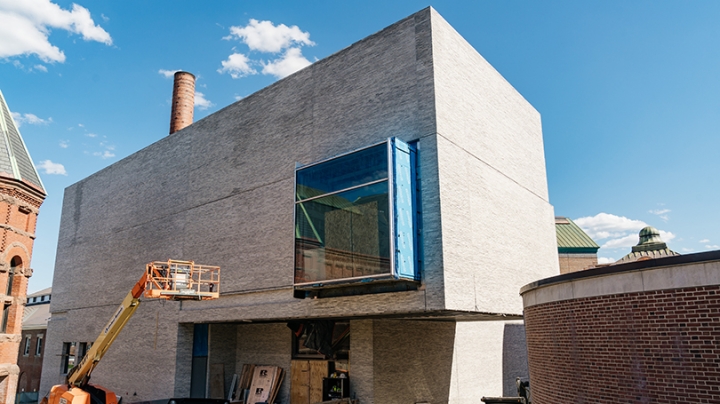 Progress: In recent weeks, the tarps and scaffolding have come down to reveal the Hood Museum’s new façade. (Photo by Eli Burakian ’00)
5/16/2018
Body

In recent weeks, you may have noticed some dramatic changes to the exterior of the Hood Museum of Art, which is two years into a major renovation and expansion project designed by architects Tod Williams and Billie Tsien.

The Hood is slated to reopen Jan. 26, 2019, but already the tarps and scaffolding that covered the facade have come down, revealing the expanded museum’s white-gray brickwork and its signature vitrine window. In coming weeks, landscapers will sculpt the plaza and walkways leading into the grand atrium, which will be the new gateway to the museum’s collections.

Changes are happening on the inside, too. Drywall is up, paint colors are being selected, carpets are being laid, wood floors are being finished. The museum’s 16 galleries are almost ready to begin receiving art.

Another significant transformation: the presence, at last, of the museum’s two dozen staff members. Earlier this month, the Hood staff moved from their temporary headquarters in Lebanon to their new offices on the third floor of the Hood—a light-filled, versatile suite that combines private offices with open workspaces.

John Stomberg, the Virginia Rice Kelsey 1961s Director of the Hood, describes the staff’s experience of their new home in a word: “buoyant.”

“Since the moment we moved in, there’s been a level of excitement,” Stomberg says. “It feels to me that we are now really on the adventure—like, here we go, we are opening a museum. This is happening.”

He points out the line of skylights over central cubicles where the Hood’s undergraduate interns will eventually work; the large conference room and casual, couch-furnished meeting space adjacent to a communal kitchen; and the offices designed with interior windows and glass doors facing the center.

Alison Palizzolo, the Hood’s public relations coordinator, says the staff is glad to be back in the heart of campus. Being off-site for so long made engaging with colleagues on campus more challenging, she says. “It’s nice to back for that purpose alone. It feels really great.”

The Hood’s newest staff member, Associate Curator of Native American Art Jami Powell, says she appreciates the office suite’s brightness and spacious layout. “I think the space will facilitate the kind of collaborative work that the Hood is known for,” she says.

Patrick Dunfey, head of exhibitions design and planning, says the team is already hard at work designing labels and other signage for the museum’s 16 galleries. “We’ve rethought everything: how the labels will look, how a visitor might encounter text on the walls, how a pattern will be set up from one gallery to the next gallery, almost like chapters. We’re treating it all as one text, one installation.”

This work is part of a long process of reimaging the museum. “Since June 2016, a group of about 12 people have been meeting every Tuesday to rethink and argue about and come together for an informal symposium on what the new museum could be,” Stomberg says. Those meetings have helped the museum refocus on the Hood’s strengths, including, he says, an extensive collection of global contemporary art.

The process also revealed what Stomberg calls “a real appetite to present the unfamiliar. We want visitors to come through the museum and say, ‘Wow, I’ve never seen that artist before, or I’ve never seen something that looks like that by that artist.’ Hopefully there will be a lot of surprises along with the established artists.”

Soon, artwork will begin to be installed in the galleries, starting with the Space for Dialogue gallery—a student-curated space that will, when the museum first opens, showcase artworks selected for purchase by students in the Hood’s “Museum Collecting 101” class.

“Hanging that first work is going to really be something, because for so long it’s been a building site,” Dunfey says. “Everyone is really ready to start bringing artwork up to galleries, unpacking it, and saying this is our zone now—we’ve taken possession fully of the building.”

Stomberg says it will take the team approximately two weeks to hang the art in each gallery. “With 16 galleries, that’s going to take us right up through December,” he says.

The Hood Downtown gallery on Main Street, which by September will have hosted eight exhibitions, will close on Labor Day to allow the museum staff to focus intensively on preparing the museum for opening day. But Stomberg hopes the community spirit embodied by the temporary street-level gallery will carry over into the new Hood.