In May and June, Burkot will conduct his last two concerts as director of the student chorus. 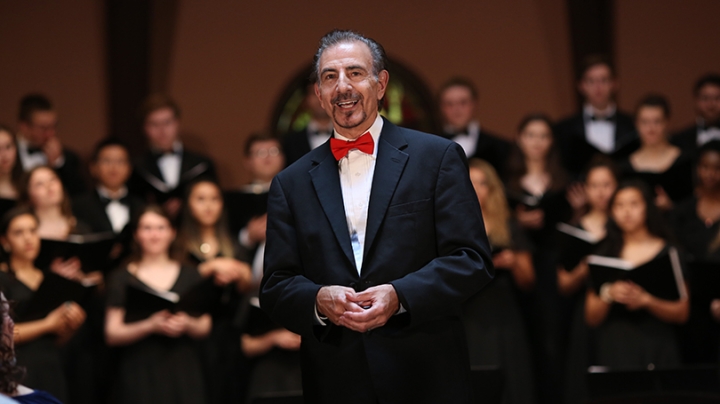 A concert at 2 p.m. Sunday, May 6, in Spaulding Auditorium at the Hopkins Center for the Arts, centers on Gabriel Fauré’s Requiem in D minor—a signature work during Burkot’s decades at the Glee Club’s helm—as well as a host of traditional Glee Club favorites, including Sergei Rachmaninoff’s Bogoroditsye Devo, a selection by legendary African American composer Moses Hogan, and some of Dartmouth’s traditional songs.

The performance will be followed by a public reception, with refreshments, in the Top of the Hop. Then, on Friday, June 8, at 9:30 pm, Burkot will lead the chorus in its traditional commencement concert, also in Spaulding, performing Dartmouth songs. The concert will also include a movement from the oratorio Repast, a version of which the Glee Club commissioned and premiered in 2016.

Burkot will continue to teach in the Department of Music and, outside of Dartmouth, will continue to serve as artistic director of Lebanon, N.H.-based Opera North, a position he has held since 1987.

Burkot’s influence on Dartmouth and the region has been profound, says Dartmouth Symphony Orchestra conductor Filippo Ciabatti, who has collaborated with Burkot through Opera North and as a fellow Hop artist. “I met Louis Burkot for the first time in Chicago three years ago, as I was auditioning to be a pianist and an assistant conductor for Opera North. I am very grateful to him, as he believed in my abilities from the very beginning, and introduced me to the Upper Valley, which would become my new home.

“Louis’ expertise in vocal and choral music have contributed significantly to the Dartmouth community and beyond. The Glee Club that he has built over many years is known for its rich and expressive sound, and it has offered many wonderful concerts. Louis’ knowledge of vocal and operatic music has been invaluable for many young singers, who are now having major careers around the world. The DSO and I wish him the best for his retirement, knowing that he will continue to inspire and offer his expertise to generations of young artists.”

In notes for the playbill for the May concert, Burkot calls his years with the Glee Club “the defining experience of my artistic life.” He writes, “As a high school and collegiate choral singer, my musical imagination was formed, and I found myself drawn to this complex art form as defined by the many wonderful composers who write for ensemble singers. Each year with the Glee Club has brought exciting challenges, but the talent, the dedication, and the energy that the students of Dartmouth have given so generously constantly renews my passion for finding the truth in both traditional and new choral works. The legendary generosity of the body of Dartmouth alumni—who have given so much to each successive generation of Dartmouth students—is profound, and their part in the success of the Glee Club is immeasurable.

“Lastly, I am grateful to both the directorate and staff of the Hopkins Center, and faculty and staff of the Department of Music for their support of the work of the Glee Club, and I look forward to following the many future successes of the group.”

Burkot came to Dartmouth in 1981 with a BA from the University of Virginia and a master’s in music from Yale University. He also had studied conducting at the Aspen Music Festival and the Houston Grand Opera. In addition to leading the Glee Club, he has taught voice students and courses in the Department of Music, receiving the Dartmouth Distinguished Lecturer award in the spring of 2000.

He built a musical life outside of Dartmouth, as well, leading the auditioned Upper Valley chorus Bel Canto from 1982 to 1987, and serving as artistic director of Opera North from 1987 to the present. During those years he conducted more than 35 productions for Opera North and engineered its evolution from a locally known group of talented amateurs to a full-fledged professional company and sought-after training program for young artists. Burkot has served as music director of Opera New England and on the faculty of both the Westchester Summer Vocal Institute at Sarah Lawrence College and the Atlanta Academy of Vocal Arts. He gives master classes in vocal repertoire at music schools and conservatories throughout the United States.

Richard Dyer of The Boston Globe has praised his conducting as “first-rate, capable, and stylish,” and Opera News magazine says his conducting “sparkles with verve and sensitivity to the needs of singers.”

Gwen Noone ’87 sang with the Glee Club during her four years at Dartmouth. “My years in the Glee Club under Louis informed my teaching in so many ways, the interweaving of good vocal technique, how to run a rehearsal, how to approach the teaching of a choral arrangement,” Noone said in an email. “He had a very disciplined approach, focused on the fundamentals of singing and the voice, and everyone in the group, regardless of where they started, became a better singer.”

Nathaniel Graves ’13 sang with the Glee Club all through college as well as two years after graduation. Graves said he felt nurtured by Burkot as an artist and person, in both the Glee Club and individual voice lessons. “I learned to specifically home in on vocal skill sets and musical awareness as a solo artist and concert musician. His lessons flow and guide me to this day as I pursue medicine and music as my career as one and pursue life as a loving, living being.”

The Dartmouth College Glee Club is a group of 40-some serious choral singers. Its ever-increasing repertory spans four centuries, with a distinguished performance history including many of the masterworks of choral-orchestral literature, fully staged Gilbert and Sullivan operettas with all-student casts, large and small a cappella works, and the cherished songs of Dartmouth College. Recent concerts have included a fully staged and choreographed performance of Leonard Bernstein’s opera Candide and a program of festive English madrigals from the 16th and 17th centuries coupled with courtly music from Henry Purcell’s masque The Fairy Queen. In addition, the Glee Club regularly tours each spring break.