Middle Eastern and Asian Studies to Get Their Own Programs 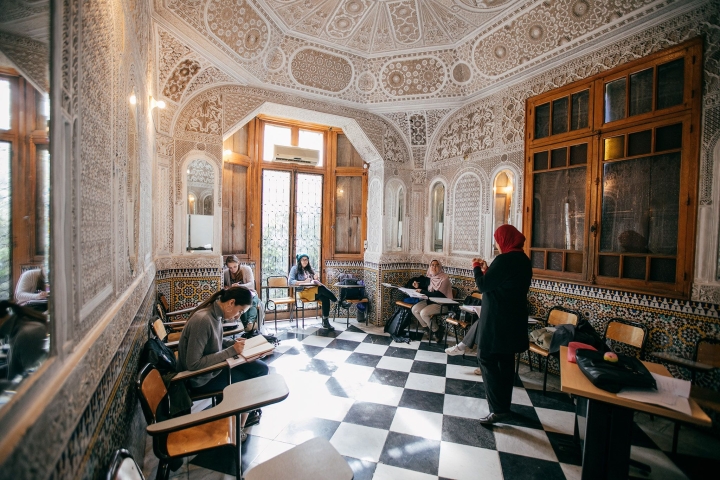 The Middle East and Asia overlap geographically, but there are stark cultural, historical, and political  differences between the two regions, says Jonathan Smolin, an associate professor of Asian and Middle Eastern languages and literatures. So Dartmouth is redrawing its curricular map to give each area its own program of study.

The change, which becomes official on July 1, goes far beyond acronyms and deeper than college governance, Smolin says. “Dartmouth is an institution of global education, making an impact on both the international and national space, and creating a generation of leaders,” Smolin says. “It cannot do so without a program in Middle Eastern Studies. Our field of study is critical to the understanding of the globe in the 21st century.”

MES, he says, will “connect with almost every other unit on campus, and those units will reach their full potential and thrive through collaboration with us.”

“These new programs will preserve what is already strong in our curriculum and make room for innovation,” says Dean of the Faculty of Arts and Sciences Elizabeth Smith.

Tarek El-Ariss, an associate professor of Middle Eastern studies who joined the faculty this academic year, is looking forward to working in the newly configured MES program. Born in Beirut, Lebanon, and educated in French schools there, he has a long list of research interests, including contemporary Arabic culture, literature, and art; new media and cyber culture; digital humanities; travel writing and the war novel; film and television studies; sci-fi and utopia studies; 18th- and 19th-century French philosophy and literature; gender and sexuality studies; and psychoanalysis, deconstruction, and affect theory.

The author of Trials of Arab Modernity: Literary Affects and the New Political, and currently editing the Arab Renaissance: A Bilingual Anthology of the Nahda, El-Ariss says the reconfigured MES program will serve Dartmouth’s educational mission. “This new program brings together humanities, social sciences, arts, and government,” he says. For example, MES may partner with the Arthur L. Irving Institute for Energy and Society to study oil use, policy, and politics.

El-Ariss plans to lead one of the College’s foreign study programs in Morocco. In the country’s capital, Rabat, he says, students will be able to study not only Arabic culture, but also Moroccan Judaism, visiting Jewish sites and synagogues. Smolin says that the close ties between Middle Eastern and Jewish Studies set Dartmouth apart from many of its peers in higher education.

“We want to find new ways to produce knowledge, so students are able to imagine the possibility of community that the politics we see on the ground are unable to produce on their own. We want to create the opportunity to think outside national and ideological boundaries,” El-Ariss says.

Asian studies at Dartmouth, says Associate Professor of Art History Allen Hockley, will also benefit from the restructuring. He says combining Asia and the Middle East “encompasses way too much geography, and that has complicated the definition of majors.”

“But it has consistencies,” Hockley says, “the primary one being that Buddhism is a religion that populated large parts of east and southeast Asia. Islam, as well, was in Pakistan and Bangladesh, and parts of Asia. Hinduism had a strong impact in Southeast Asia, particularly Thailand and Cambodia, but in what we call the Sinitic sphere, a combination of Chinese Confucian teachings and Buddhism cements the region.”

Existing courses will continue to be taught as interdisciplinary offerings multiply, says Hockley. “More courses will be co-taught by faculty from two different disciplines, and more guest speakers from across the curriculum will be invited into classrooms. For example, he says, he will teach Chinese art history alongside a Chinese literature professor. “It will be the first time two of us are in the same room at the same time working on the same issues in a general introduction to Chinese culture.”

Hockley says the restructuring will encourage “deeper dives into the territories each program encompasses.”