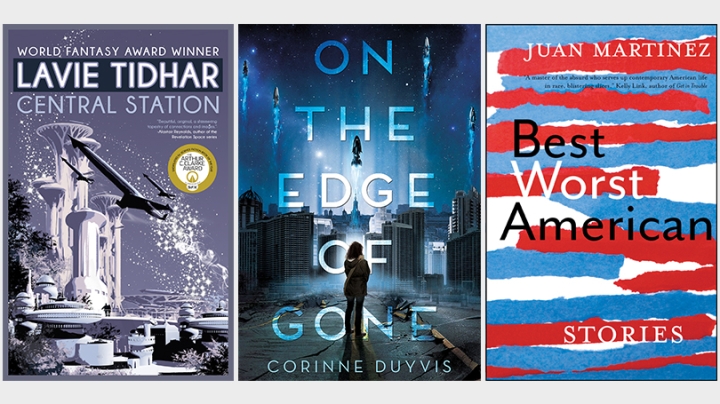 The Neukom Institute for Computational Science has awarded the inaugural 2018 Neukom Institute Literary Arts Awards in Speculative Fiction to three works of fiction that demonstrate that the future can be imagined as something other than a slick, techno-dystopia.

In the category of debut speculative fiction, the award goes to Best Worst American, by Juan Martinez (Small Beer Press, 2017). The co-winners of the inaugural prize in the open category are Central Station, by Lavie Tidhar (Tachyon Publications, 2016), and On the Edge of Gone, by Corinne Duyvis (Amulet/Abrams, 2016).

“We are proud to have a list of award winners that features such thoughtful artistic visions of the future, both near and far,” says Professor Dan Rockmore, director of the Neukom Institute. “We all wrestle with the uncertainty of the future—that is what makes speculative fiction such an important and necessary genre, and that is what makes each of these works so special.”

Among the award winners is an adult novel set in a future version of Tel Aviv, a young-adult novel with an autistic protagonist on a ship destined to depart Earth, and a short story collection set largely in the surrealist landscape of Las Vegas. With all of their differences in narrative approach, the books share a willingness to imagine a future containing love and acceptance rather than solitary heroism against dystopian collapse.

“These books prioritize valuable human relationships as prods to improvement of technologically and scientifically complex futures,” says novelist Maria Dahvana Headley, the principal judge for the 2018 awards. “The works are warm and hopeful, and they point to the true nature of science, in which solving human problems and failings is the goal, not shrinking the need for human engagement.”

The award winners each receive a $5,000 honorarium and will participate in an event at Dartmouth that will include a panel on the speculative fiction genre.

Martinez, winner in the debut author category, says, “I’m thrilled, humbled, and tremendously happy. I’m a huge fan of the writers on the shortlist, and it was a surprise to find myself in there; it’s an even bigger surprise to be among the winners.”

Tidhar, co-winner in the open category, says, “Writing Central Station, I was finally able to put into form many of the ideas on the future—of people, of machines, of communication—that occupied me since first loading a command line prompt, and since the first time I heard the siren call of a modem. I’m honored to be among the inaugural recipients of the Neukom Institute Literary Arts Awards.”

Duyvis, co-winner in the open category, says, “This was a highly personal book for me to write, and for it to receive an honor of this magnitude is thrilling both professionally and personally.“

The Neukom Institute Literary Arts Awards program was announced last year as an open competition to honor and support creative works of speculative fiction. The inaugural playwriting award, announced earlier this year, was given to Jessica Andrewartha for her play Choices People Make, which navigates a future dominated by artificial intelligence, but also struggles with the real-world issues facing today’s society.

In addition to the top book honors awarded to Martinez, Duyvis, and Tidhar, the Neukom Institute recognized eight other books by placing them on the inaugural award shortlist.

“All of the books recognized by the awards embrace the potential for a future involving the flesh-and-blood skills of empathy and tenderness, while still expanding on technical capacity,” says Headley.

A call for submissions for the 2019 Neukom Literary Arts Awards will be announced later this year.

“The best speculative fiction is brave enough to crystallize the possibilities of the future into beautiful and human stories that we can live with in our imaginations before we actually have to live in them. I can’t wait to see what next year’s participants dream up,” says Rockmore.