Jerome Friedman will give a lecture about quarks and spend time with physics students. 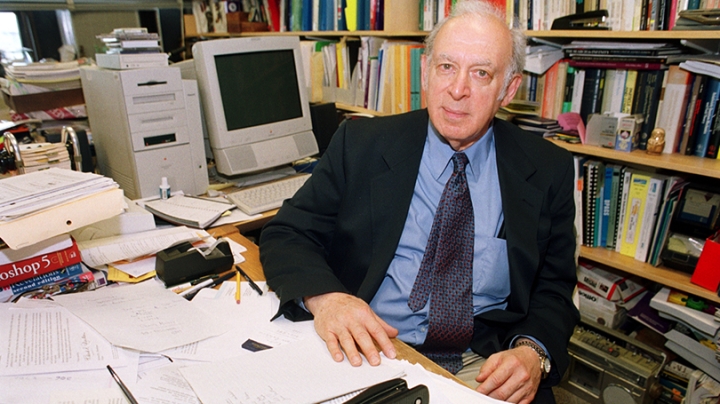 On May 9, members of the audience in Dartmouth Hall will learn about what they’re made of when Nobel Laureate Jerome Friedman gives a lecture titled “Are We Really Made of Quarks?”

The answer, says Devin Walker, assistant professor of physics and astronomy, is yes.

“But physicists did not arrive at this answer easily,” says Walker, who invited Friedman to campus. “The quark model, which embodied a radically new conceptual view of the structure of matter, was fiercely debated and generally rejected by the physics community. Its ultimate acceptance took well over a decade and occurred only after inescapable and compelling experimental evidence.”

Gathering and presenting that evidence is what earned Friedman, Henry W. Kendall, and Richard E. Taylor the Nobel Prize in Physics, honoring, according to the website, “their pioneering investigations concerning deep inelastic scattering of electrons on protons and bound neutrons, which have been of essential importance for the development of the quark model in particle physics.”

Walker says their discovery was made possible by particle accelerators—“think of them as powerful microscopes”—which allowed them to “probe and probe and probe until they found a nugget, something hard inside the jelly of protons and neutrons. That hard thing was a quark.”

Friedman, a professor of physics emeritus at the Massachusetts Institute of Technology, was an early mentor for Walker. “I first knew him when I was an undergrad,” says Walker, who earned his bachelor’s degree in physics from Virginia’s Hampton University and his master’s and doctoral degrees from Harvard. “Every time I went to MIT I would see him and say, here’s some work I am doing.”

The two physicists have something besides physics in common. “We both like art and classical music,” says Walker. “Jerry is an artist, in many ways.”

While on campus, Friedman will meet with small groups of students from the Women in Science Project (WISP) as well as the Physics 72 class.  “I hope they’ll get from him what I got as an undergrad,” says Walker. “The sense of the beauty and joy of doing science. What is wonderful about Jerry is that not only has he done just about everything you could do with a physics career. Most importantly, his humanity is far greater than his physics accomplishments.”

WISP members Amari Young ’21, Margaret Hubble ’21, and Megan Ungerman ’21 are among those excited about Friedman’s visit. “Just to get to know him and be in his presence, and understand what it means to dedicate your life to physics—that will be amazing,” says Hubble. “Seeing and hearing from physicists who have made great discoveries spur the next generation to get into physics,” says Ungerman. Young sees physics “as the answer to everything—to how we got here, and what ‘here’ is. There’s still a lot we don’t know about what we are made of, she says, but Friedman’s work has moved the world closer to finding the answers.

Description
In an article about her research team’s discovery that it may be possible to “split” photons, physicist Lorenza Viola compares split particles to pant legs. “It’s still one pair of jeans, but the footholes are far apart from one another.”
Logo
Image