‘Petrushka Project’ at the Hop: Two Ensembles, One Iconic Work

Creativity and technology combine to bring together two performances on two stages. 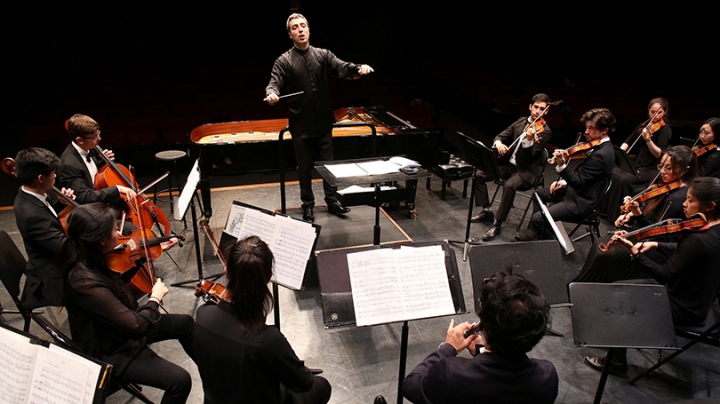 It began as a conversation over drinks last spring, between Dartmouth Dance Ensemble (DDE) co-leader Rebecca Stenn and Dartmouth Symphony Orchestra (DSO) Director Filippo Ciabatti. Wouldn’t it be great to collaborate? OK, so what music would Ciabatti most like to perform? Without missing a beat, he named Petrushka, Igor Stravinsky’s 1911 orchestral work.

Right away, Stenn and Ciabatti called ensemble co-leader John Heginbotham, and the three began hatching plans with others at the Hopkins Center for the Arts. One big problem, however: No Hop theater could accommodate both a full dance performance and the 65-member orchestra Petrushka calls for.

No problem: just turn two stages into one. And so it will go in The Petrushka Project, a groundbreaking undertaking on Friday and Saturday, May 25 and 26, at 8 p.m. at the Hopkins Center.

Moore Theater and Spaulding Auditorium, at two ends of the Hop, will be linked through cutting-edge simulcast technology. Audiences can choose to experience the project in either Moore or Spaulding. In Moore, they will see the dance ensemble onstage and hear the orchestra—which will be playing in Spaulding—through high-quality audio transmission.

Meanwhile, cameras in Moore will send live video of the dancers to the control booth in Spaulding, where it will be projected onto a wide screen above the onstage orchestra. Sound and images will be shared between the venues with no delay, thanks to 350 feet of fiber optic cable linking the control booths in each hall.

Each ensemble will also perform, on its own, its own set of material. For the complete experience, audiences can come to one theater one night and the other the next. The DSO’s set consists of two works by Maurice Ravel as well as another early Stravinsky work, while the DDE performs The Petrushka Papers, an original work of dance/theater designed to complement the main Petrushka performance.

“It’s so exciting to have practicing artists leading these ensembles and thinking creatively how they can come together in this amazing extravaganza of Petrushka, which will take place in not one, but two of our theaters simultaneously,” Mary Lou Aleskie, director of the Hopkins Center, says in the video about the project.

Ciabatti had long wished to lead the DSO in Petrushka. It’s from an interesting point in Stravinsky’s development, following his Firebird, which stayed close to earlier composers’ work, and just before his Rite of Spring, famously so new-sounding that the debut audience rioted. Petrushka is full of short, evocative vignettes that incorporate pleasing folk tunes as well as some harsh, less tonal moments. “It’s a movie-like piece," says Ciabatti. “There are many different elements. There are soloistic elements, there are the propulsive rhythms, there are a lot of intimate moments.”

It calls for a different type of playing from the musicians, so it stretches the DSO players, he says. “Stravinsky goes for the effect, the theater, the image—and images in life aren’t always pretty. So the music for this isn’t always pretty.”

Stravinsky composed Petrushka in collaboration with the famed Ballet Russe, led by the impresario Serge Diaghilev. Choreographed by Michel Fokine, the ballet tells the story of tragic-puppet title character—played in the original production by ballet superstar Vaslav Nijinsky—who suffers unrequited love for a fellow puppet and struggles against the manipulations of the puppet master.

In creating new choreography for the work, Heginbotham and Stenn decided to not try to retell that story but instead connect with the themes of “death and evil and love and sensitivity and humanity” the music evokes, Heginbotham says. “We fell in love with the music maybe more than the story, so we thought, what if we just follow our hearts and the rhythmical and melodic and orchestral elements, and follow these rather than address the story of three puppets?”

The resulting work is a series of short dance compositions that flow into one another, involving solos, duets, trios and larger groups.

Petrushka Papers performer Precious J. Kilmo ’18, a biology major who will spend next year on a fellowship at the Centers for Disease Control in Atlanta, only started dancing this year, joining the African dance troupe Soyeyo in fall. In spring, having finished her requirements for graduation, she decided to jump into contemporary dance and theater. “I wanted to do something different during my senior spring, a nontraditional class, outside of my comfort zone,” she says. “The instructors were very welcoming and really met us where we were.”

The class began by watching a film of a recent Petrushka production modeled on the original choreography and design, then learned about the heady atmosphere of the early-20th-century world of Stravinsky, Diaghilev and others—and the play of money, social connections, power, and sex. Then they launched into Wien’s text, devising staging and movement, including episodes of dance.

“I really enjoyed the class, getting to know my fellow students and the instructors, and learning in a different way about myself and how I create and how that can express itself through movement,” Kilmo says.